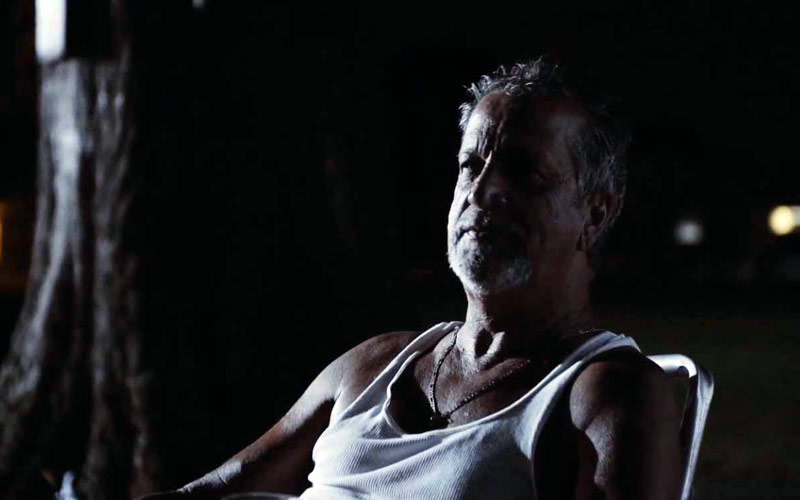 Eugenie Boisfontaine would have been 53 years old today, the day that a Discovery Channel reality series that follows the search for her killer, Killing Fields, ends its first six episodes.

“I want to find out who brutally murdered this poor girl,” Detective Rhodes “Rodie” Sanchez says in the premiere, and again throughout the series, which continually reminds viewers about the victim—at least, her name and her face.

Rodie is the star here, and it’s his story that gets the most attention: his desire to catch Eugenie’s killer long after his retirement; his relationship with his detective partner and with his adult son; the possibility cancer has returned to his one remaining kidney.

There is more attention to Rodie and establishing shots of Louisiana than to developments in the case, and in that sense, the series defies expectations for a true-crime documentary series. There is very little to speculate about; very little to get outraged over—beyond, of course, the death of a human being whose killer likely roams freely.

The focus on character over plot, however, is both Killing Fields‘ strength and weakness. Six episodes in, Eugenie remains as much a mystery as her killer, because Killing Fields is much better at establishing something than developing it.

When there’s action, the series moves: it creates tension well, and there is some high tension in Tuesday’s finale (which is not quite the finale, since another six episodes will air sometime in the near future). There are only a few big dramatic scenes, but even phone calls and DNA test results have weight and pull us into the moment.

There’s also welcome attention to detail that really brings the place and its people to life yet, for the most part, the production of the show fades to the background. It doesn’t feel overly heavy-handed. Sure, there are visible tricks of the reality TV trade, primarily quick cuts to reaction shots that feel like they came from a slightly different place and time, plus the picked-up audio that smooths out rough transitions. But Killing Fields mostly manages to create the perception that we’re just dipping into the lives of its characters—which, of course, we are.

The atmosphere pours from the television so much you can feel the humidity, and from emerges from that haze most often are portraits of two men, Rodie and his partner Aubrey St. Angelo. Their banter has its foundation on amusing cross-generational teasing, and is delivered in their perfectly imperfect sentences and drawl.

The presence of cameras in their lives as they work this cold case has captured some small but substantial moments. Rodie kneeling down next to a fence with his adult son, not making eye contact as he struggles to hold back emotion about the kind of absent father he was to his kid. Aubrey coaching his son in a batting cage, worrying that the case is consuming him. Rodie’s narration, from a dimly lit chair in what seems to be his front yard, in which he speaks words that could form the script for True Detective season three.

Yet what we see of Rodie and Aubrey really are portraits in the truest sense of the word: one-dimensional images that are repeated so often, they begin to feel posed. They are, of course, real people working a real case, yet outside of their workplace, moments feel produced, in a let’s get your son and his family together so you can talk to each other about fatherhood way.

A job taking priority over parenting is one of the themes that emerges and connects the people working the case. Yet though Killing Fields establishes these things very well, far too often the series resorts to Amazing Race-style development—just hitting the same note over and over again, without ever taking it anywhere.

The problem of repetition, repeated

Although there have been steps forward in the case over the six episodes, what stands out the most, alas, is the repetition.

The start-of-episode recap that repeats previously broadcast footage is understandable and well-done; the post-commercial “watch way too much of what you already watched” segments after each act break are annoying, but pretty standard for an industry that doesn’t trust its viewers even, it seems, on shows that aim higher. But what’s repeated in those moments is only the start of the repetition.

The same photo of Eugenie Boisfontaine; the same clip of Rodie saying “her body was dumped in a raggedy-ass killing field over there … like a piece of trash.” The same slow-motion b-roll; the same shot of a car on a dirt road; the same aerial shot of the courthouse. Rodie saying he put his job before his family; Aubrey worrying about the same.

Killing Fields is a show that continually plays the same hand, so much so that’s maddening at times, leading me to reach for the fast-forward button.

As a result, the episodes can feel like an overstuffed slog at times, which is unfortunate because there are pieces that move the story forward, and moments of quite thrilling action. I am a big fan of developing character and atmosphere; it’s what’s missing from so many unscripted series. But in many ways it feels like Killing Fields doesn’t quite know how to get where it wants to go.

With the production challenges of filming in real time, a lot of that is understandable. It’s hard to shape a story and develop characters when you don’t know the arc of the story. (See: Big Brother’s storytelling versus Survivor’s for infinite examples of this.)

Yet, without giving anything away, it’s revealed in the finale that its big moment actually happened on Dec. 9—two months ago.

I don’t want to minimize the work it takes to produce a high-quality series, nor suggest that two months is not still an extraordinarily fast turnover. (Just look at the 10 years it took to create Making a Murderer.)

Yet for a show that pitches itself as “shot in real time,” that is a remarkably long window, never mind that it’s been filming since August. Since that major finale moment happened before the series ever started airing, it’s hard not to shake the feeling that there’s not much happening here, which is why all the repetition is necessary, to fill time until maybe, just maybe, something else will happen.

The murder of Eugenie Boisfontaine is a cold case that may stay cold, but it’s certainly not for a lack of trying or passion on the part of those trying to solve it. Killing Fields, too, has tried, but it has not yet succeeded. But like the investigation, it will continue.