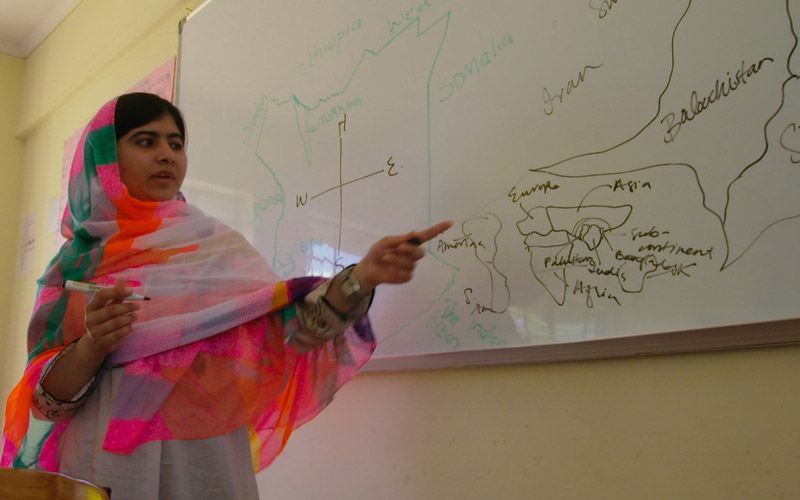 He Named Me Malala is Davis Guggenheim’s fifth feature-length documentary film, including the Oscar-winning An Inconvenient Truth. He was also nominated for a Grammy for From the Sky Down, a short documentary about U2 recording “Achtung Baby.”

Yet he told me that He Named Me Malala, which has its world television debut tonight (National Geographic Channel, 8 p.m., commercial-free), “was the most difficult movie I’ve ever made.”

That’s not because of its subject, Nobel Peace Prize Laureate Malala Yousafzai, who was shot in the head on her school bus when she was 15, retribution for talking publicly in part about education for girls. (Her memoir is I Am Malala: The Girl Who Stood Up for Education and Was Shot by the Taliban.)

While Guggenheim told me he almost didn’t direct the film because he wasn’t sure he was qualified to tell her story, the challenge came in structuring that story.

“More and more, I’ve resisted telling stories in a linear way,” he said. “When you take away the linear structure of a story, it makes you focus on other things. In this case, I sort of had to. If I did it linearly, she would be shot and recover in the middle of the movie, and everything after that would be her living in Birmingham [in England], and all the tension would go away.”

“This was the most difficult movie I’ve ever made, because it’s non-linear, because I’m intercutting between times before she was shot and time after she was show,” he said. “It was really hard to put it together. The middle of the movie is not an easy structure for an audience to watch.”

There are difficult moments in the film, though the most graphic images are aftermath, like images of the bloody vehicle where Malala and her classmates were shot. While the film has sent these images, and Malala’s story, life, and humanity, to theatres around the world, being on television makes it even more accessible.

“Not every girl who needs to hear this story can go buy a ticket to a movie theatre, so to have NatGeo and its reach is very special,” Guggenheim said.

Animation adds to He Named Me Malala’s authenticity

Guggenheim’s film shows to Malala to both an average teenage girl (watch her try to show her father how to tweet) and an impressive, courageous activist. She’s the star, for sure.

Her father is also a prominent character, in the film and in her life, and he’s a key figure. “In the movie—and in the title of the movie, He Named Me Malala—is this central question. Did he create this girl? Is she just a product of his making or is she her own person? I think when you have your own kids  you realize there’s no right answer to that. You’re often influencing your kids but they also have their own free will,” he told me. The film doesn’t explicitly answer the question, though: “I prefer movies where the filmmaker floats a question and the audience has to draw their own conclusions.”

Beyond them, the most impressive part of the film may be its animated sequences, which are truly stunning. But why is there animation in a documentary?

“We have been bombarded of footage from Afghanistan and Pakistan, and violent stories from this part of the world, and the stories they were telling me were the opposite—they were these charmed, beautiful stories,” Guggenheim told me. “The footage that I had from this area is not that, so I needed something to capture that sense of romance and paradise they were describing to me. … The more they were telling me this story,” he added, “I realized I couldn’t—I didn’t have footage for that. Animation seemed to do both those things.”

For me, the animation felt more authentic, more real than, say, a reconstruction or reenactment (there are a few moments of b-roll reenactments in the film), and I asked Davis Guggenheim if that was part of his intention.

“I think there’s something to what you said,” he said. “On a literal level, the animation is not, quote-unquote accurate, but it captures a feeling which feels accurate. It’s an interesting thing about documentaries. Maybe 50 years ago, there was an impression that documentaries are accurate and truthful. Those are really mushy words now—they’re mushier than they were then, but they were always a little bit mushy. Even the very first documentaries had things that were changed. I think more and more documentaries need to be truthful.”

“There is accuracy and there is truth. And then there’s the perception of, Does this feel right? The audience has to trust the filmmaker that that’s right, even though certain things aren’t necessarily quote-unquote accurate,” he said. “If you look at Steve Jobs, here’s a totally scripted movie about a real person, and there were a lot of things that were out of place there that I really rejected as an audience member. In that amorphous sense of what is truthful, I felt that movie was off, and took advantage of a real story and manipulated it—even though, maybe, some of the things in it are accurate.”

Guggenheim filmed Malala and her family “on and off for two years,” a total of about 18 months of filming. During that time, he also showed cuts of the film to them.

“I always show the subjects of my movies the movie,” he said, and compared this process to what happens in reality television—a genre he watches with his family: “my family’s deep into The Voice,” he said, and told me that he and his wife, Elisabeth Shue, used to watch America’s Next Top Model together.

But while he loves the results, that methodology some producers use to get there doesn’t work for him.

“In a documentary, that’s kind of dangerous,” Guggenheim said. “To me, it’s more like, I want you to trust me and vice-versa. Let me help you tell your story. I see myself as more of a midwife more than someone who’s trying to chase a subject.”