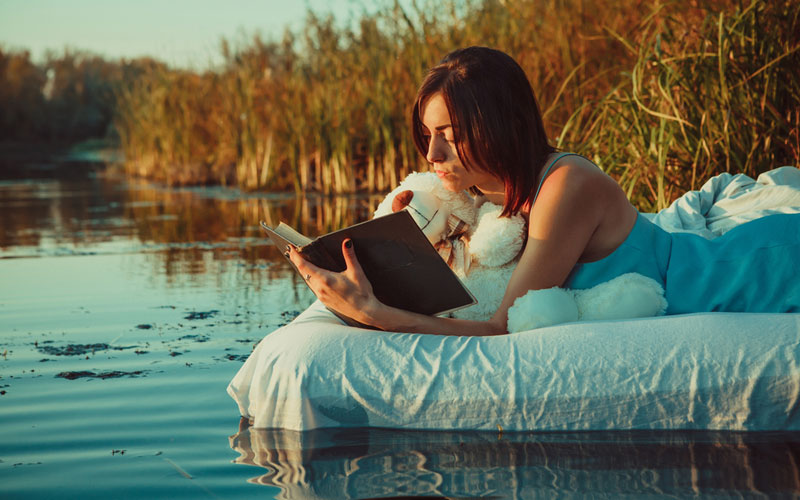 I don't know what's going on in this photo, but I'd love to how Umberto Eco would analyze such a stock photo that illustrates a story that's in part about his work. (Photo by Shutterstock)

On Friday, two writers known best for their fiction both died: Harper Lee, who wrote To Kill a Mockingbird, and Umberto Eco, who wrote The Name of the Rose. Both were writers of exceptional talent, and both, in some ways, contributed to our understanding of reality TV.

I don’t want to diminish their contributions to literature or make a flimsy argument, like the title of this story may actually do. Instead, my intention is to pay tribute to their lesser-known contributions to the world of nonfiction entertainment, as both did work that influenced and/or explained popular culture—work that has a clear connection to reality television.

Umberto Eco, the Italian writer and philosopher, may be best known for his novel that was adapted into a film starring Sean Connery and a young Christian Slater.

Among his nonfiction writing, however, was an essay, “The Phenomenology of Mike Bongiorno,” that analyzed, in Eco’s words, the Italian game show host’s “absolute mediocrity” and “immediate and spontaneous allure which is explicable by the fact that he betrays no sign of theatrical artifice or pretense.”

How Ryan Seacrest does that sound?

There was also “Travels in Hyperreality,” Eco’s intensely readable title essay from his collection, in which he goes on a journey through America’s obsession with fake things that become real. Eco writes that he is “in search of instances where the American imagination demands the real thing and, to attain it, must fabricate the absolute fake; where the boundaries between game and illusion are blurred…”

Later he writes that “America wants to establish reassurance through Imitation.”

While his journeys take him to actual, real places—Disneyland and Walt Disney World, wax museums, the Hearst Castle, for just a few examples—and not television, it is clear that he is describing the foundation on which reality television will be constructed.

Nonfiction entertainment and reality television are not unique to the United States, but they clearly have been nourished by an obsession with imitations standing in for the real. We have long been a society consumed with taking real things and turning them into fakes, and then interacting with the fake—the hyperreal—as if it were real, because, well, it is.

Harper Lee was the Rachel to Truman Capote’s Quinn

Truman Captote’s “nonfiction novel” In Cold Blood turned facts into entertainment, much like reality television does. But to get those facts and the vivid details he recounts in the book, he relied on his childhood friend, Nelle Harper Lee.

Her contributions make her a sort of early reality television field producer, the unseen the Rachel to Lee’s Quinn, if I can compare UnReal and In Cold Blood.

The Witchita Eagle interviewed two people, including the man who prosecuted Dick Hickock and Perry Smith, who dismantle the myths about Capote’s work on the book. For example, Duane West says that Capote’s insistence that he wrote from memory is “ballyhoo,” because “Harper Lee was at his side, taking notes the whole time.”

Washburn University’s Thomas Fox Averill says Harper Lee “got Capote past that bad first impression. She’d get people to get to a second impression of him.”

Although Harper Lee delayed her own writing to help him, incredibly, Capote didn’t really contributions beyond dedicating the book, in part, to her. In George Plimpton’s 1966 interview with Truman Capote, Capote acknowledges some of her contributions, though he soft-sells it, starting by saying Nelle:

“kept me company when I was based out there. I suppose she was with me about two months altogether. She went on a number of interviews; she typed her own notes, and I had these and could refer to them. She was extremely helpful in the beginning, when we weren’t making much headway with the towns people, by making friends with the wives of the people I wanted to meet. She became friendly with all the churchgoers.”

Without that, Capote wouldn’t have had the material he needed to develop real people into characters, to make nonfiction entertaining.