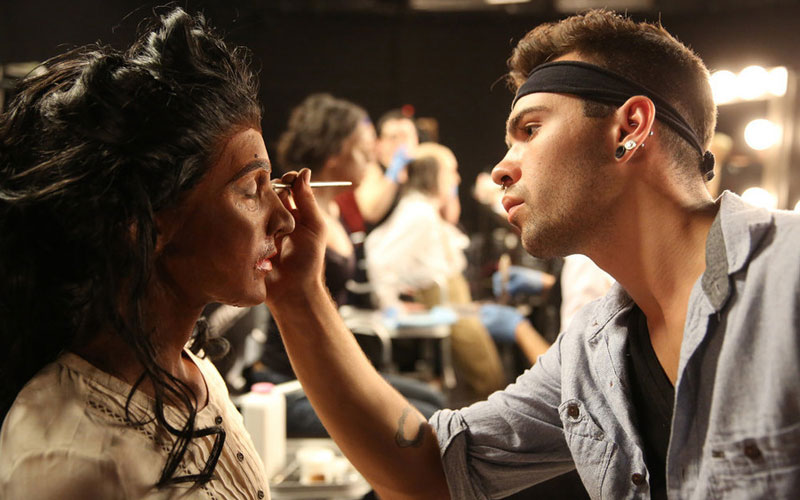 No, Kaleb, no no no. (Photo by Jordin Althaus/Syfy)

One of my favorite challenges in the history of Face Off is the season-one challenge, where the contestants made themselves up to look like other people and then interacted with their own family members, to see if they’d be recognized. The results really showcased their talent.

So I was ecstatic when McKenzie announced the challenge for episode four, “Covert Characters,” even though it was framed as cross-promotion for Syfy’s new show Hunters: create a realistic disguise for their model. How exciting! We’d finally get to see something different and new.

Alas, the results were terrible. Even the top two were pretty bad. The makeups looked plastic, like the kind of cheap masks that some of the designers should have used to cover up what they actually created. Worse, attempts to changes models’ races turned into, at best, exaggerated stereotypes. Nigel called out Kaleb’s attempt to create an Indian woman for what it was: “I feel I’m looking at a Caucasian person who’s been painted brown, and that, of course, is a huge problem.” Yes it is.

This season’s cast hasn’t been as impressive as previous seasons, but they have been successful at killing my desire for a future realistic makeup challenge. The difficulty of the challenge and/or the contestants inability to handle it may just explain why this kind of challenge is so rare.

If I ever have the desire to see this kind of challenge again, I’ll just watch this video—though the really scary part is that these morphs actually improve the make-ups, which looked far worse on the reveal stage.