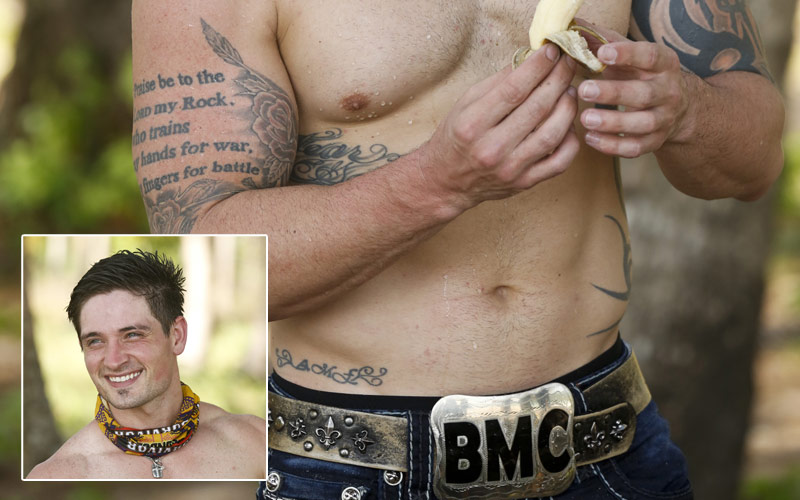 A close-up of Caleb Reynolds' belt, which is an acronym for his nickname, Beast Mode Cowboy, with an inset of his head from the same picture. (Photo by Monty Brinton/CBS)

On Big Brother, Caleb Reynolds called himself “Beast Mode Cowboy.” That’s why, on Survivor Kaoh Rong, he’s wearing a massive belt buckle with the acronym “BMC” on it. But it turns out not everyone hears beast mode when the Survivor Kaoh Rong cast member’s nickname is spoken, especially by him.

A friend messaged me today to say that he, too, desired “B-Smoke Cowboy cuddles,” a reference to Tai asking to cuddle with Caleb for warmth on the second episode of Survivor.

I thought this was a play on words, perhaps a way of saying Caleb is smokin’ hot. But no, it turned out that he thought Caleb was calling himself “B-Smoke Cowboy.” And this is someone who also watched Caleb’s Big Brother season.

But he is not alone! A cursory search of Twitter and Google turned up the following variations on Caleb’s nickname, and there’s even a 2014 Reddit thread about mishearing it. And these are not intentional misspellings, like ones that reference Caleb’s unrequited crush during BB16.

A list of what people have accidentally called Caleb Reynolds

Am I missing any? Send them to me!