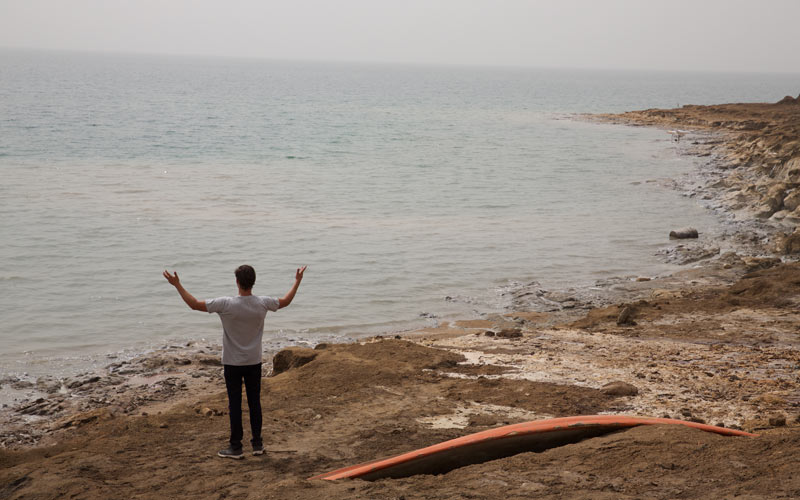 A show that features “kiddy psychedelia” and, according to its host, creates “existential panic” in its viewers doesn’t seem like the kind of show to debut as a cable network’s highest-rated series ever. But that’s the magic of National Geographic’s Brain Games, which starts a new season on Sunday of illustrating what’s happening in our minds.

The new episodes are twice as long as before, and were filmed in new locations: New York City, New Orleans, Philadelphia, Colorado Springs, and the New Jersey shore, plus Jerusalem and London. With just six hour-long episodes, though, it’s actually shorter than last season (which had 16 episodes), and about the same running time as some earlier seasons.

When we talked in January, Jason Silva told me that the extra time means that each episode can have a “bigger arc, more of a journey,” and added that, “every time we’re in a different location, then the location is integral to the theme of each episode.”

For example, he said, “We shot in Jerusalem for the god brain, the neuroscience of religious experience; we shot in New Orleans for the seven deadly sins, the brain on greed, the brain on lust.”

For Silva, whose improvised philosophical musings can be found in his YouTube series Shots of Awe, said that the episode filmed in Jerusalem is his favorite “because I think it’s probably the most philosophical episode of Brain Games we’ve ever done. What’s happening empirically in the brain when people think they see God? Is it something that’s reducible to chemistry? Is God an altered state of consciousness? Is religious devotion like a drug, like a psychedelic experience?”

Brain Games, the blue dress, and The Wizard of Oz

Going into this sixth season—sixth if you count the first three pilot episodes—Silva said he’s “blown away by how well it translates” internationally, and how popular and well-known it is. “I think an example of the power of that,” he said, “is the viral dress thing that happened last year. People thought that was a guerrilla [marketing] campaign from Brain Games.”

Silva doesn’t want the show to get into a complacent rut. “I think my biggest fear is—you don’t want to repeat yourself too much,” he told me. “There’s only so many optical illusions you can do before it becomes the optical illusions show. I’m a very philosophical person, and I’ve always felt, for me, the games are a means to an end. But it’s the takeaway. What does this game tell me about my reality or my perception of reality?”

Talking about the dress—which to me looked blue and gold, because my brain is clearly broken—Silva said, “Why do people get so emotional about something fundamentally trivial? Because there’s nothing trivial about being told that your perception of reality has cracks in it, there’s nothing trivial about being told that your certainty about the world is being called into question. That creates a kind of existential panic, and I think all the games on Brain Games have the potential to cause that feeling of anxiety.”

Anxiety, panic, and ratings? Perhaps all those viewers share something with Jason Silva, who told me, “I find knowledge reassuring, even if what the knowledge tells me is unsettling, I feel empowered from the fact that, at least I know. I can cling to that.” As a child, he said, “explanations were like a narcotic for me.”

“The world is weird and this show reminds you of that,” Silva continued, “that you kind of live in this perceptual bubble, a lot of it created by expectation and cognitive biases and cultural conditioning. There’s a kind of psychedelic quality to Brain Games wrapped up in a kid-friendly package. Kind of like Alice in Wonderland and The Wizard of Oz. It is kiddy psychedelia in a way. I don’t think people realize that, but I think they feel it.”