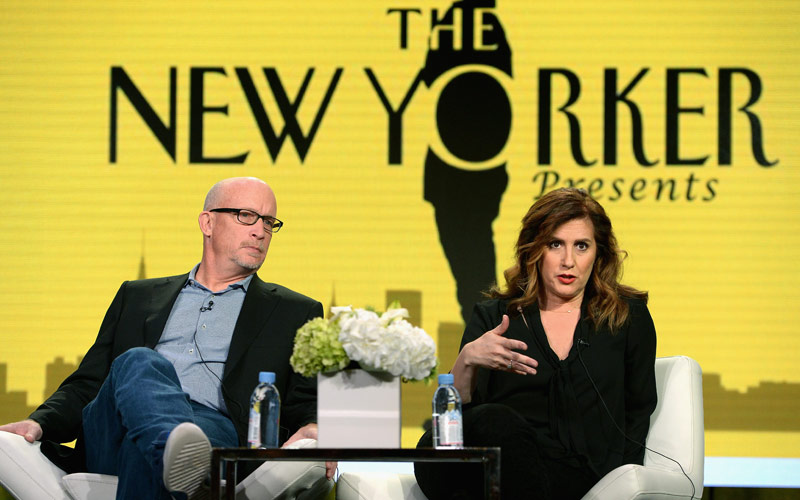 More than one year after The New Yorker Presents’ pilot episode went online, Amazon’s first unscripted series has debuted its first two episodes. In a shift for Amazon, the episodes are being released two per week, and are standalone, not serialized.

Each half-hour episode is broken down into smaller pieces. Like the magazine, it’s a collection of nonfiction stories, all by different filmmakers, and also includes poetry and fiction. There are even The New Yorker’s iconic cartoons, which come to life on screen, cameras looking over the artists’ shoulders as they draw an actual cartoon for the magazine.

“We’re trying to mirror the magazine wherever we can,” executive producer and showrunner Kahane Cooperman told me when we talked at TCA last month. In the magazine, she said, “you’re dipping into many different worlds through many different voices; in a different way, the series does the same thing. There’s nothing quiet like it I’ve seen on—I’m going to say television, but that’s not really the right word any more.”

Cooperman produces the series along with Gibney, the Oscar- and Emmy-winning documentary filmmaker. When Cooperman left her job as a producer at The Daily Show last spring, Jon Stewart called her “a rock and a fount of insight and talent” after pointing out that she was “one of the first people ever hired at The Daily Show with Craig Kilborn.” (On her last day, the show’s moment of zen was a clip of Dazed and Confused, in which she briefly appeared.)

Amazon used the same model it does for its scripted shows for its first reality series, putting the pilot online for free, and collecting information. While there are now over 1,400 comments on Amazon’s page for the series, that feedback did not affect the show’s development. “I didn’t read any comments on the pilot,” Cooperman told me. (She was hired once Amazon decided to order a full series, long after the pilot was produced.)

Gibney said that viewer feedback contributed only in aggregate. The pilot “got enough positive feedback so we got to do the series,” he told me. “They take feedback but it’s not necessarily some kind of ratings number they apply across the board. It’s a combination of the qualitative and quantitive, as far as I understand it.”

What’s changed in the year since the pilot? While the incredible opening sequence—it’s truly stunning, a visual masterpiece—remains the same, its conclusion will vary every episode. Also, Nick Thorburn, who did Serial’s music, has also composed a new theme song.

Perhaps the biggest change is that the show is more connected to both The New Yorker and New York. “The magazine is iconic, and it is an icon of the city, of New York, so I felt like it gave us license to also explore New York,” Cooperman told me. The show “dips into all these different worlds with our interstitials,” including behind the scenes at the magazine itself.  “You can’t just have a group of films. You have to have something that shows that, even though these films are totally different in structure and story type … you need something to feel like they’re all from the same universe,” she said.

That said, there is no unifying theme to each episode—except one, which will be focused on food, “in the same way that there is occasionally a theme for the magazine,” Cooperman said. She pointed out that the stories, not the theme, came first.

“The series itself strives to do that the pilot, frankly, probably didn’t have time to think about beyond the pilot was to create the universe that these are all from,” she said. “In between all these pieces, we delve into—with a minute here, a moment there—a little behind-the-scenes at The New Yorker itself. I really felt strongly: that’s where we start, that’s the root of all of this. That’s the history; that is the standard.”

In its new episodes, The New Yorker Presents tries to “tip our hat to them as much as we can,” Cooperman told me—and producers also tried to up its own storytelling game.

“We got more bold in our individual films that we were doing,” she said. “The words that I kept hearing from Amazon were, ‘Please take risks, please take risks.’ We were able to get all these filmmakers who were excited about being visually bold and deeping really deep into their stories—it’s not that people weren’t trying to do that with the pilot.”

Reality offers ‘a sense of surprise’

The documentary stories in The New Yorker Presents are based on stories in the magazine—except for one, Eugene Jarecki’s piece about a trip to Cuba. But in contrast to the length and depth of The New Yorker’s literary journalism, the show’s pieces are brief.

“What you’re getting is not a grand, long narrative—it’s like the difference between a novel and a short story,” Gibney told me. “Particularly with some of these longer nonfiction pieces, you can’t go deep into a story that’s already going deep at some breadth. You have to find a portion; you have to find a section.” For his contribution, an episode one story based on a 2006 Lawrence Wright story, “The Agent,” Gibney “narrowed in on one very small section of it, and just focused on that.”

The filmmakers have to find a “key theme or key element,” but what’s in the series isn’t just a retelling. “Sometimes because of the visual nature of the medium, it explodes in an emotional way that may be the different from the written piece. Sometimes it takes the voice of the author and uses it to create a kind of essayistic look,” he said.

Cooperman gave some examples, saying that director “Lucy Walker did this incredibly visually bold piece about a chef in LA,” while the “Jesse Moss did a really powerful piece about the Albuquerque police department.”

By bringing true stories to life true stories from the pages of a magazine in visually interesting and cinematic ways, The New Yorker Presents is contributing to reality television’s growth as an art form.

I asked them what they thought of the genre as a whole, and Gibney said, “I think unscripted is taking over in a really interesting way. Because it operates outside genre conventions, it provides a sense of surprise that you don’t get otherwise. Serial proved that, I think Jinx proved that, I think Making a Murderer proved that. At the same time, nonfiction filmmakers have upped their stylistic game in terms of being able to be visual storytellers in a way that is both appropriate to the subject but also peculiar to them as individuals. They’re authored pieces.”

Gibney compared where nonfiction filmmaking is today with the advent of New Journalism, and Cooperman agreed.

“This is a literary comparison,” she said, “but In Cold Blood—to me, that’s a great example of what all these pieces can be, where you take something that’s real and happened, but you present in this artful, compelling way. The goal would be for every element of our show to do that.”