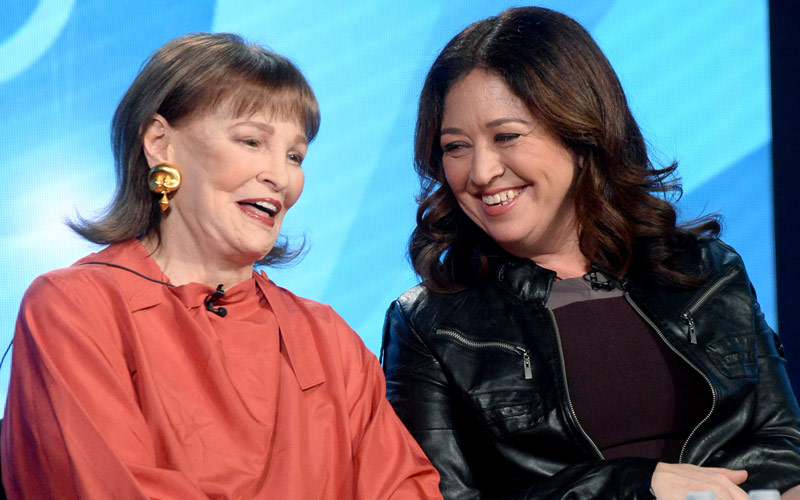 The only woman nominated for an Oscar in the documentary feature category, Liz Garbus, right, with Gloria Vanderbilt at HBO's winter TCA session. (Photo by Jeff Kravitz/FilmMagic)

The Oscar nominations for documentary feature film were announced this morning, and here are the nominated films and their producers (with the director identified):

Notice that there is one female director in that list, Liz Garbus. Of the 15 shortlisted films, those eligible to be nominated, there were only two films directed by a woman (Heart of a Dog) and one co-directed by a female (Meru). The other categories—and Hollywood in general—have a huge diversity problem, too.

Before the nominations even came out, the Academy’s tendency to nominate white men as documentary film directors was called out in a Jan. 2 Facebook post by entertainment lawyer Victoria Cook. That quickly sparked conversation among some in the industry. (A version of her post was later posted on Indiewire.) This is Cook’s central argument, from the Indiewire version:

“There has been a lot of long-overdue talk recently about the underrepresentation of women and people of color as directors in the entertainment industry as a whole (e.g., the multiple articles in the New York Times this past fall, culminating in the November 20th Sunday Magazine cover story by Maureen Dowd; the federal government’s Equal Employment Opportunity Commission investigation; the coverage in Variety, Fortune and Forbes, among many other major publications about the fact that in 2014 only 7% of the top 250 movies were directed by women, etc.). Much of the public conversation surrounding this issue has paid particular attention to the underrepresentation of women in the major categories at the Oscars. But there has been no similar outcry about this also being a pervasive problem in the documentary category, despite the fact that in the past 20 years only one female director (Laura Poitras) and one female co-director (Zana Briski) have won in the Best Documentary Feature category.”

Cook offers some interesting arguments about why there’s been a lack of attention, and concludes with this:

“it seems like a good time for the documentary community to recognize that it suffers from the same problems as the entertainment business as a whole.”

Shortly after her essay began circulating on social media, but before the nominations came out, I interviewed Davis Guggenheim (whose film He Named Me Malala was one of the 15 films shortlisted for the nomination but wasn’t actually nominated; it will air on National Geographic Channel Feb. 29).

I later talked to the two people who together are producing Amazon’s first unscripted series, The New Yorker Presents: Alex Gibney (shortlisted but not nominated for Going Clear: Scientology and the Prison of Belief) and Kahane Cooperman (who won four Emmys as executive producer of The Daily Show with Jon Stewart).

In all three interviews, I used the opportunity to discuss Cook’s post and argument briefly. Here are their thoughts, which start with a conversation between Cooperman, whose lawyer is actually Victoria Cook, and Gibney, who wasn’t familiar with the post.

Alex Gibney: “It’s still a problem, both in terms of ethnic representation as well as female representation, but it’s less of a problem, interestingly enough, I think in the nonfiction space than it is in the fiction area.

Gibney: “It’s there—it’s not where it should be. I’m just saying, I can think of a handful of very talented female directors who are making nonfiction films.”

Cooperman: “There’s a big conversation going on right now based on something that my lawyer actually posted, and it’s about how everyone thinks that documentary doesn’t have the female problem, but when you look at it, it actually completely does. What she posted literally on Facebook has now been picked up, and there’s now this huge dialogue going on. It’s just in the last week and a half.”

Cooperman: “It was essentially like, We’re coming up on awards season, and it’s made me look and think that at the same time we have this four percent number for female in the feature world. What is it really for docs? Docs have always been seen as pretty strong…”

Cooperman: “It’s not that exact same number, but it is still an issue.”

I almost didn’t take this movie [He Named Me Malala] because I thought, Well, maybe a woman should direct this. And then I felt like, Can I do a good job? Yes, I can do a good job. Am I uniquely qualified because of my work in education?

But yeah, I think about it a lot. I have two daughters, and I certainly think films will be better if there are more female directors, for sure. […] The short answer is there needs to be more, for sure. There’s a lot of men in documentaries, and that has to change.”