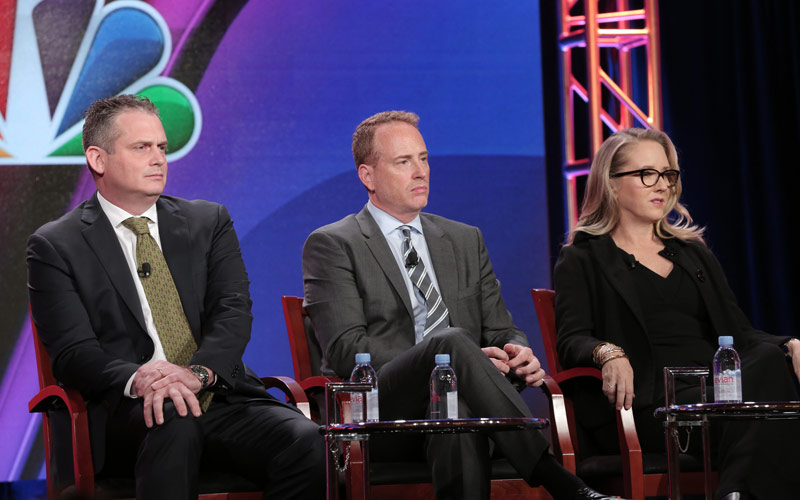 If NBC was looking for a no-nonsense man who excels at barking down perceived stupidity to host The Apprentice, it should have looked no further than its reality TV executive, Paul Telegdy. This morning at the Television Critics Press tour, he Trump-ily responded to a question about NBC’s perceived hypocrisy over its firing Trump and then hiring him to host SNL, among other appearances.

You may recall that NBC dumped Trump not because he was running for president, but because, and I quote, “the recent derogatory statements by Donald Trump regarding immigrants.” (Read the full statement.) That was June; Trump’s xenophobic tirades have only multiplied since then. By the time he hosted SNL, he had made many, many more “derogatory statements.”

So why did NBC want him back? That was the subject of three separate exchanges during a press conference this morning.

Things started pretty well. Bob Greenblatt, NBC’s entertainment chair, was asked if the ratings were worth the criticism. He said:

That’s a pretty honest assessment, basically an admission that ratings are what matters. It’s cold but true, and the candor is appreciated.

“And I think he’s probably good fodder for comedy as well.”

This would have been a good point, had SNL actively made fun of him. Instead, as the New York Times said in its review, “Trump said he hosted the episode to show he could ‘take a joke,’ but SNL hardly threw any his way.”

How does NBC justify its Trump hypocrisy?

But let’s move on to the next question about Trump. Another journalist pointed out that NBC “tried to cut ties, distance yourselves, he’s a bad guy,” and later is being heavily promoted as SNL host. The reporter asked: “How did we get from one extreme to the other, and how do those two positions reconcile themselves?”

“I think what we said is we wanted to be out of business with him. We had a couple businesses that we were doing with him, Apprentice and the pageants. We got out of that business, got out of both of those businesses, and that was June, July, when most of us thought he would be waltzing into the background of the political arena. And lo and behold, he’s—as I said—the front-runner, and the poll numbers are sort of astounding, and he’s everywhere. He’s on every news show, every morning show, every nightly show, every cable news show. He’s been on Colbert. He’s been on Fallon. He was on SNL, and I think that reconciles quite easily with we’re not in business with him, but he’s one of the most love it or not, one of the most important political figures of our time.”

“I think those shows’ responsibility is to bring on relevant guests whether you love them or hate them. They’re known for that, especially SNL, and they have to sort of stand by that.”

After being asked a follow-up about “how the public might be confused with what ‘being in business’ means,” Greenblatt said, with a tone that I read as annoyance:

“Is it being in business with us? We book thousands of guests on shows year- round. He was actually on SNL less time than he’s been on other shows on our network, and he was on Meet the Press this weekend for an hour. I don’t think the public was confused as much as the press and some special interest groups.”

Before the journey into the rarely traveled land of Executives Annoyed at Having to Defend Their Actions, both Greenblatt and Salke made a decent point: shows like SNL or The Tonight Show book guests (and in SNL’s case, hosts), and that’s a very different kind of transaction than a network having an entire series with someone as its star and executive producer. Of course, both booking a guest and result in ad sales, attention, and profit.

NBC execs baffled that we don’t understand its hypocrisy

Toward the end of the press conference, there was this exchange, during which things got increasingly tense, with some annoyance and hostility dripping in toward the end.

Question: Going back to the Trump question.

Question: “When the split came and NBC released the statement that said, ‘Due to the recent derogatory statements by Donald Trump regarding immigrants, NBCUniversal is ending its business with Mr. Trump at NBC. Respect and dignity for all people are cornerstones of our values’. So when you have him as a host of Saturday Night Live, isn’t that sort of a sending a mixed message, a contradiction?

Greenblatt: Well, I think that if we were in the business of never having anyone guest on the network that had views that disagreed with our views, we would be out of business. And I’ll go back to what I said before. Whether we agree with him or not, he is in a very visible position in our electoral process coming up.

Question: But you made a definite…

Paul Telegdy: Sorry. Both of those statements are true. […] You’ve either got a good memory or you’re reading it from somewhere. We severed all business relationships with Donald Trump—both statements are true. That doesn’t prevent you from booking someone who is in the public eye on a news program or an entertainment program if they’re either newsworthy or you think they’re entertaining.

Does that answer the Donald Trump question? It is clear to us, and it’s clear to the people that produce in our news division and our entertainment division what the differences are.”

The differences, yes, are clear, as is Telegdy’s defensiveness.

That’s understandable, though: It’s hard to defend explicitly severing all ties with someone—while citing the “cornerstones of our values”—and then reversing that decision months later.