Along with Akbar Gbaja-Biamila, who’s been on the show since season five, Iseman provides color commentary that is highly energetic.

And the spin-off series, which airs at 8 p.m. ET tonight and has two contestants racing on a course at the same time, was more of a challenge for both its contestants and its hosts.

“It was actually harder, because being enthusiastic, I was yelling the whole time,” Matt Iseman told me when we talked earlier this month at TCA about the new series.

On each episode, four teams of three compete; the winners of those rounds face off in a relay run on a longer course, with that winning team moving on to a later episode.

“I can imagine the audio guys going, Tone it down, Iseman! But I hope people really enjoy it, because watching it live it was just crazy. It was always, always action. Even if there was a big, seemingly insurmountable lead, things could change. No contest was ever over because we had a two-point final round. The races were coming down to literally photo finishes.” 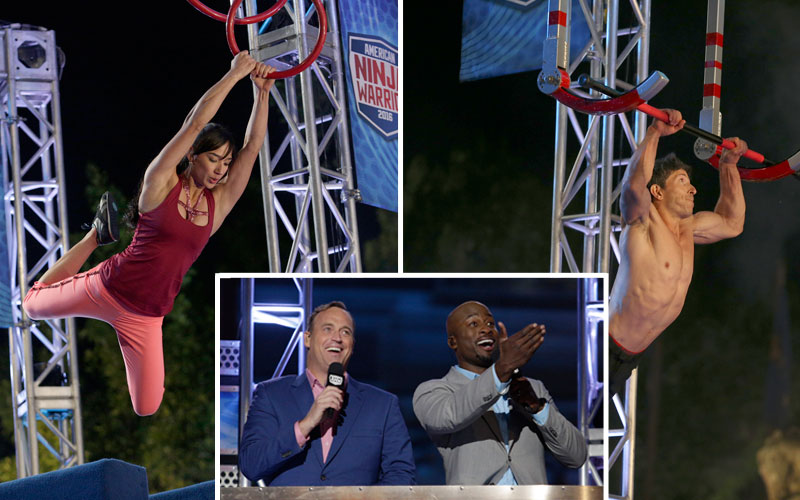 A comedian who started out as a doctor—he has an MD from Columbia University—Iseman previously was a cast member on Clean House and hosted The Soup spin-off Sports Soup. But his admirably infinite enthusiasm predates all that.

“A lot of it is coffee,” he joked, and then got serious. “I grew up a younger brother, and my brother was tough. I knew if I’m not upbeat and positive, I’ll get my ass kicked. So, I think enthusiasm came from that.”

“I used to be a doctor, and I left to do this, so love what I do,” he continued. “It’s the best. And I don’t have to work out to do what I do—they do! Those who can, do, and those who can’t, host. I was just up eating bacon and hash browns watching the ninjas contemplate their workout later. It’s a much easier gig. Enthusiasm’s easy.”

The course for Esquire’s Team Ninja Warrior, however, was not easy—and it was also fast, both in terms of filming and running. Eight episodes were filmed in just three days.

Those races were much more visible to Matt and Akbar than runs on the usual course, because this one is curved.

Iseman told me that “this is probably the best visibility we’ve ever had. On a typical course, we usually can’t see the first or second obstacle. We can then see most of them up to the warped wall and then we’ll have monitors in front of us.” Those monitors show the obstacles they can’t see plus close-ups. When they’re looking down, “We’re watching the monitor trying to get a better sense of it, particularly on stuff where it’s hand placement—where’s their grip going? But usually we can see most of the course.”

On the regular show, “people take their time, there’s downtime, they’re pausing in-between [obstacles]. Team Ninja Warrior was the opposite. Every second someone’s on the course, it’s 10 out of 10,” Iseman told me. “We essentially told these guys: We know how good you are, let’s see how fast guys can go,” Matt said.

“It was great seeing when someone would catch up and people just throw caution to the wind—how they could skip, jump three bars in. The performances we saw were just amazing.”