After three seasons of investing in small businesses and being 100 percent in charge, The Profit star Marcus Lemonis needs help.

“I sat down with Jim, and I said, Look, Jim, I can’t continue to just make Profit episodes. They’re taxing on me emotionally, they’re taxing on me physically,” Marcus Lemonis told me yesterday afternoon, sitting on a couch in the lobby of a hotel.

Jim is Jim Ackerman, the former VH1 executive—he developed Love & Hip Hop and Tool Academy—who is now CNBC’s senior vice president of primetime alternative programming. In other words, he’s the person who’s brought reality television to CNBC, and his biggest show’s biggest star is getting burned out making television and then supporting them after cameras go away.

Help is coming in the form of a new, less-taxing series that will help Marcus find an actual employee. The spin-off series, which CNBC announced at the Television Critics Association winter press tour yesterday, is called The Partner, and like its sibling series, it is grounded firmly in reality, even if it will have contestants competing in challenges.

Marcus said “it’s a natural evolution” because he’s already hiring people to oversee aspects of his businesses—and some of them will appear on the show this season.  “I’m going to start introducing characters” on The Profit, he said; for example, an episode this season will return to Simple Greek where we’ll meet someone who works with Marcus on restaurant franchises.

“I think being honest about the fact that, man, I just can’t do it—you know what really struck me?” Marcus asked me. What happened was that people he’s partnered with on The Profit noticed that his attention was spread thin. “I started getting—not complaints, that’s not the right word. It’s sort of like, Hey, we don’t feel like we’re getting enough time with you. A couple of them even offered to [help]. But at the end of the day I need them to be focused on their business.”

Since he’s already hiring people, Marcus told Jim Ackerman, “Why don’t we just let me go through that job-hunting process? Let’s just show people what it looks like. People want to know who’s helping you.”

That was the birth of The Partner.

Marcus Lemonis’ The Partner is not The Apprentice 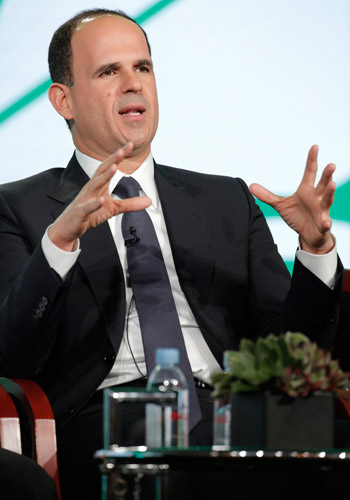 The new series will be filmed in Chicago, where Marcus lives, and will be formatted, meaning there will be a structure to each episode. That includes, yes, some challenges.

However, it’s also not going to be The Apprentice, on which Marcus appeared years ago to advertise his pre-The Profit businesses.

During the press conference earlier in the day, Marcus addressed that several times. At one point, someone asked him if “anybody who might be tempted to write a headline that says, ‘CNBC is doing its own version of The Apprentice with Marcus,’ can you just kind of tell us why that would not be a good headline?”

Marcus replied: “No, it would be an interesting headline. It would be inaccurate, but it would be interesting.” It’s inaccurate, he continued, because “I’m a big believer in treating people with respect and treating people with dignity. I want people to look at this show as an opportunity to be hired, not the opportunity to be embarrassed, and be degraded, and be fired. It’s a very big difference for me.”

Other ways Marcus Lemonis told me The Partner will be different from The Apprentice:

Regarding the comparison to NBC’s The Apprentice, Marcus told me, “I kind of welcome it, because I never thought The Apprentice was an authentic hiring process. You task people, somebody doesn’t say something right, and they’re fired. It was great entertainment. On CNBC—we have lower ratings, maybe because we don’t grandstand and have the gloss and the glamour, but I think people come there for something real.”

Details on The Partner are still being worked out

How exactly the show will work and what it’s format will look like are still being discussed. Marcus told me one potential challenge would be giving contestants an empty house to live in and $20,000 to furnish it. Watching the contestants interact and take leadership roles would provide him with insight, but so will watching how they choose to spend his money.

Each season will hire a new person, and casting will start soon. Production will be this spring, and the show will air this summer—though possibly late summer, potentially leading into a new season of The Profit.

I asked if it’s possible that he won’t want to hire anyone at the end of a season, and Marcus said that’s possible, but said, “I also envision a tougher situation where I like two of them. The stakes are big for me.”

He wants the seasons to be kept short, producing three or four shorter seasons instead of one drawn-out 20-episode season, which makes it possible to binge-watch The Partner.

Even with this new spin-off, The Profit isn’t going anywhere. After our conversation, Marcus left to go be interviewed for the episode that will air in just two weeks. That short turnaround isn’t new; he told me that they’ve done a reveal on a business on a Wednesday for an episode that airs the following Tuesday.

I asked about this season of The Profit, which seems to have more defined resolutions than previous seasons. “They’re cleaner, aren’t they?” Marcus said. I asked if that means it’s more artificial, or if they’re looking for ways to wrap-up an episode, like a reveal of a makeover. “No, I think what’s happening as the show has matured, and as we’ve gotten viewer feedback—a lot of it, because I look for it, and I ask people what they think and then they tell me—I’m more conscious of making sure that we keep things tight,” he said. “We land the plane sooner. We’ve probably been able to shave off a half a day or a day of shooting, because I’m not as all over the place as I used to be. In the beginning, I was trying, sometimes throwing darts trying to figure it out.”

Season three actually had less production than previous seasons, Marcus told me. “We cast, and we shot; we did no pre-production,” he said. “I’m wondering if that actually, oddly, kind of helped, because you don’t think so much, you just go with what it is.”

Going with what is has made CNBC’s The Profit one of the best reality shows on television today, and we’ll continue to follow the reality of his businesses and life on The Partner.