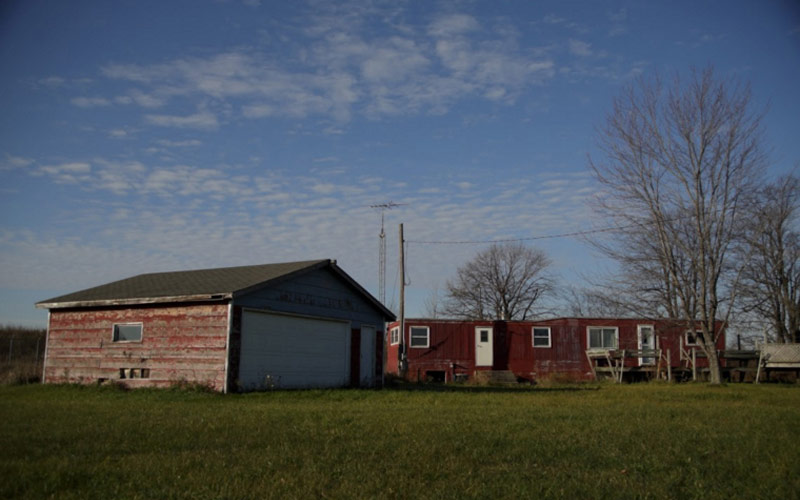 Steven Avery's trailer, where police and prosectors say he killed Teresa Halbach. The case is explored in Netflix's Making a Murderer. (Photo by Danielle Ricciardi/Netflix)

In episode seven of Netflix’s extraordinary documentary reality series Making a Murderer, one of the lawyers for accused murderer Steven Avery is driving through a snowy Wisconsin landscape. A camera operator is sitting in the passenger seat, producing footage that, as with most of the series’ visuals, looks like a well-made home movie. The lawyer makes the kind of passionate argument that he’ll make in courtrooms and in prep sessions with Avery’s other lawyer.

“It shows the imbalance between the individual and the power of the government, the full force of which they’re trying to bring to bear on this man,” Jerry Buting says. “Why? And why in this case? Because we have accused—and the evidence suspiciously points to—framing by one of them. And when you do that, you do so at your peril, as the state would say.”

Specifically, he is talking about the FBI’s unexpectedly rapid test of a blood sample using a test no one else does; he is more broadly talking about Wisconsin authorities’ persecution of his client. But he is inadvertently talking about this documentary reality series that he stars in.

Making a Murderer is not really about the murder of Teresa Halbach. It is instead about the investigation of her murder and the subsequent trial of Steven Avery. Shortly after he is released from prison, where he served 18 years for a sexual assault he did not commit, Avery sues Manitowoc County. While law enforcement is being deposed and questioned about their previous investigation, Avery is arrested, once again for a crime he insists he did not commit. That’s just the beginning.

To quote Steven Avery’s other lawyer, Dean Strang, the show is also about our justice system and its “expressions of ordinary human failing.”

A subtle yet effective arrangement of parts

Making a Murderer is like a shredder in reverse, taking fragments of information spanning decades and weaving it into whole, coherent pieces. The collective result is highly compelling horror, and this is the great achievement of the series and its directors Laura Ricciardi and Moira Demos.

This tapestry left me constantly talking to the images on screen: What? No way. How is that possible? Come on! So much of what happens is suspicious, questionable, baffling, and unbelievable—Isn’t our legal system better than this?

The two high-profile true-crime series from the past year, The Jinx and Serial, both turned their producers into subjects. Making a Murderer directors Laura Ricciardi and Moira Demos have done the opposite, and the production is barely noticeable.

What they have done best is trace a very complicated series of events. There is no narrator, which makes it even more remarkable how coherent the narrative is. The facts and clips tell the story.

Their arrangement of parts is, of course, quite deliberate. This is not a raw feed; it is carefully crafted work. Three episodes are built primarily of footage from the trial, and the directors have not only chosen which parts of the trial to show, but also piece various parts together. That juxtaposition—of testimony, press conferences, and evidence—matters. In one part, we see footage long before a judge actually does, which left me outraged at a decision the judge makes—though, of course, as he made the ruling, he didn’t have the same information viewers did.

Beyond that, Ricciardi and Demos’ craft is mostly subtle, with the notable exception of a few choices, like a Birdman-style drumbeat that calls attention to the on-screen evidence in an early episode. The bleak opening title sequence, all desolate images of Wisconsin, is reminiscent of True Detective season one’s opening. While the audio of phone conversations or interviews plays, the visuals don’t illustrate, they just serve as background; often, the camera pans across locations and landscapes, sometimes from above.

The images appear to not just come from another decade (most events occurred in the mid-2000s), but from another era. That may be in part due to the lack of high-definition footage, both in archival and original tape. It also probably has something to do with the rural setting, and the socio-economic status of the show’s primary subjects, who live in cramped, cluttered trailers.

All of this subtle craft carries a lot of power and weight. Even small moments—maybe especially small moments, such as Steven Avery’s mother in her dated kitchen, cooking and eating, alone—resonate. We see the effects of the case and trial on Avery and his family, and whether or not he is guilty, this is access that informs.

Making a Murderer’s cast of characters and/or villains

The argument Making a Murderer makes is not about guilt or innocence, though it’s easy to draw some conclusions. Rather, it’s a 10-episode series about process and procedure, about how human beings can make such terrible choices, whether intentionally or accidentally.

While the cases, plural, against Steven Avery consume a large part of the series, his teenage nephew, Brendan Dassey, also becomes a central character, and his story is even more horrifying. The story is told from their perspective, because the directors have access to their defense teams and families.

The opposition, essentially, is composed of a cast of characters who mostly appear in news footage, recordings of the trial, depositions, and interviews recorded during the investigation.

There’s Lt. James Lenk and Sgt. Andrew Colborn, who are not supposed to be involved in the investigation but remarkably still are, and in critical ways. The footage we see of them, primarily in depositions and during the trial, is not flattering; they seem sketchy at best as they try to answer questions about their sketchy behavior. Likewise, Detectives Tom Fassbender and Mark Wiegert make baffling decisions.

Then there’s Theresa’s brother, Mike Halbach, the family’s spokesperson who is, as the series presents him, an unwavering supporter of law enforcement. As a brother of a murder victim, he deserves more empathy than he’s getting from some viewers; his lack of on-screen emotion isn’t a red flag. But the series mostly holds him up as someone who blindly believes in a process that we can see is deeply flawed, so that response to him is understandable. (Mike is also involved in the questionable search party, and says something about mourning his sister long before her body is even discovered, which has raised suspicions among some viewers.)

We only have the fragments presented in Making a Murderer; that’s not enough to accuse or convict anyone on social media or in actual court, which is kind of the whole point of the series. Rushing to judgement doesn’t produce desirable results.

If there is a villain deserving of some scorn, it is the prosecutor, Ken Kratz, the ringmaster of this unbelievable circus of an investigation and trial. During his closing argument, he actually insists that “reasonable doubts are for innocent people.” That’s just one of the many Um, excuse me, what? moments in a series that’s full of them. Another is a press conference he holds to reveal alleged evidence in the most sensational way possible.

Kratz declined to be interviewed for the series, saying in one interview, without any hint of irony, “I’m being set up.” However, in another interview, Kratz does cite one particularly compelling piece of evidence that’s omitted entirely from the series, involving phone calls Steven Avery made using *67 to conceal his number.

The directors responded and make fair points about the impossibility of including everything, and choosing what they thought was the strongest evidence. (The trial takes three hours on screen but took seven weeks in real life.) Yet I don’t find that to be a satisfactory answer, because that particular piece of evidence introduces some doubt where there is very little. I wish they’d included it. And who knows what else isn’t there?

Still, the effect of watching the series is to come away thinking that there is, at the very least, reasonable doubt—and again, that’s what makes Kratz’s dismissal of that standard even more dumbfounding (or perhaps a smart strategy).

About halfway through, the shock of all the doubt wears off and the story begins to wear—kind of like it might during an actual investigation and trial, which is something I appreciated about this series. It’s not the condensed, Dateline NBC version of a crime. Real cases aren’t resolved in 44 minutes like on CSI or Law and Order.

That said, the trials themselves have moments that are Law and Order-worthy—lawyers making deft arguments and presenting evidence that seems incontrovertible. Even if you’ve Googled the outcome of the trial, it’s remarkable to watch it unfold on screen. That the events of Making a Murderer are messy, disturbing, baffling, and sometimes unknowable—it’s real life, after all.