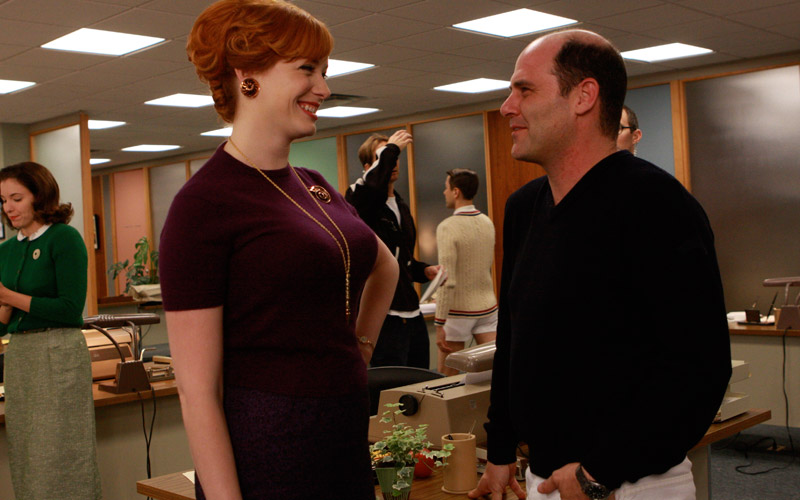 Christina Hendricks and Mad Men creator Matthew Weiner on the set of the show during season two. (Photo by Carin Baer/AMC)

Matt Weiner, the Sopranos writer turned Mad Men creator and showrunner, admits that he “would find it a tremendous challenge” to produce an unscripted show, and analyzes the scripted world’s perception of reality TV.

All of that is in part one of his appearance on The Jay and Tony Show Show podcast, which Weiner taped last Monday. The conversation about reality television starts about 37 minutes in, though the rest is interesting, too, especially for fans of AMC’s Mad Men.

Asked by Jay Blumenfield how Hollywood’s scripted television community doesn’t respect reality television, Weiner starts by saying, “I don’t hear anybody in the scripted world talk down,” adding, “I think that’s your imagination.”

Weiner expands his argument, however, pointing out that the existential threat reality TV presented starting 15 years ago may have contributed to the ill-will—but that same sort of animosity is common in all genres. And then he goes on to discuss why there may actually be some resentment from the scripted world.

“When it became successful, everyone’s like, oh my god, this is a threat, this could take away our livelihood. The’re going to spend more hours doing this stuff. Now the fact that they say it’s shit: When I worked in comedy, they said all the dramas were shit.

…Whatever is the new hot thing and you’re not in it, you’re going to hate it and be threatened by it. That’s number one. Number two is: there’s a feeling that a lot of it is shit, because it appeals to a very sort of primitive entertainment system of people embarrassing themselves or rewarding bad behavior.

On the one hand, COPS has this documentary feeling to it, and it’s criminals, and it has a newsy, slightly substantial thing to it, even though it’s trashy. And then there are shows that are deliberately trashy. It’s the same thing: My parents probably feel the same way about The Bachelor as they do about The Beverly Hillbillies. Do you know what I mean? There’s always a feeling of, okay, there’s shit in there.

I think, in the industry, there’s some issues about the unionization issues, and how few people are paid to do it, and how practices in your business are being brought to the scripted world of, like, Hey, we’re not paying anybody. Do the pilot on your dime. Sit in the bake-off. All these  more respectuful, gentile behavior of the scripted world that took people like Normal Lear and Dick Wolf to whip the networks to a relationship, were completely being eroded by the scrappy, upstart reality TV world that was willing to do something for nothing. That’s my analysis.”

Later, when Tony Marsh pushes him on how “people crap on reality,” Matt says,

“I don’t agree with you Tony. Survivor? Amazing Race? You don’t think these things have a snooty appeal to them? You’re out of your mind. Those are not guilty pleasures, those are religious things. I think you’ve got a fucking chip on your shoulder. I think this is all self-hatred.

… Richard Hatch, do you remember that fucking guy? That’s not lowbrow. That was above sports.”