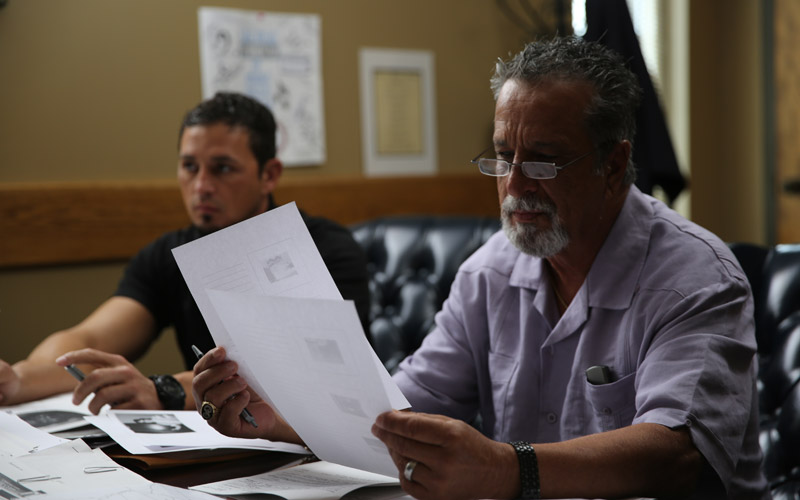 It was in a diner in New York City’s West Village that the Discovery Channel’s first true-crime, real-time reality series Killing Fields took form. Actually, it was multiple diners, and the people sitting across the table from each other were an Emmy-winning writer of Homicide: Life on the Street and an executive producer of Bravo’s The Real Housewives of New Jersey.

“Tom and I sat in so many diners in the West Village talking about this show,” Lucilla D’Agostino told me. She’s talking about Tom Fontana, who also created 1997’s Oz and personally “kicked the door open” for the last 15+ years of prestige drama, as critic Alan Sepinwall writes in his terrific new book.

The Discovery Channel series is itself kicking a door open at Discovery, for a narrative, true-crime series—never mind one that focuses more on character and place than plot, and also stays true to reality.

The idea for a series D’Agostino discussed with Fontana originated in her company’s non-Bravo series. D’Agostino is the executive vice president of programming and development at Sirens Media, which, in addition to producing RHONJ, has produced “a lot of crime shows,” she told me. “Along the way, when we’re working on different shows, you hear about different cases. One of the things that became apparent to us is that there are these things called killng fields, these dump sites, so we thought to ourselves it would be really cool to do a show about these dump sites.”

That led producers to Louisiana, where law enforcement at the Iberville Parish Sheriff’s office “talked to us about this one case—the Eugenie case—and there’s this retired detective who still comes in once a week to ask if anybody knows anything, and he won’t let it go. That sounded super-interesting. The show that you’re watching now because everyone down there really was still working on this case in the back of their mind, and Rodie really hadn’t let it go, and they happened to mention it to us.”

“We just realized we’d stumbled onto a really special case and an incredibly talented and dedicated group of officers like we’d never met before,” D’Agostino said. They pitched the show to Discovery, which, under the leadership of its new president, was looking for Discovery to again have shows about crime and forensic science.

While the series is about a murder investigation, a re-opened cold case, the first two episodes have been largely focused on atmosphere. It feels more like True Detective than the type of reality series Discovery has aired in recent years, and is significantly more subdued than the network’s most prestigious series, Deadliest Catch.

That was something Fontana pushed for. “When I first wanted to do the show, I actually sat down initially just with Tom to go over the idea. He walked me through some of his ideas about look” and other attributes of Killing Fields’ aesthetic.

Fontana and his long-time television production collaborator, Barry Levinson, the Oscar-winning director of Rain Man, joined the production, and while Sirens is running the production in Louisiana, both have remained involved. “Barry was very particular about music and remains particular about music—he’s really gifted and astute when it comes to that sort of thing,” D’Agostino told me. “Tom always says that you can’t write characters this good. So a lot of times we talk about how to let things breathe and how to really let the character moments shine. And they’ve been an amazing, supportive team when it comes to making the show feel very different than anything you’ve seen on Discovery or in this genre.”

Levinson has produced television before, notably co-produing Oz and Homicide: Life on the Street with Fontana, but this is his first nonfiction television. “I’ve always liked documentaries, and I’ve been fascinated by them over the years,” he told me. “What’s nice now in terms of this and other shows, is that television has been more adventurous in ways that theatrical hasn’t.”

Levinson pointed out that “the technology evolving … makes it easier. It’s more mobile, you don’t need as much light, you don’t have to set things up. The technology helped change the way it could be done—couldn’t do it this way 20 years ago.”

Levinson and Fontana have “become additional eyes on the project,” Levinson said, “saying whatever the hell it may be—or nothing, in a particular case, because it’s great the way it is.”

Citing the episode-one conversation that takes place next to a burning sugar cane field—watch that full episode below—he told me it had “almost a theatrical aspect to it.”

There’s a reason the burning sugar cane field scene feels like it came from a film: it was one of the show’s scenes that was arranged by producers, D’Agostino told me. The idea, though, came from the show’s two primary cast members.

She said that the most cinematic and rich scenes are the ones the producers can control, such as establishing shots, B-roll footage, or occasional moments like a conversation next to a field that’s on fire. “That is definitely an example of something we can control,” she told me. “The scenes that are really beautiful are the scenes that we can control. They’re conversations that aren’t happening in the frenzy of jumping into a car and going to find a perp. Those scenes we can spend more time and be more artful about them.”

Sirens has a crew that varies between 15 to 25 people in Louisiana, though they don’t film 24/7, in part because the detectives aren’t working on the case every moment. “There was just a bomb threat yesterday,” D’Agostino said, “and that’s keeping our detectives very busy on something that’s not the case. So we sit around and we wait.”

That downtime, however, is the exception in the production of Killing Fields, though. Both filming and post-production can be quite frenetic.

“The scenes when they have to go-go-go, because they are pursing a lead and pursuing it in real time, there’s no stopping down and asking them to do anything,” Lucilla D’Agostino said. “It’s messy, it looks messy, because it’s messy. There is a balance between everything being pretty slick at times and then the camera is all over the place, just trying to chase Aubrey out the door. Usually he runs out the door before we can keep up with him.”

Rodie Sanchez, the 61-year-old retired detective who came in to weekly to check on this cold case, confirmed that the production does stay out of the detectives’ way. “These people with Sirens and Discovery, working this whole case with them, they followed us. Not in our way,” he told TV critics earlier this month at the TCA winter press tour. “They actually move out of the way, and they did everything we asked. But I actually seen a couple of them on occasions—cameramen had tears in their eyes because they felt that they were there a part of this. And that really—I didn’t just work with cameramen and people there I never knew before. I worked with a bunch of great friends, and that’s how I look at them now today. And I can’t wait to get back to them, either. “

Although production began last August, when I talked to D’Agostino last week, she said they were still working on the episode that airs tonight. She and her team, who can stay in the office until 4 a.m., expected to finish it Thursday, five days before air—incredibly rare for a cable reality series. “We’re basically crashing to air—it’s like the equivalent of making network news,” she said.

“Nothing really happens on the type of clock that you’re used to in a production, because you just don’t have that type of control. We wait, and when something amazing happens, we shoot it, and then we get it back here as soon as possible,” she said. “We have lots to do before the end of the series. It’s going to be a rush to air every single week.”

Tonight’s episode, which airs at 10 p.m. ET, is the third of just six planned episodes, so the show will be halfway through the season. Unlike HBO’s The Jinx and Netflix’s Making a Murderer, the producers haven’t had years to shape the story and develop a narrative arc.

So what happens if they get to episode six and haven’t solved the crime? Will there be a satisfying conclusion for the audience?

“We know where the detectives are going with the case, and I think of it this way: They have multiple leads that they’re following at any given time, so I’m not worried about the arc, because I have that,” D’Agostino said. “I know they’re actively pursuing three different things at once, which is very exciting.”

And while the detectives are committed to solving the summer 1997 murder of Eugenie Boisfontaine, Killing Fields is about more.

“You’re really along for the ride with Rodie and Aubrey,” D’Agostino said. “If they don’t solve the case within my production window, they’re not going to to stop trying to solve this case. Rodie won’t give up until the day he dies, and now Aubrey feels indebited, not only to Eugenie, but to Rodie. Regardless of whether or not we solve the case, finding out who killed her is going to be something they’re going to do when cameras aren’t even around.”

“If people are excited and along for the journey of Aubrey and Rodie, then [viewers] will be really fulfilled when you see that they’re never giving up,” she told me. “I don’t know if that’s going to happen yet—there could be something more substantial.”

The case is still developing: When the detectives and Levinson appeared at TCA on Jan. 7, two days after the show’s premiere, Aubrey St. Angelo received a tip that morning and was eager to return to Louisiana to continue the investigation.

The series will follow St. Angelo and Sanchez wherever they, and the case, may take them.

“I’m going to shoot up until the last minute I can before the last episode airs,” D’Agostino said. “There’s so many new developments coming up and things that are happening right now in the field. I know how excited we all are here.”