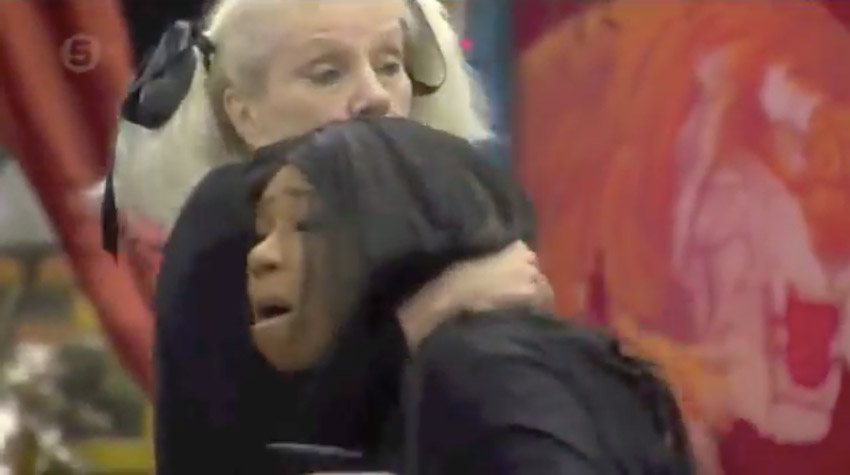 Celebrity Big Brother had the most extreme and rapid overreaction and miscommunication in the history of the entire franchise last night, when Tiffany Pollard, aka New York, misunderstood David Bowie’s ex-wife Angie Bowie.

Angie was told of David Bowie’s death, and was told off-camera; she decided to stay on the show. She also decided to tell Tiffany, but said simply, “David died.”

Also in the CBB house this season is  David Gest, Liza Minnelli’s ex-husband, who, of course, Tiffany thought Angie was talking about.

The ensuing overreaction starts as heartbreaking and quickly changes to hilarious, especially when New York immediately freaks out and tells everyone else, breaking her promise, and then gets furious when she realizes David Gest is there, alive.

That led to perhaps the most incredible exchange I’ve ever seen on Big Brother:

Angie: What did I do?

Danniella: You told her that David was dead with cancer.

Angie: Yes he is.

Danniella: He’s in there asleep.

When she finally learns the truth, Tiffany/New York says Angie “said David Gest,” which isn’t true, nor is it true that Tiffany verified that it was David Gest, as she claims. This has led some to speculate Tiffany was acting the whole time, but it just seems more like damage control to me; her initial reaction does not seem phony in any way, and she is not that good of an actor.

Just watch this clip, via PopCultureDiedin2009: