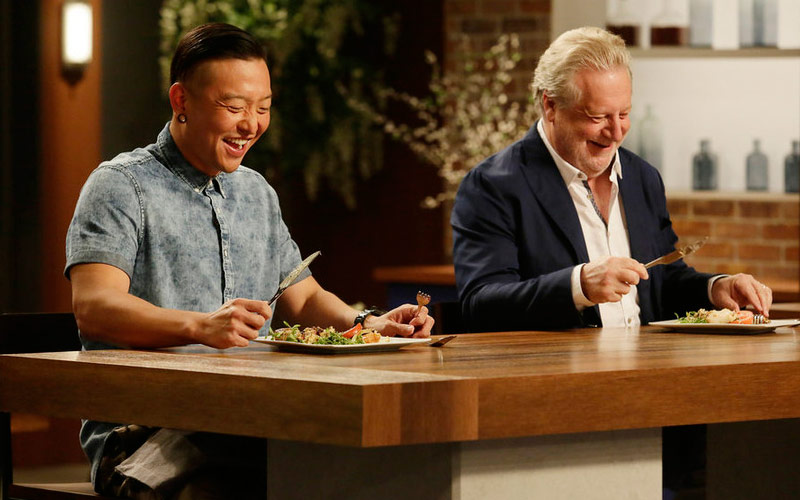 Oh no, I thought. Bravo is ripping off Cutthroat Kitchen, really? That, I admit, was my first reaction to the announcement of Bravo’s Recipe for Deception, which debuts tonight at 10 p.m. I love cooking competitions, but I was not eager to see another dumbed-down show that screws with people instead of just letting them cook. And Bravo advertising the show with “from the producers of Cutthroat Kitchen” just seemed to confirm that this was exactly their goal: targeting Food Network viewers.

Recipe for Deception is not, however, dumbed-down. If anything, it’s the opposite: trying so hard to be smart that it ends up just being confusing, at least at first. There are so many rules!

But I’m glad I stuck with it for two episodes: the game’s structure quickly becomes clear, and by the time Lorena Garcia showed up—in the celebrity chefs episode that airs next week—the show won me over.

The basic premise is simple: Two chefs have 30 minutes to create a dish that showcases one ingredient that has been chosen for them by the producers. They don’t, however, know what that ingredient is until just five minutes are left. Each chef knows what their opponent’s secret ingredient is, though, and they each ask questions of the other to try to figure out their own ingredient. Here’s where it gets (even more) complicated: they’re sometimes allowed to lie, in the style of the two-truths-and-a-lie game.

There are two rounds of this, and then a third round, during which the eliminated chefs come back. They get to ask a question of the host, in order to try to figure out the winning chefs’ ingredients. Armed with that information, they  try to convince the chef that beat them to give let them back in the competition and give them a share of the prize in exchange for what they think they know (which may be wrong!).

I told you there were a lot of rules.

The host, Max Silvestri, is impressive: He delivers this information lightning-fast but comprehensibly. This is not a show that dawdles; it’s like The Amazing Race of cooking competitions, and makes Chopped seem slow by comparison.

The biggest issue I had was the lying, which at first just seemed pointless. How’s a chef supposed to figure out which thing another chef is lying about? Why not just give actual, truthful clues? Why can’t we learn from the lessons of The Great British Bake-Off instead of copying Food Network’s increasingly desperate ratings grabs?

What finally won me over to the show’s structure was next week’s episode. By using the one clue she’s given and asking the right questions in the right order, Lorena Garcia brilliantly narrows the possibility of ingredients until she figures it out precisely. (Other contestants may not play the game as smartly, alas, and her episode is definitely superior to the first episode, the one that airs tonight.)

That moment illustrates how this game really tests chefs on two levels: One, on their cooking and ability to showcase an ingredient, and two, on their knowledge of food.

Even the judges are tested, as they don’t know the secret ingredient—at least at first. They’re eventually told, because, as Jonathan Waxman told me, “You had to weigh the usage of secret ingredient and the quality of the dish. They had equal weight. So if somebody cooked a fantastic dish, but their secret ingredient was kind of eh, then that changed the playing field.”

Sometimes the judges actually seem to flip their perception of a dish because of that. They love it, and then realize it can’t win because the secret ingredient is extraneous or hidden. “It’s like looking at the menu, and you see the name of a dish, and someone presents you the dish, and it doesn’t sound like the menu—it lacks something. It’s the same issue,” Waxman said.

And Chris Oh pointed out that “food is so subjective. I could love the dish, and Jonathan could absolutely hate it. I just love that kind of dichotomy, figuring out why I liked it or why he didn’t like it.”

That’s one of the things I like about reality TV shows, too, especially ones like Recipe for Deception, which didn’t look all that appetizing at first, but once tasted, surprised me.