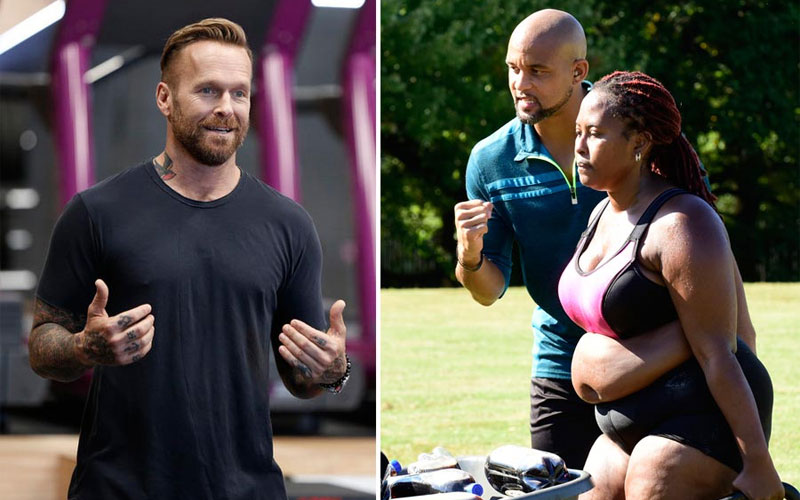 The new year brought with it cold air, resolutions, and weight loss reality shows. Yes, they’re back, though they never really went away, like diets and hope.

Each of the three shows I’ve reviewed here—one old, two brand-new—illustrate the challenges of losing weight, mostly in the form of working out. Emotions are packaged neatly into quick soundbites that land at just the right moment of struggle, and everything is smothered in a unifying conceit.

The contestants’ progress, which is rapid—in real life, sure, but definitely on screen—is impressive. In 60 or 90 minutes, pounds drop away, and each show has a clear message: You, person sitting on the couch, can do this, too! Why not try, perhaps with these products we have to sell you?

I may not be the biggest fan of any of these shows (and that’s as much of an understatement as a chocolate-covered Oreo is understated), but I was certainly drawn in at moments. They know how to tug at our desires to be better, to do better by ourselves.

If only these shows were better.

Of the three shows, NBC’s The Biggest Loser: Temptation Nation (Mondays at 9) looks the best, with the slickest production. But it is also the worst because of how full of crap it is.

Yes, technically, this rebooted version of the long-running series is strong, a well-produced show with striking lighting, great set design, and editing that knows how to sell a moment. And there are very real moments: touching stories of unimaginable loss, the breaking points during tough workouts, the game play, the shiny logos of sponsors.

Shifting Bob Harper from trainer to host has only managed to amplify his voice and his ego. “I am raising the money!” he screamed during the first challenge, throwing his arms into the air, and all that was missing was the lightning and thunder.

When someone climbed down off a treadmill and collapsed in the arms of a medic, Bob’s focus was on the game: “Did you press that button?” In a later challenge, another contestant climbed up the side of a building, and when Bob explained the next part of the game, she asked, “Is there water?” Bob told her, and this is real, “Not ’til we make our decision.” (If only the producers could withhold oxygen, too, just imagine the moments they’d get from that!)

There’s very little Bob doesn’t shout at the contestants, as if that will make what he’s saying seem significant instead of just a well-produced moment conceived by smart producers.

This is the essential problem with The Biggest Loser, the way it pretends it’s about health but is really about the production: the forced drama, the product placement, the emotion.

It’s absolutely effective, for sure. The pain is real, from the physical to the unimaginable guilt that a mother feels about the drowning death of her son. Setting aside how making weight loss into a game encourages people do damage to their physical and emotional well-being, the competition can present interesting choices, some of which are not bad metaphors for real life. But this is not real life, this is The Biggest Loser.

The logo is different and Bob is there, but really, nothing has changed with The Biggest Loser. It is what it always has been, and now it’s just the tiny part of the iceberg sticking above the surface, puncturing a hole in our rationality so we can sink into the icy waters where the empire of Biggest Loser products awaits, promising rescue and salvation.

My Diet is Better Than Yours is not a better show

There’s something very interesting at the core of ABC’s My Diet is Better Than Yours (Thursdays at 9), a show on which each overweight contestant is paired with a trainer who has a different weight-loss plan.

Our obsession with dieting has produced so many options, with a new fad diet grabbing attention every few minutes. So, testing different plans against one another is interesting, as is the show’s best addition to the weight loss format: allowing contestants to dump their trainers and choose another plan. (There is a caveat, which is that each person can switch only once and only one person can switch each episode, which seem more like practical decisions, so the show doesn’t have change-ups every week.)

Alas, beyond the idea, My Diet is Better Than Yours simply comes off as The Biggest Loser done cheap, with only a $50,000 prize and a gym/weigh-in room looks like someone tried to recreate The Biggest Loser set in an abandoned building. The scale is just sad, and attempting to copy The Biggest Loser’s weight-display screen has resulted in a display that cycles through fake weights digit by digit, which ends up including numbers that start with 8 and 9, as if the person somehow gained 700 pounds.

Shaun T’s hosting is stiff and very Allison Sweeney-esque in its tediousness, and the at-home training, while more realistic than BL, adds to the low-rent feel.

But the real problem seems to lie in casting. The trainers are quite irritating, and during the episodes I watched, I just wanted them to go away. The non-challenge segments feel overly coached, and perhaps the annoyingness from the trainers comes from that. Still, some of their advice is just absurd, and there’s nothing in the show’s presentation of them or their methods that makes me trust them as experts.

If the show goes to a second season, it’d be interesting to do this with higher-profile weight-loss methods, maybe in teams of people committed to their plan competing against each other. Weight Watchers versus Jenny Craig. Atkins versus vegans. The South Beach Diet versus the Paleo Diet versus Whole 30.

Fit to Fat to Fit is an exercise in pointlessness

On A&E’s Fit to Fat to Fit (Tuesdays at 10), a trainer gains weight pounds over four months, and then helps an overweight client while losing the weight he or she just gained.

In the first episode, when Ray learns that his trainer JJ is going to gain weight, he pauses for a moment and then says, “I don’t recommend that. In one aspect, it breaks my heart that you’re doing that to yourself. I think it’s amazing you’re willing to but—” Ray starts crying. “Part of me’s just sad for you, because I know what it’s like, and it sucks, and I don’t want anyone else to go there.”

He later says, “You’re nuts.” It’s hard to disagree. Having the trainer become unhealthy literally makes no sense, and worse, the show does exactly nothing with it.

The show comes from Renegade83, the producers of Naked and Afraid, and the production is well-done. The flaw is in the concept. At least on Naked and Afraid, the nudity is both sensational and purposeful, adding an additional layer of challenge for survivalists who want to test their skills in extreme conditions.

While the trainer gains weight, Fit to Fat to Fit ignores the overweight person. After all, who wants to see a fat person when you can see a hot, buff guy eat fast food?

And none of what the trainer goes through is surprising. Fast food tastes good! Shocking! When Morgan Spurlock did this for the documentary Super Size Me, he at least had purpose—testing a claim McDonald’s made—and didn’t set out to just gain weight to lose it again.

Once the trainer is overweight—yeah, nothing is done with that. It’s rarely mentioned, and it certainly doesn’t seem to accomplish anything to help either the trainer or the overweight person. Sure, once the show gets around to showing the client losing weight, there are the requisite feel-good moments: pushing hard, breaking down, and showing off their new body to friends and family.

Watching a trainer work with and connect with a client is actually interesting. But weight loss alone apparently wouldn’t make for a good show, because who wants to see a normal person do normal things?

I look forward to spin-offs, such as Not on Fire to on Fire to Not on Fire, where firefighters set fire to their houses. That’d make more sense than this does.