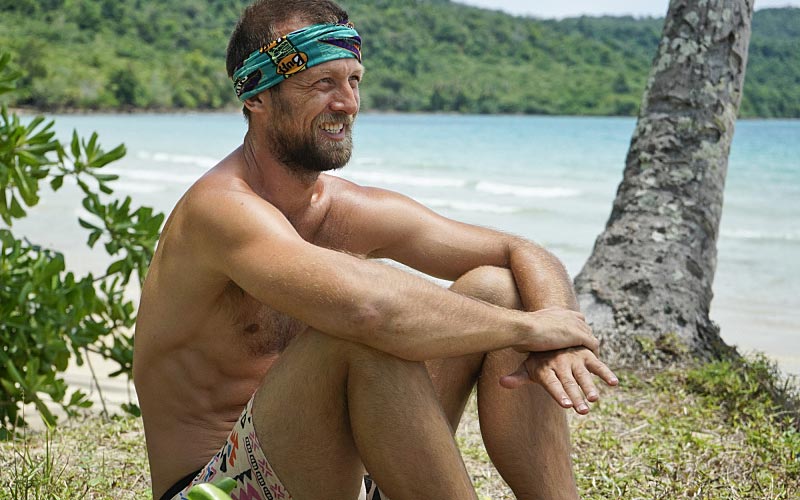 Vytas Baskauskas during the premiere of Survivor Cambodia: Second Chance. He will not attend the live reunion and finale because he broke the show's contract. (Photo by Timothy Kuratek/CBS)

Vytas Baskauskas won’t be present at the Survivor Cambodia: Second Chance finale and reunion because he broke the show’s contract by leaving the show’s location early to be with his son.

“great season through and through. Bummed I’m not invited to participate in the finale with all my castmates!”

“Went home early to see my 1 year old son. Now I’m banned from the finale. Can’t even sit in the audience!”

The Survivor contract says (page 5, #4 and #6), that contestants “may be required by Producer in its sole discretion to remain at a location separate from the ongoing production of the series.” That’s known as the Series Location Annex which “may be made up of one ore more different locations” including “in a different city, country, or continent than the location of the production,” and is “without any communication with the outside world.” It also says (#6) that contestants “will not be allowed to travel or leave the Location or the Series Location Annex, as applicable, until the end of production … except with the explicit permission of Producer.”

Vytas was the first person voted out, and thus had 36+ days to wait before returning home while the rest of the game played out. While some suggested this was because Vytas was active on social media before filming of the season even ended, he denied that, calling social media activity, such as a like on Instagram, “an accident by my assistant who responds to messages.”

However, Vytas did take responsibility for his departure from the location and violation of the contract he signed:

“It was my fault for leaving early. Just wanted to be with my son. Was hoping they’d reconsider.”

The contract appears to be randomly enforced: Last season’s cast was active on social media throughout the season, and of course, there was this incident.

Cast members are paid $10,000 for attending the live finale and reunion.