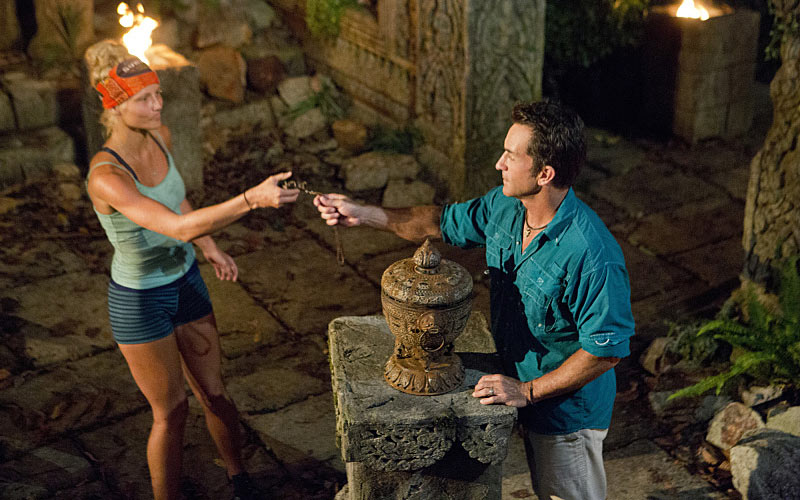 During tonight’s finale of Survivor Cambodia: Second Chance, CBS promises “a shocking tribal council delivers a Survivor first.” In the preview that followed last week’s episode, Jeff Probst stands over an open voting urn, with no votes visible, and says, “for the first time in 31 seasons…”

While we don’t know what happens, two plausible possibilities involve  1) the two remaining hidden immunity idols in play, and/or 2) a tie vote, possibly during the final vote.

If both Kelley Wentworth and Jeremy Collins play their idols, everyone else (Spencer Bledsoe, Tasha Fox, Kimmi Kappenberg, and Keith Nale) votes for one of them, it could potentially result in no votes being recorded. That has never before happened on Survivor, nor has there been a tie during the final vote for the winner and sole survivor. Of course, something else may happen!

Here’s what we do know about tie votes and hidden immunity idols from both the official Survivor rules and host/executive producer Jeff Probst.

The Survivor rules give more than one full page to dealing with tiebreakers (page 6, number 10, letter vi), but what happens in the event of a tie at the final Tribal Council remains a mystery.

The rules specify three possibilities for a normal tie:

These rules specify that there will not be rock-picking in the event of a tie at the final Tribal Council, which makes sense, because that’d leave the winner of $1 million up to random chance. So what happens then?

The rulebook (page 8) says, “In the event of a deadlocked tie in final Tribal Council, the tie shall be resolved in a manner solely to be determined by Producer.”

Jeff Probst has a secret plan to deal with a final Tribal Council tie vote, which he said is “not even a big deal, but until we use it, we don’t want to give it away.”

One of the two finalists in a season with an even-numbered jury said that there was a mysterious white envelope that held the tie-breaker, but it was not clear what that was.

In the event of a tie vote that comes from a final three, Probst said that there would be a revote, with the finalist who has the lowest number of votes excluded from a revote.

Hidden immunity idols first appeared 10 years ago, during season 11, which aired in the fall of 2005. However, their role in the game has shifted over time.

Idols must be played at or before the Tribal Council with five players left.

What happens if two idols are played? Of course, all votes cast for each player holding an idol would be negated. If a third player received one ore more votes, that person would go home. However, if only the two idol-holders received votes, and those votes were cancelled, that would mean zero votes were recorded.

There is a simple solution, however, and Jeff Probst actually addressed this possibility in a video Q&A three years ago. Talking about those who’d played idols, he said:

“They would be immune and we would revote, and you would have to vote for somebody else.”

So, if Jeremy and Kelley both play their hidden immunity idols at Tribal Council during Survivor Cambodia: Second Chance’s finale, they would be immune and the tribe would have to vote for other players.