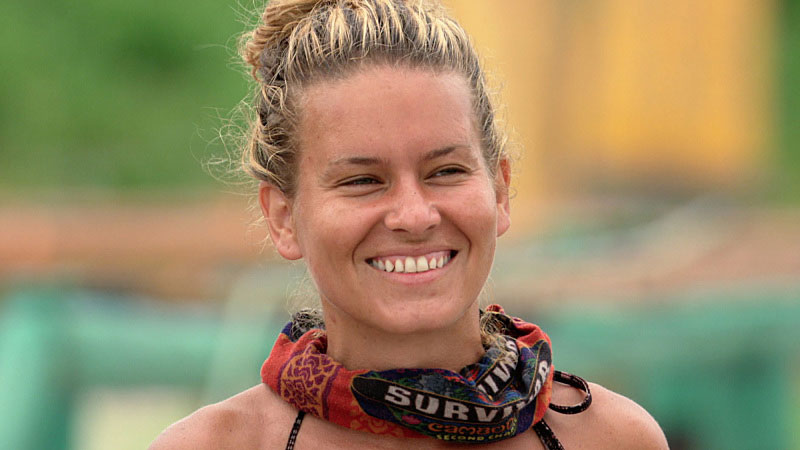 In an unprecedented, unexpectedly brilliant strategic move, which is clearly the best move made all season, Abi-Maria Gomes shifted Survivor Cambodia: Second Chance‘s game in her favor. She used her status as a swing vote to take control of the game and get voted out.

Abi now has the most power of anyone this season, having transferred herself to the jury, where, she told us, “I will be deciding who wins a million dollars.” That one-person-decides twist hasn’t yet been explained to viewers. But even if Survivor decides to be super-unfair to Abi and revert to the old way of letting every jury member get a vote, she’ll surely use her diplomacy and non-confrontational, judicious language to persuade others during the final Tribal Council.

Abi started this episode in a similarly strong position, a swing vote who was beloved by all members of the tribe, even if they are “crazy people,” as she described them.

The erratic game that her peers were playing involved two alliances of three, formed and/or reinforced by the reward challenge, which Abi lost in order to gain a strategic hand. She handed the victory to Keith, though subtly, remaining so far out of contention that the editing didn’t really include her progress. (Jeff Probst noted that Keith had previously won this same challenge. Although Keith had a second chance so he could change what he did the first time, he failed by just winning it again. There goes Probst’s narrative.)

Abi stepped aside and allowed Keith to choose Kelley Wentworth and Spencer to go to on a reward to Siem Reap with him. First, though, we almost had a Jeff Probst Pops Open an Umbrella and Calls Medical moment, because Keith was rambling like a crazy person who couldn’t remember Tasha’s name, even though he’d just voted for her at Tribal Council the night before. He explained his logic of choosing Kelley and Spencer by saying “no real logic—I’m still flashing back to when we got to go.”

Tasha asked, “Is he really that slow?” But clearly this was part of Abi’s strategy, as she used her iconic Abi Post-Challenge Pick Me or Face My Wrath stare to confuse Keith into selecting other people. That allowed Abi to go back to camp and rest.

Keith and Kelley were not included in that plan, because they wanted to keep Abi around to use to their advantage, and she really showed them by being voted out.

Abi’s plan to seize control of Survivor comes into play

The bond that led Abi to get Kimmi’s help/vote started at the immunity challenge, where they held hands and watched in horror as the emergency water safety team had to rescue Tasha, who was having trouble staying afloat and was taking in water. Jeff Probst heroically called for medical and then got in a boat and motored down the 328-foot-long course to where Tasha had already been rescued and was, thankfully, okay.

Sarcasm break! For all challenges, there is a lot going on right next to the challenge course: cameras, cranes, producers, medical, and other teams standing right there. Because aerial shots of the challenge from the helicopter are actually showing us stand-ins and are filmed after the challenge has been run, all of that apparatus has been removed. For water challenges, the crew builds platforms in the water for equipment and also has boats. So, there were camera operators and safety personnel right next to Tasha, even though the helicopter shots made it look like she was all by herself. I also highly doubt it took Probst’s call for medical to trigger that action. Back to sarcasm!

Spencer won immunity, despite scissoring against the side of a boat, and later hitting his chin on a platform. He finished the puzzle in 15 seconds, and Jeff Probst said, “nobody has ever done it that fest, ever,” even in challenge rehearsals. Of course, that’s because Abi didn’t actually attempt the puzzle.

In a touching moment, Jeff Probst explained that the second chance story—and oh, do we love the artificial stories wedged in to episodes between actually interesting stories—involved the poor puzzle, which had been rejected by that awful season 30 cast in their first challenge. As if Survivor Worlds Apart’s cast wasn’t bad enough with the misogyny and verbal abuse, they also rejected a puzzle. What did it ever do to them?

Let’s note that it took until episode 13 for the editors to show Abi as the season’s true mastermind, the person in control of the game. (Sarcasm break again, sorry: Shit, this is actually kind of true, as she often positioned herself as the swing vote.)

As Abi said in an interview, causing millions of Survivor fans to do a double-spittake because we finally heard the truth: “I’m just thinking about who to bring to the end with me.”

Of course, she surprised us all with her never-before-seen strategic move of going to the jury, but I’m sure she has things planned that we just can’t foresee. She was clearly making decisions right up until the end, when she said, “makes me wonder which we I should go with.” The “we” she speaks of, by the way, is perhaps the most convolutedly, comic way of talking about alliances or voting blocs ever. Watch it below because typing it doesn’t quite do it justice.

It’s not yet clear who Abi will be bringing to the jury with her, or what historic, never-before moment we’ll see on next week’s finale, but I’m sure it involves something Abi does.