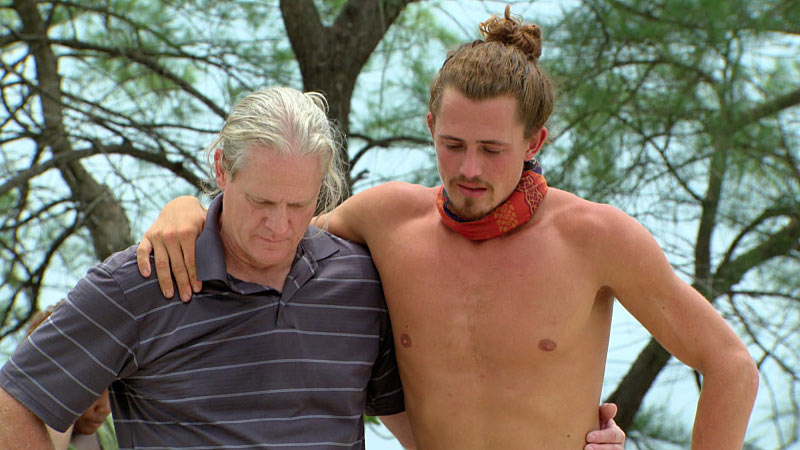 Survivor Cambodia's Joe Anglim (right) and his father before the reward challenge. (Screen grab by CBS)

This episode of Survivor Cambodia: Second Chance, “Tiny Little Shanks to the Heart,” was nowhere near as strategically surprising as last week’s pair of perfect episodes. But it was just as intense, drawing most of its power from two very emotional scenes—though they were emotional for quite different reasons.

There was strategy: Spencer reconnected with Jeremy and Tasha, who felt left out after Stephen Fishbach’s blindside. Kimmi proposed an female alliance to Tasha, who then spilled to Jeremy and Spencer to keep their trust. Nothing quite emerged from that, because the tribe ended up uniting in its vote.

The end result is that Joe—incredible, almost unbeatable Joe—was voted out by the everyone, save Keith, who apparently thought he was on a different episode and voted for Tasha. (Actually, Keith has been one of the big surprises of this season, as he’s often been the competitor who’s given Joe—and others—the biggest competition.)

Of course, Abi is the one who had to be a jerk about the vote, making fun of his hair as she voted and creating the most inexplicable metaphor for him. She referred to him as “a mold” that “is affecting other players,” who she urged to “get rid of the bad apple.” Look, Joe might be a threat, but a mold? I think Abi must have located a mirror somewhere and confused herself for Joe.

The excitement of Joe’s loss turns into an emotional low

The immunity challenge lasted for almost 90 minutes, with Joe and Keith both holding 16-foot-poles while balancing a wooden statue on top. Since nothing happened during the reward challenge and we knew a medical emergency was coming, I was too worried to pay attention to all the possible “pole” jokes.

With Probst warning the players to “be mindful of that when it drops; get out of the way,” it seemed like someone was going to get hit and need the medical attention teased in the preview.

Instead, Joe just crumpled to the ground. His legs went numb, he said later, and he passed out, perhaps from low blood sugar.

While we’ve seen too many of these moments in previous seasons, there was something about the way that happened—and the response—that made it far more scary. Joe lying there; Jeff Probst holding an umbrella overhead; camera operators racing around and catching each other in the shot; the other players cheering his loss and then realizing what happened and racing in, then clearing the way for the medical team.

I can’t quite remember another moment when Survivor has included shots of camera operators or producers rushing around, and that really contributed to the sense that something was wrong.

Thankfully, Joe was okay, though he still appeared weak later that day. And of course, his collapse wasn’t really a sign of vulnerability, but of how far he would push himself to win. That made him a threat worthy of uniting as an entire tribe to vote him out of the game.

When he regained consciousness, he said, “I just want it so bad. I love this game, man. And I want to play it as hard as I can.” And that may have triggered more tears than the family visits.

Family visits with even more emotion than usual

The family visits, which we knew were coming thanks to the preview, began with Probst pretending they were not happening. “Most of the time we do bring your loved ones to you. Not always,” he said. “Sometimes we do something different. Today we are not doing anything different.” The double-negative was so confusing that they didn’t seem to know what was going on for a half-second.

But that was quickly forgotten with each introducing, from Jeremy’s reunion with Val, who told him the sex of their new baby, to Probst declaring, “Spencer has a girlfriend.”

There were two similar reunions between Joe and Kimmi and their fathers, though one had less mouth kissing; each had dreamed of seeing their dad show up for a family visit on Survivor. “You made my dream come true,” Joe told his dad, while Kimmi said of her father, “This is the best gift I could give my dad, to let him be part of my dream.”

Neither of them had a chance in the challenge, which mostly came down to spelling a word—nourishment—that none of them could figure out even after Kelley Wentworth had spelled half of it, though it appeared Abi had it but just spelled it backwards.

Abi’s mom was there, cheering her on in the most Abi way possible: shouting orders at her, such as “Focus!” and “Don’t look at others! Get the job done!”

Kelley’s win meant she had to select four people to also bring their loved ones back to camp, meaning she basically just chose to exclude Tasha, Spencer, and Jeremy (no alliances this season: please!). That said, I have no idea why she picked Abi second. Why? To stave off the whining?

Back at camp, there was even more emotion, especially from Joe and his dad. Joe explained that his father “wasn’t very affectionate” during his childhood, but that’s definitely, absolutely, certainly not the case any more. After looking at the tribe flag Joe hand-painted, his dad said, “I’ve never had a friend like you” and “that’s why I’ve been a loner my whole life.” He added, “You’re such a good son joe. You’re my hero.”

Joe certainly was a kind of hero this season: a superhero who seemed unbeatable in challenges and in the game. He took his body farther than most people could until it gave out.

After Joe recovered from his fall at the immunity challenge, Jeff Probst told the tribe, “This is what we hoped for. A group of people willing to push themselves further than they would ever push themselves back home in their normal lives.” A little too soon, probably, to make a point about how awesome it is that someone just collapsed, but yes.

Joe and this group have pushed themselves in a way that has brought me back to the excitement and unpredictability that Survivor has been capable of delivering these past 15 years.