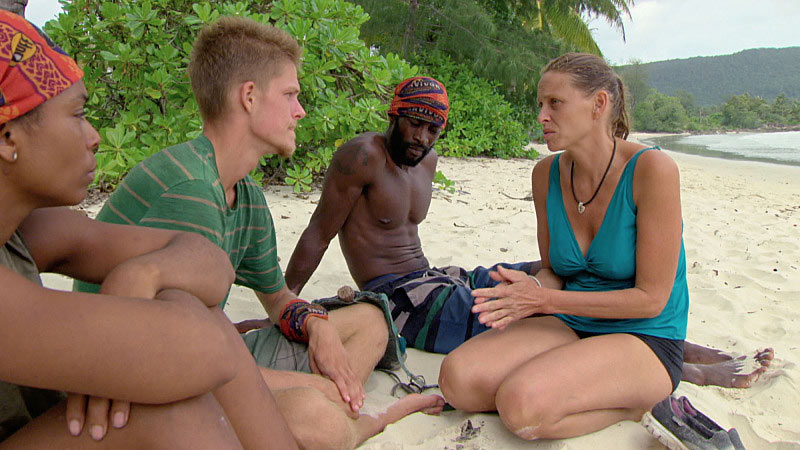 Survivor‘s continuous ratings dominance in its Wednesday timeslot, including its destruction of American Idol, makes all the argument CBS needs to keep the show around, 15 years and 31 seasons later.

In just two hours, though, Survivor Cambodia‘s finale made the argument for why this show, format, and game continue to thrive, engaging both casual viewers and superfans—and producing exceptional television that rivals any prestige scripted series.

Everything was there: twists in the game, epic challenges, the effects of the elements, detailed and visceral production design, the joy of victory and the anguish of defeat. There was comedy and there was drama, sometimes within moments of each other.

And it came after a season that itself was essentially perfect, including a real-life survival story. That the TV show was able to recover from the awful and abusive spring season illustrates the strength of the format, which, yes, is very dependent upon casting, but also continues to offer new surprises and possibilities. So did the producers, making smart tweaks to familiar elements that kept this season’s strategy in a constant tumble.

At the end came the show’s fourth unanimous winner, Jeremy Collins, who was basically a perfect winner. From his huge gamble to save Fishbach to his final challenge win, he was adaptable and smart. His game play was often a perfect illustration of this season’s major shift, which was away from alliances that came with bitterness for betrayal and toward voting blocs/short-term alliances that advanced their members one step closer to the finale.

Not insignificantly, his win was locked before the final Tribal Council, according to Stephen Fishbach. For such a clear and unambiguous outcome, though, it was a wild finale.

Even with the outcome clear, watching Jeremy’s—and the other players’—journey from start to finish was thoroughly entertaining, and every episode this season delivered.

A heavy-handed edit for a deserving winner

If there’s a weakness to this season, it’s that Jeremy’s win was telegraphed from early on. Those studying Survivor can use this as the perfect example of an archetypal hero’s edit, as Jeremy was repeatedly given moments to deepen his character and prove to be a proficient and worthy player and winner. Compare that edit to, say, Stephen Fishbach’s, which unfairly reduced him to a bumbling clown until it gave him a nice moment or two before he left the game.

Jeremy’s victory was obvious right through the final Tribal Council, when Jeremy finally revealed what Val had said to him about her pregnancy. As he told them, “my second chance is all about family” and “I don’t even care about me,” the music dropped and swelled. (I imagined Cristof/Probst in the control room.)

After the final challenge, a repeat of one we first saw at the end of Survivor Tocantins, the challenge’s winner, Jeremy, squatted down to cry because he’d won immunity—and most likely, the game. “I feel like I’ve been through this already—I’ve thought about this,” he said. Behind him, Kelley Wentworth was crying, too, because she knew she was done, great contrast that Jeff Probst verbally explained, because he likes hitting us in the face with obvious pie.

Even though Kelley’s exit and Jeremy’s victory seemed obvious at that point, what was so great about this season—both its game play and its editing—is that it kept showing us a lot of what was happening and also kept us guessing.

Kelley won the second immunity challenge, basically saving herself and sending Keith to the jury. But even that obvious vote wasn’t certain. Kelley constructed a fake idol to take advantage of the producers’ decision to change the appearance of every idol this season. It seemed like, for a moment, the alliance might fall for it, but they did not. (I appreciated Keith saying at the reunion that he didn’t want to play the fake idol because “I thought it was a cheesy way to go out.”)

Keith nearly left the game during the finale’s first Tribal Council, volunteering to sacrifice himself and let Kimmi stay in the game. That crazy and heartbreaking and WTF moment concluded a completely insane series of events that saw a whole page of the Survivor rules play out.

All of this began with Kimmi’s plan to “swoop in and make my dreams happen.” Aligning with Kelley and Keith, she planned to blindside Jeremy. That led to a fascinating conversation during which Tasha and Spencer told Jeremy that Kimmi was planning just that. Jeremy trusted his ally, opening up the very real chance that he’d be blindsided.

But once the votes were cast, seeing Kelley play her idol prompted him to play his, and thus Survivor had its first ever vote that resulted in zero votes recorded.

A revote resulted in a tie between Kimmi and Tasha, and since everyone indicated they wouldn’t change their vote after another revote, Probst declared the players deadlocked. That left those who didn’t have votes—Spencer, Kelley, Jeremy, and Keith—to decide between the two, unanimously, in two minutes. Failing to do that would have made Tasha and Kimmi immune and the all other players would have drawn rocks. However, because three of the four players were immune originally, the only player left to possibly be eliminated would have been Keith. Because of that potential consequence, Keith and Kelley joined with Jeremy and Spencer to vote out Kimmi—though not before Keith first volunteered to sacrifice himself for Kimmi.

This was so very complicated that Probst explained it during one of the live-from-L.A. segments, and he actually drew on a photo of that Tribal Council to explain what’d happened. That was the best use of those cut-to-live moments the show has ever done: it added value to what we’d just watched.

Keith was one of the many surprises this season, dominating in challenges and being even funnier than his previous season: I laughed out loud several times last night, even at his perfectly timed spit during an interview. Because he was so often on the periphery of game-changing votes, though, his exit came at the right time.

While the final three didn’t need him in it, I think it would have been far more interesting with Kelley in it. Stephen Fishbach wrote on Twitter that Kelley Wentworth would have won had Jeremy voted out Spencer during the penultimate Tribal Council, though later pointed out it could have resulted in a tie. In other words, there were more possibilities.

In other fascinating developments, across two of the final three Tribal Councils, Spencer arrogantly issue threats, including to Jeremy (“I would vote for her and I would spend all of my energy making sure she won.” “I would consider it a terrible move on your part—no offense.”) This came back to haunt him during the jury, though he did make a good, introspective case for himself, saying his “arrogance is a mask for insecurities” and “my confidence might have gotten carried away.”

Jeremy, too, had to be contrite, mostly to Kimmi, who was so upset she was crying during the final Tribal Council over Jeremy’s days-earlier reaction to learning he’d been betrayed by her. “I was very upset—she hurt my feelings,” Jeremy said, effectively turning his reaction back onto Kimmi for trying to blindside him.

The final Tribal Council had quite a few strong moments, thanks to a relatively non-bitter but still tough jury. Abi even asked a terrific question, asking the players to highlight their most subtle move in the game. Tasha seemed to be mostly ignored by the jury, and she seemed to have the toughest time making the case for why she should win. And it was capped by Kass saying, after Probst gathered the final votes, “I hope he gets on a jet ski.”

Kelly Wiglesworth called back to season one of the show and told the final three, “pick a number between 1 and 10.” I would have found that to be several times more charming had she then laughed and said, Just kidding, I’m not really going to conclude my second chance story by behaving exactly like that dumbass in season one who cost me $1 million.

It was a little suspicious that everyone, in the middle of the game, was talking about how this was the best season of Survivor ever; it’s almost like they’d sat in on Jeff Probst’s story meetings.

Yet this is one case in which Probst’s hyperbole and storytelling hammer, the players’ defense of their season, and fans’ reactions all aligned: this was a terrific, nearly perfect season of Survivor, definitively one of the best ever.