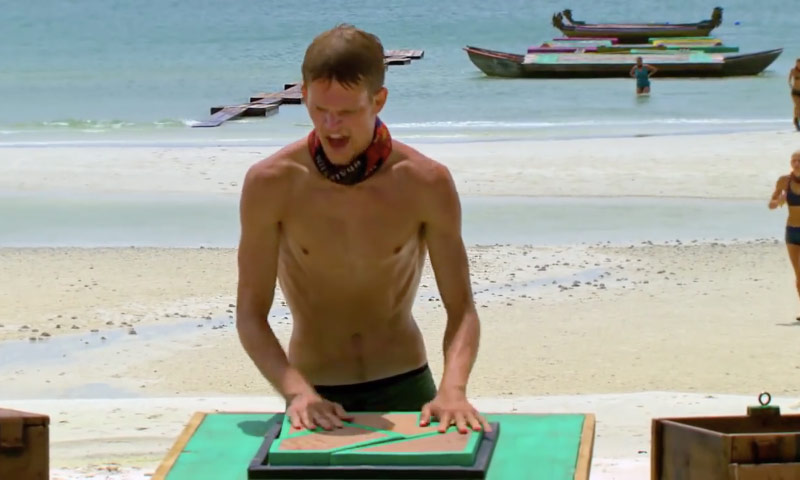 Spencer Bledsoe completes the puzzle to win immunity during episode 13 of Survivor Cambodia.

Spencer Bledsoe solved the five-piece puzzle at the end of the episode 13 immunity challenge in less than 15 seconds. It was so quick that Jeff Probst seemed flabbergasted, and said later, “We have tested that puzzle a lot; nobody ever has done it that fast, ever. That was amazing.”

How did Spencer do it? Here’s the full story of that Survivor Cambodia: Second Chance moment, and started with a suggestion from a fan.

Demonstrating some exceptional foresight, Survivor podcaster Colin Stone, of The Dom & Colin Podcast, wrote to Spencer and suggested he study two of the puzzles from Survivor Worlds Apart‘s first episode, because it was was skipped by the players and Colin thought it might be reused.

“Behind every great man is me, smiling and taking partial credit.” –Tom Haverford pic.twitter.com/yJbtSTPaa3

Of course, that puzzle was recycled, presenting a fascinating consequence of re-using challenges—contestants can now practice.

Here was Spencer’s reply to Colin’s suggestion, which Colin sent to me:

How Spencer memorized the puzzle

While Spencer’s “MUST-dos” list of things to prepare includes “memorizing likely puzzles,” that doesn’t quite capture what he did. Spencer actually recreated the puzzle and practiced it.

In an interview not included in the episode, Jeremy describes that process:

“Spencer memorized the puzzle from season 30. Paused it on his TV, traced it on a piece of paper, cut it out, and did it himself. So right when Jeff said it’s that puzzle, he said, ‘I know it.’ And it took him five seconds to put it together. … What a nerd, such a nerd. Ugh.”

In another deleted scene, Spencer acknowledges studying the puzzle, though he doesn’t mention the initial Facebook conversation that pointed to the specific five-piece puzzle:

“I actually—as the enormous, uncool, Survivor geek that I am—memorized this puzzle. I was bored one day, and I said, Why not watch season 30 of Survivor for the fifth time? And I watched this challenge, the first challenge of season 30, and said, Wow, that five-piece puzzle wasn’t used, nothing would stop Jeff from bringing it back some day Why don’t I just do it? Why not? And I memorized the puzzle.

It took a lot of self control when Jeff said that that was the puzzle that was going to happen, not to just start celebrating. I know what kind of puzzle that is. … I know that if you’ve done it, you can probably get it in 10 seconds, and if you haven’t, you’re gonna sit there and stare and feel dumb. And so the fact that I knew that puzzle, I felt really good.”

The level of game play on Survivor Cambodia has already been high, and this takes it to another level altogether.