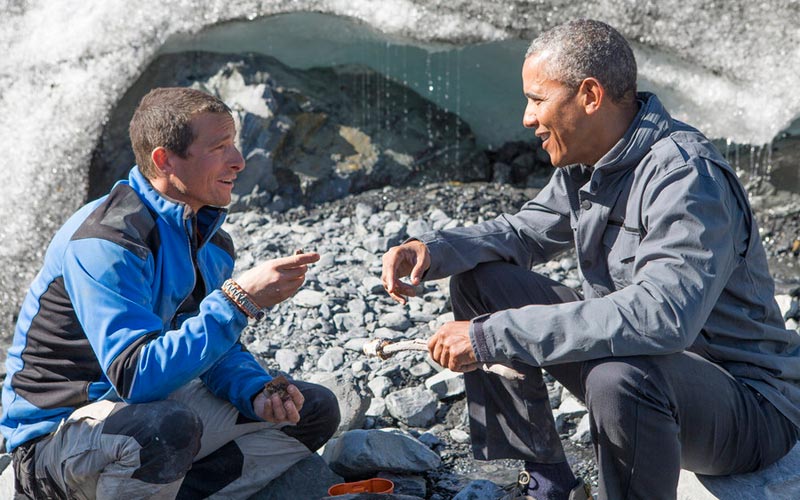 Presidents have appeared on reality TV shows before, but Barack Obama’s appearance on Running Wild with Bear Grylls was unlike anything I can remember. Though it was clearly driven by a political message, this was not the typical pre-taped announcement, and there were plenty of unscripted moments.

Of course, this was nothing like usual Running Wild episodes, where Bear Grylls takes a celebrity on an overnight trip, doing scary things like rappelling off a cliff or sleeping on a rock ledge. While those episodes are heavily choreographed—it’s clear that everything has been planned out in advance, which is obvious because there just happen to be cameras positioned on the allegedly spontaneous routes—they also produce real danger and real emotion.

Here, Bear Grylls and Barack Obama basically took a short walk through Harding Ice Field to the base of a glacier that’s receding due to climate change. They couldn’t do anything super-exciting because, as The New York Times reports, Obama’s appearance “presented a unique challenge. The White House has a set of ironclad protocols—the president, for instance, cannot eat or drink anything that has not been vetted. Nor could Mr. Obama put himself in danger, as previous guests have by jumping out of a helicopter or rappelling down a mountainside.”

Once at the foot of the glacier, pronounced glass-eee-air by Bear, the show’s host cooked a salmon that had been partially eaten by an actual bear, and then Obama made smores.

There was fun banter—Bear, looking at a smore: “I love you but that looks terrible.” Barack: “I promise you, it’s better than anything that you’ve ever had on this show. … Come on, man, that smore’s solid.”—and also conversation about both survival skills and preserving the environment.

At the end of the episode, Bear Grylls, who’s an evangelical Christian, prayed for and with the president, and told the camera, “I feel a real kind of care for this protection and love he has for the planet, and I really want to champion what he’s doing.”

Altogether, it was more than a politician’s speech and less than a typical episode. Seeing a sitting president in such a casual, conversational environment was remarkable. As a long-time reality TV show viewer and critic, what stood out most to me was seeing the President of the United States participating in reality TV conventions.

The president defines Bear Grylls and draws a line

Obama showed that he’d been briefed or did his homework, and momentarily seemed genuinely uncomfortable as he described what Bear Grylls is best known for. This came during an on-the-fly interview—yes, an OTF with the President of the United States of America. He said:

“This seems to be Bear’s main claim to fame, is that he drinks his own urine. Ah, uh—I suppose, in extremis, it’s something that I would do, if the alternative was death. It’s not something I’d make a habit of, and I probably wouldn’t do it just for a TV show.

… I feel fairly confident that I’m never going to find myself in that circumstance, but it’s good to know. I’ll file that in the memory packs.”

The president jokes about interrupted sex

Bear Grylls: “You know when bears are most dangerous?”

Grylls: “Feeding, protecting their young, if you surprise them fornicating.”

Obama: “You know, I think that’s probably true for humans as well.”

Bear Grylls did the thing he does so well, which is pretend that he’s alone with his traveling companion and is  making spontaneous decisions about things that were well-planned far in advance by the production.

In this episode, there was an even larger entourage off-camera, thanks to the status of Bear’s companion. And Obama totally broke the fourth wall while trying to take a selfie with Bear Grylls.

Trying to get the camera to work, Obama looked to the side and said, “Hey, Joe, what’s the code. I need a passcode. Do you remember it?”

While the cameras never showed the entourage, Secret Service, or anything else, we did hear an off-camera voice that was subtitled: “You want to use mine?”

The president worries about his edit

Perhaps the most surreal reality TV moment came halfway through, after the selfie, during another OTF interview. The producers of a reality show did to the president what producers have been doing to reality show cast members for decades, including an off-the-cuff, fourth-wall-breaking remark that the cast member thought would be left out.

However, President Obama recognized that this was likely to happen:

“I’m sure my girls are gonna be moritified by my lack of technological prowess. It’s possible you guys could edit that out. Maybe not.