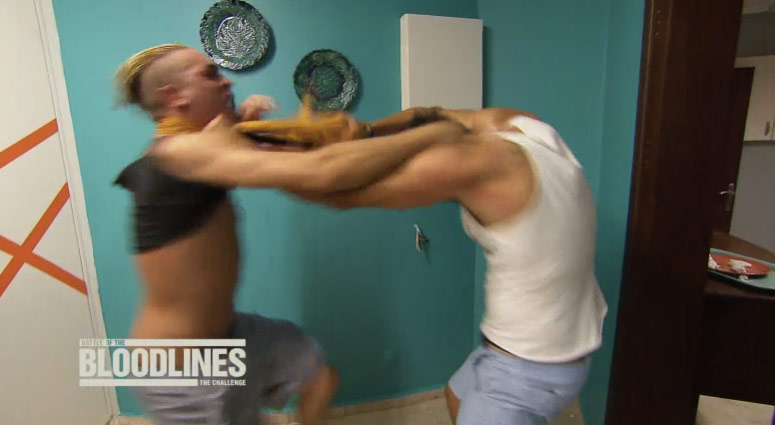 The first violent, drunken fight of MTV's The Challenge: Battle of the Bloodlines.

Over the past few years, very nice people have suggested I revisit MTV’s The Challenge, in particular because the actual challenges have improved. So, I recorded Battle of the Bloodlines, and was ready to get to know the cast—nearly all of whom I have absolutely no familiarity with—and see some good reality TV competitions.

Alas, before an actual challenge showed up, I was challenged, having to endure what too many MTV shows have become: drunken, violent messes.

Within the first five minutes of the episode, some cast members were drinking. Within the first 20 minutes, there was a drunken hook-up that resulted in cheating on a girlfriend. Within 25 minutes, a screaming fight. Before a half-hour was up, more screaming, plus crying—and then violent, drunken punching between actual brothers that broke something hanging on the wall.

The most ludicrous thing that happened the entire episode was host TJ Lavin, who has marginally improved over the years, said, “We here at the challenge don’t like violence.”

Bullshit. This one episode alone illustrates just how much The Challenge loves violence, which explains why the brothers who were fighting just got a warning, and why their fight received an entire segment of attention. If the show really rejected violence, there would be actual consequences, or the editing would cut around it and not fetishize it.

The show is competently produced, from the soundtrack to the cinematography, but so much of what is good gets lost in the content. What the edit includes and focuses on, what the producers tolerate, and what they create with the mix of alcohol and competition and expectation ruins everything around it.

One of The Challenge‘s own cast members called it “toxic,” “dangerous,” and sexist, and there’s enough of that on the screen to prove the point.

There is so much repulsive sexism, and it isn’t judged or dismissed, but rather is celebrated by the editing. One fight was blamed on women for being “dramatic,” even though it’s the men who who kicked off this season’s drama. Later, Tony blamed his drunken hook-up on the woman involved, because on this show, women are sluts and men are just being guys.

During that first challenge, as the women raced each other to the top of a mound of dirt, Bananas described the women as behaving like they’re at a “half-off shoe sale”—not, you know, intensely competing to win. The editors then cut to someone else, Dario, objectifying the women: “I’m too busy looking at booties.” There was no parallel commentary from the women when the shirtless men in wet underwear started their challenge.

As to the actual competitions, they were decent: filling up buckets of water from a shower at the top of a small hill, requiring lots of scrambling and racing up and down; for the elimination challenge, unraveling a large, heavy rope from posts. Solid, not spectacular. They do not have the level of detail and attention (or budget) of a Survivor challenge, nor the wit and humor of other shows’ challenges.

There are, perhaps, more spectacular, better produced challenges to come this season. But the actual competitions were such a little part of these first 90 minutes, and I can’t imagine watching more of that just to see what the challenge producers came up with. After the team challenge, there was, of course, more drinking, partying, screaming, fighting, hooking up.

If I was capable in finding humor in drunk people acting stupid and fighting, I might love The Challenge. I’m not. I appreciate those who’ve encouraged me to watch again; I’d love to know what you love about this.

To a return to a metaphor for reality TV I overused previously: As much as I am attracted to reality competitions, I don’t want my reality competition pizza in a box full of wet raccoon feces. But with its celebration of ugliness, that’s what The Challenge delivers.