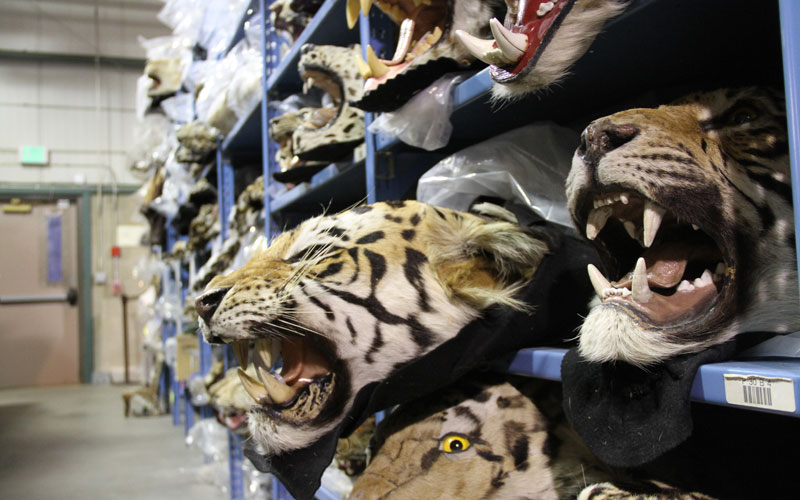 The director of the Oscar-winning and thriller of a documentary The Cove returns tonight a new horrifying documentary, Racing Extinction. It debuts today on Discovery in more than 220 countries and territories; in the U.S., it airs at 9 p.m. ET.

Louie Psihoyos’ The Cove had a narrow focus, dolphins that were being captured and sold into captivity or slaughtered, and Oceanic Preservation Society’s covert operations were used to expose a singular horror. It was a tense and compelling film, following both activist Ric O’Barry and breaking the fourth wall to show Psihoyos and his team making the film and working to capture footage.

Racing Extinction is similar in its style but has a much broader focus: the current extinction of species that’s being fueled by poaching and climate change. Examining the different facets of extinction makes for a less narrative film—this is far more scattered.

But there still is tension, especially as the team goes undercover in black markets where endangered species are sold in unimaginable quantities. And like The Cove, it ends with powerful and horrifying images being communicated to the world, and comes with a campaign to affect change, #StartWith1Thing.

Director Louie Psihoyos on documentaries and his new film

“I don’t love most documentaries; I’m not a big fan,” Louie Psihoyos told me late this summer. He did, of course, win an Oscar for his documentary.

“I love some of them, but usually after 45 minutes, I get sort of, Oh my god. I feel like I’m being shoveled information. If you can get the exposition to an important story as you’re being taken on what feels like a narrative trip, you can basically piggyback on a theme on a theme that’s worked very well for movies.”

That theme is found in his favorite kinds of thriller movies. “I love the Bond films, and Ocean’s Eleven,” he said. “It’s best if people feel like they’re going on an adventure.” Racing Extinction does that by taking viewers along with the crew as they make the film. “If you’re actually in our lives, it feels like a story,” he said. “What’s it like to go undercover? What it’s like to bust bad guys? It feels like an adventure film; it doesn’t feel like a documentary.”

Again, Racing Extinction covers a lot of ground, and Psihoyos told me that was both an obstacle and opportunity. “We knew it was going to be challenging to try to stitch it back together, but that was the beauty of it. It was a high-wire act,” he said.

Creating change with a documentary

Executive producer Fisher Stevens, who also produced The Cove, told me, “We didn’t want to make another movie that was in a vacuum,” he said. The Discovery Channel broadcast “gives us such a bigger reach.”

Who is the film trying to reach? Is the those who believe climate change is a problem, or those who keep denying it? Stevens said, “They’re not very many climate deniers. I find it mostly people that have worse problems and they just don’t want think about it because they can’t afford to eat or something.”

Psihoyos said that some people, such as oil company executives, are “lost causes, but I’m targeting their kids, and their wives,” he said. He told a story about being at a meeting and discussing the long-term consequences of fossil fuels with an executive. “After that meeting, this woman came up and wanted me to sign a Cove DVD.” Psihoyos said was the wife of a Shell Oil executive.  “You want to make it socially unacceptable to burn fossil fuel.”

He added that the Oceanic Preservation Society “is in for the big fight. It’s not going to be easy. When we were making The Cove in my backyard in Colorado, I thought it was delusional to think that I could make a movie about a dolphin slaughter that anybody would want to see. You look at SeaWorld stock: we helped that tumble a billion dollars in a day. You look at the amount of cetaceans that are being killed, we’ve reduced it by over 65 percent in Japan, working with other organizations. That was a crazy notion, but it’s happening, it’s working.”