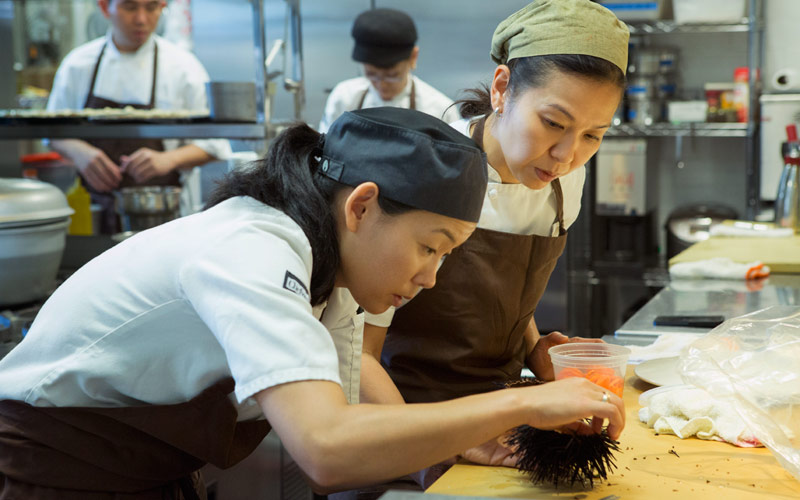 Chef’s Table premiered on Netflix in April. There are just six episodes, and they are wonderfully sublime and perfectly crafted.

Yet almost eight months later, I am still not finished watching its first season.

Unlike Netflix series that are designed to cliffhang or propel you to the next episode, Chef’s Table 50-minute episodes stand alone. They’re chapters in the same book, yes, but ones that give enough to digest without having to race ahead to the next one.

In the same way that I wouldn’t want to eat six meals in a row at exceptional restaurants, after watching one episode, I’m satiated, knowing that the series will be there the next time I want to sink into one of its stories. I want them to last, and I want to give each one time and attention. A series like this deserves that.

Chef’s Table is primarily talking: six chefs narrating stories of their lives, and anecdotes from their lives as chefs, with experts and relatives offering some contextual perspective.

These autobiographies often turn up unexpected details that draw us closer, because there’s a moment of vulnerability or passion, heartbreak or triumph. The stories are not about food and cooking, they are about people—artists whose canvases are plates. Even when the story is explicitly about food, building up to the reveal of a particular dish, there is very little how and quite a lot of why.

While this is a surprising amount of talking for a television show, there is plenty of showing: the accompanying images accompany the words, a perfect pairing even when the image isn’t directly illustrating what is being said.

The camera slowly pans across tables and landscapes, and dives in for close-up pans across food on plates. Some moments, particularly as chefs work with food, time slows down. In that lies the craft, the artistry, both in the kitchen and in the television show itself.

Those moments seem particularly electrified by the music—sometimes classical pieces, sometimes original score, often strings, ranging from subtle to dramatic. These layers work together, and show the beauty and profundity in even the smallest of moments or phrases. (It is also a style has been delightfully parodied.)

Chef’s Table‘s exquisite opening sequence uses a combination of high-speed and slow-motion footage from its episodes set to the “Winter” section of Vivaldi’s The Four Seasons, and that sets the tone and voice for the series. Although there are four different directors—creator David Gelb and Andrew Fried, Brian McGinn, and Clay Jeter—there is a unified style and voice in each episode.

The success of reality competitions have driven food TV away from its origins in strong, TV-friendly personalities who demonstrate cooking, away from Julia Child. Food television has largely, though not entirely, settled into a space where food is the fuel to be shoveled into the fire pit of drama, and the heat causes chefs to flame up and flame out.

That drive toward character-driven melodrama has, ironically, lost track of the people, rarely bothering to push past the surface and hardly ever diving into their souls as artists. More chefs, less food, so much lost.

Gelb and his collaborators have reintroduced television to what made food work on TV in the first place: people and their passion for their work and art. By packaging chefs’ stories in a finely crafted hour that shows as much care for the medium as these chefs show for their own work, Chef’s Table elevates food but more importantly, elevates people.

It says that what matters are the people and their stories: what drives them, how they got to where they are. It demands appreciation from the finest of details and the smallest of ideas. As the chefs are connected to their food and art, we are connected to them.