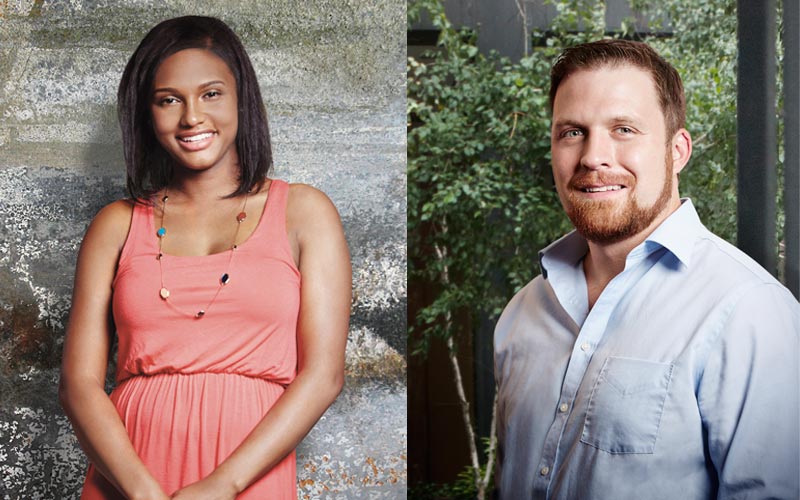 Vanessa Nelson and David Norton, both of whom decided to get married to strangers on Married at First Sight's third season. (Photos by Zach Dilgard/A&E)

Married at First Sight attempts its experiment for the third time tonight, pairing three couples of absolute strangers who meet as they get legally married. The first season was compelling, entertaining, and insightful. The second season ended in threats of violence and broken relationships. (The ugliness continues, as A&E is now fighting in court to keep footage from season two away from one of its cast members, Jessica Castro, who is suing her ex, Ryan De Nino, for harassment and more.)

Out of six relationships, two have survived. The FYI and A&E series is entering Bachelor territory with that kind of track record. Whether it’s just reflective of the way some relationships fail or evidence that arranged marriages don’t work, it’s easy to wonder: Why would anyone subject themselves to this—especially at the same time as other relationships formed on the show were failing so publicly and so disastrously?

I asked two of the participants—they may or may not be matched together on tonight’s premiere (it starts at 9 p.m. ET, after a one-hour casting special), but were just the two contestants made available for an interview.

Both of them live in the Atlanta area, where this season took place. The previous seasons matched people living in the New York metro area; producers cast in the same place so no one will have to relocate or leave their job, and can just live their normal life during the experiment.

Well, as normal as it is to have camera crews following you around after marrying a stranger.

Vanessa, 26, had quick and clear answers to questions about why she was interested in Married at First Sight. She’s watched the show from the first season and trusted that the experts “really take a lot of care” in matching the couples. That gave her confidence in the process.

“I was also able to see the successes and learn a lot. And I was just in a place in my life where marriage was something I really wanted for myself. So when I saw this opportunity, I just took the chance,” she said.

However, Vanessa did say she had concerns about what would be required in terms of having her life documented. “Marriage is something that’s really personal and intimate, and it can have a lot of ups and downs,” she told me. “I was definitely a little worried. How is this going to look?” Again, she had a quick, clear answer: “What was more important to me is that I keep the experience personal while I’m going through it.”

The Married at First Sight season two couples’ problematic relationships did not affect how she viewed her own relationship. “It was definitely disappointing to see the couples go through that. But every marriage is different, and every season of the show is different. So the experiences that I had in my marriage, I didn’t see them in any other marriage,” she said. “It didn’t take away from me wanting to be committed to the process and wanting to stay optimistic.”

David is described in A&E’s press materials as “a serial monogamist” who was on the verge of proposing to his most-recent girlfriend when that relationship ended, like so many other medium-term relationships he’d been in.

So why get matched to a stranger on television? “The more I thought about it—I had tried every dating app there is,” David told me. “I tried to date through my church and the girl says doesn’t date guys that go to the same church as her. Co-workers, friends of friends, I’ve tried everything. Why not? I want to be married; I want something serious. Here was this opportunity.”

I asked him if he was concerned about having his relationship unfold publicly was a concern. “Absolutely,” he said. “More so than marrying a stranger, that was what concerned me the most. Do I really want to be that open, and like you said, there’s a lot of people who criticize the decision to marry a complete stranger and critique every aspect of your life. I really went back and forth on it, but at the end of the day, I look at it as the price of doing business. And hopefully someone watching can take something good from it.”

The show is filmed, documentary-style, over the first six weeks of the marriages. Although that period is referred to as “the experiment,” neither Vanessa nor David felt like they had an out after six weeks—and after all, they were legally married. “Real marriage, you don’t have six weeks to decide,” David said. “You’re going into it knowing that’s the closure that viewers deserve and want.”

He’d actually never before heard of the show when he learned about casting. As a result, he told me that he watched “season two in real time; I didn’t watch season one until after I was married.”

In other words, he watched relationships failing on the very show that he was now part of. But he was careful not to compare his relationship to those marriages. “You’re seting yourself up for failure,” he said. “You’d be hurting yourself and adding some unnecessary self-infliected stress if you let what previously happened get in the way of your own.”

“You want to see them succeed, because you know how unique of a journey this is,” he said of the MAFS2 couples. “You can’t gauge someone else’s experience and have it affect your marriage. You have to have the blinders on and say, Our story’s completely different. We’re not Jason and Cortney, we aren’t Sean and Davina, we aren’t anyone who’s been on the show before.”