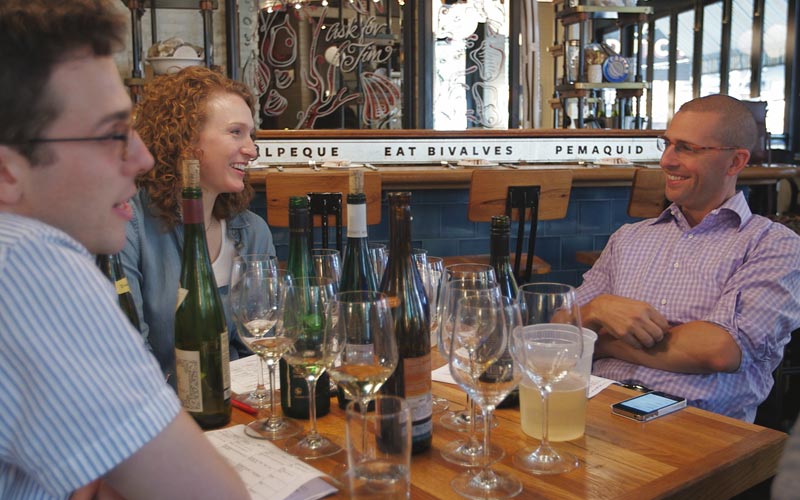 Alcohol flows through many reality television shows, sometimes on the surface, sometimes behind the scenes. A glass of wine in Anthony Bourdain’s hand as he mentors home cooks is on one end of the spectrum; on the other, drunken violence. Too often, alcohol amps up behavior, sometimes to intolerable levels.

Throughout this genre’s life, alcohol has been both a punch line and a killer.

So it’s remarkable that alcohol can take center stage on a reality show and almost be more prominent than the show’s cast, yet also be appreciated and celebrated, not abused.

That’s what happens on Esquire’s Uncorked, the six-episode series (Tuesdays, 10 p.m. ET) that follows follows six sommeliers as they prepare to take the master sommelier exam. “Follows” isn’t quite accurate; this is not exactly a documentary-style show about their lives, but it is also not a competition created for television. Instead, it’s somewhere in the middle.

The show is basically a series of challenges to test their knowledge of wine, their abilities as servers, and their palates via blind taste tests—the same things they will have to know for the exam. Some are local, regional, or national competitions; others are tests designed by master sommeliers such as Geoff Kruth, apparently just for the show’s cast and cameras.

What Jack Mason, Yannick Benjamin, Jane Lopes, Dana Gaiser, Josh Nadel, and Morgan Harris do is impressive: the way they list flavors, identifying regions and types of wine from sight, smell, and taste. How they deal with obstacles presented to them during mock services, such as an obnoxious guest who has impossible demands.

They’re often tested by master sommeliers, and watching experts being challenged by even more impressive experts is thoroughly entertaining television.

The pleasures of Uncorked: wine and wine experts

Fragments of the six sommeliers’ lives are included between these challenges, but there’s very little the series imparts about its stars beyond their skills and relationship to the upcoming test. After four episodes, their knowledge of wine and abilities stand out more than they do—though they’re agreeable and charming, for the most part, even in defeat.

Uncorked is based upon the documentary Somm, whose directors serve as executive producers. It’s produced by Left/Right, which keeps the show in line with Esquire’s aesthetic—there are well-framed establishing shots and a high-end magazine feel—but mostly allows the production to fade to the background. This is not a show that feels like its scenes were constructed for television, even though some of the tests seem to be set up for the benefit of the show.

It works because, even when the cast members are tested for the sake of the cameras, they’re practicing and learning, which is exactly what they need to be doing. There is none of the artifice typically found on reality TV competitions.

But there is still quite a lot of tension and entertainment in those moments. Watch one sommelier pour wine from a decanter back into the bottle, shaking but not missing a single drop. See other sommeliers attempt to extract a cork with an ah-so opener, one doing so effortlessly, another failing but doing so in a way that made him seem even more competent than some who were successful.

Can they pass the test? Who will do best at a challenging task? Can they identify a wine just by looking at it? On-screen texts clues viewers in to the answers sometimes, such as during blind tasting, which adds to the suspense.

Yes, that’s suspense from alcohol that’s sometimes just being spit out. Uncorked finds its power in wine and knowledge about it, but it doesn’t need alcohol or any other reality television chicanery.