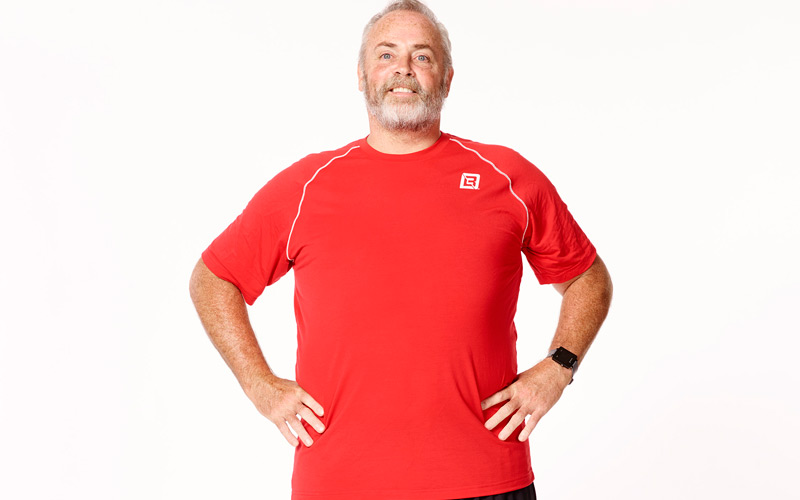 One person competing to be The Biggest Loser on season 17, subtitled Temptation Nation, is Survivor Borneo winner Richard Hatch (Photo by Chris Haston/NBC)

Survivor Borneo winner Richard Hatch, who weighs 314 pounds, is one of the cast members of NBC’s The Biggest Loser, which has changed almost many things for its 17th season, including its logo. It also has a subtitle: “The Biggest Loser: Temptation Nation.”

The season, which starts Jan. 4, will have a “an updated state-of-the-art gym, a new logo, fun format changes and a return to the popular team vs. team competition.” There will also be a season-long theme, according to the network’s press release:

“The theme this season is ‘Temptation’ and contestants will learn how to deal with all kinds of temptations in the real world, ranging from food to money to electronic devices. Players will be spending more time off-campus than in previous seasons, learning to face a variety of temptations head on and navigate the many challenges that can be stumbling blocks to living a healthy lifestyle.”

NBC previously announced that Bob Harper would host the series and Dolvett Quince and Jennifer Widerstrom would return as the only two trainers.

Hatch, who’s 54, is listed as one of two “strangers” on the list of 16 cast members (below). That’s because he’s not competing with anyone he knows. When I interviewed him in July, Hatch said that he was writing a book and also had other ambitious goals for this year: “I’m applying to Brown’s doctoral program this fall, and I’m producing television.” He didn’t mention weight loss or a return to TV.

In an interview with People, Hatch talked about how he’s presented himself to the world:

“I’m not an exhibitionist, but I don’t care either, so I’m often naked. It’s just the way it is. I don’t give a crap about how people feel about how I look. But personally, I know that I’m fat.”

He says his lack of concern about his body came from his childhood:

“I was raped at 8. Molested at 10. In the showers in sixth grade, a prankster peed on my leg,” he says. “At some point I decided what people thought of my body didn’t matter.”

While he doesn’t have a weight loss goal, Hatch said:

“I want to know why so I can see if there is something I can do about wanting something different – something better. … I know I’m not healthy. I have high blood pressure and high cholesterol. So, it’s not about being able to lift this or do that. It’s, ‘Is my blood pressure low again? Is my cholesterol level right?’ That’s where I’m headed now.