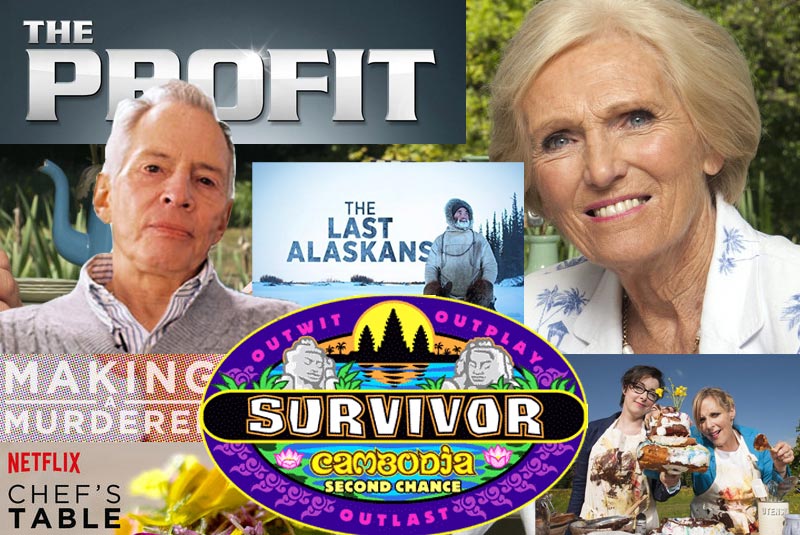 The best reality TV shows in 2015: The Jinx, The Great British Baking Show, Survivor, The Last Alaskans, Making a Murderer, Chef's Table, and The Profit. (Composite image of press photos and logos by Andy Dehnart)

This past year, reality blurred celebrated its 15th anniversary. While the origins of reality television stretch back to the 1970s and the 1990s, the wave of reality shows that we’re currently riding began shortly before this publication was born. What’s incredible is that two shows from that summer continue to attract interest, and one of them is as creatively strong as ever, which is why it makes my list of the best reality TV shows of 2015.

The shows that earned my attention and awe this year were ones that found themselves to the opposite ends of the spectrum: several were quiet and deliberate, others big and bold. Some of these unscripted shows attracted large numbers of viewers and buzz, others did not.

Creatively, however, they all demonstrated that this is a genre capable of producing great art and entertainment. Let’s hope for more reality television of this quality in 2016.

I am so grateful for PBS’ decision to broadcast two seasons of The Great British Bake-Off, which people in the UK (and crafty people in the US) already knew was exceptionally charming and delightful. Everything American reality shows desperately need was here, and mostly, that means the absence of artifice and faux drama. ABC’s The Great Holiday Baking Show managed to import the formula and do it right, even if it was missing the Britishness of the contestants and the wonderful contributions of Mel and Sue.

Breathtaking visuals brought to life by incredible drone camera footage drew me in, but what kept me was the silence. Animal Planet made an Alaska-set series feel fresh and new by allowing the show’s producers to be hands-off. Who knew quietness could make for such engaging television?

Chef’s Table works even though it’s more telling than showing. There are great visuals and music, yes, but at its core, Chef’s Table is chefs talking about their craft. As those stories came to life, they reminded me of the power of food TV done well.

The Jinx, HBO,
and Making a Murderer, Netflix

The year began and concluded with true-crime series that surprised with jaw-dropping moments—“killed them all, of course”— and footage. The two series couldn’t be more different, though, in terms of their construction: The Jinx placed its director front and center as a character and raised still-unanswered questions about its filmmaking, while Making a Murderer is more of a well-crafted stream of information. (I’ll have a full Making a Murderer review early in the new year.) By diving deep into cases, though, both found drama in real life, just like the best reality TV.

Survivor has earned its place at the top of reality television competitions for many reasons, and this fall’s season 31, Survivor Cambodia, exemplified everything the show does so well. It had a lot of real-life and game-play drama. But it also deserves to be here for rebounding so cleanly from a dismal spring season dragged down by the abysmal behavior of its cast and assisted by the dreary location and misguided twist. Survivor continues to excel in part because its format and formula is resilient, and even a disappointing season isn’t unwatchable.

Marcus Lemonis’ real-life investments in small businesses is consistently interesting and dramatic, and I am always eager to watch a new episode. This past year, The Profit has expanded by following up with progress—or the lack thereof—with previous investments, and even spent half of one episode on a failed deal.

King of the Nerds, TBS, and Santas in the Barn, truTV

Both of these shows were pure joy: witty, light, with little consequence but a terrific attention to detail. (TBS’ cancellation of King of the Nerds is still disappointing.)

Actual survival was a challenge for the group of men (including a few camera operators) dropped off on The Island, but the real highlights were the unexpected, dramatic unscripted moments.

There is other television besides reality TV—a record 409 dramas and comedies, actually. (409!) One of those shows, UnReal, used reality television as a springboard to dramatic television. At its beginning, UnReal was a near-documentary of The Bachelor‘s early years, but as it took soapy twists and turns, it also became a character portrait of two women with very different motivation and action. They were neither villains nor heroes, but real, complicated people struggling with at least some of the things the people who produce reality television have struggled with before.

By the way, of the other dramas and comedies I watched, my favorites included:

They didn’t do anything spectacular or new, but all of these competitions were ones I enjoyed watching: just fun reality television, the kind that should be the standard.

The revival of one of the best early reality series was both captivating and disappointing, thanks to producers’ decision to focus on the drama and reduce its characters to Real Housewives-style caricatures. Project Greenlight 4’s break-out star, Effie Brown, was already a success in the industry, but her willingness to stand up to Matt Damon, Peter Farrelly, and others was terrific television.

It was also a real-world conversation starter, the potent illustration some people still needed of how Hollywood still has problems dealing with non-white, non-male people on and off the screen. It’s just disappointing that the reality show wasn’t able to show more of the work Effie did behind the scenes on the film.