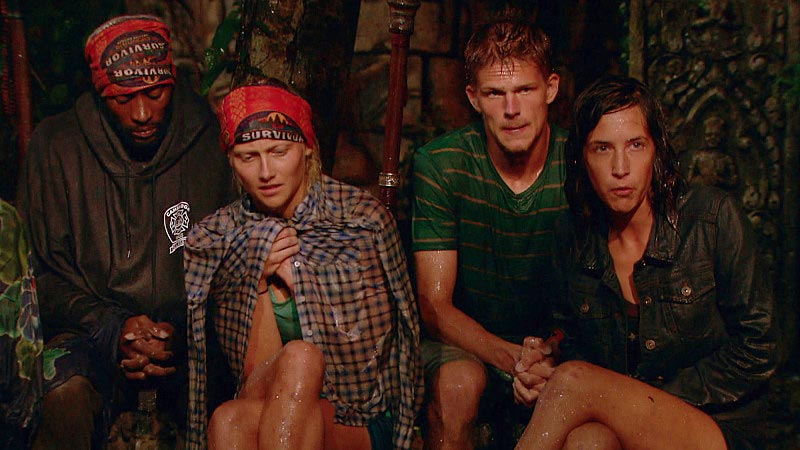 It says something about Survivor Cambodia: Second Chance‘s cast that the vast majority of the votes this season have been both exciting—holy crap exciting—and a little unfortunate.

The blindside during episode nine was thrilling—this season is earning that on-screen hashtag for sure—as was Jeremy, Spencer, and Stephen’s decision to team up with the three women responsible for last week’s blindside of their ally, Andrew Savage.

Yet I was also sad to see Kelly Wiglesworth go. She didn’t really earn much of the editors’ attention, nostalgia for season one left me wanting more from her as a player and character. Still, she’ll be missed, as will most of those who’ve exited. Yes, even the villains.

It’s just a strong cast. Every time someone starts talking about who to blindside, I find myself thinking, No, not that person! But again, that’s pretty much everybody.

Kelly’s exit almost seemed to be a gift, considering how absolutely miserable they all looked during Tribal Council. I felt for the players, shivering violently in their soaked clothing as they were drenched with rain and thunder cracked around them.

Tangent: The thunder during the immunity challenge made me wonder if it was a sound effect, since it did not have accompanying flashes, and also because I could not imagine production having 11 contestants, one executive producer and host, and dozens of crew members standing like lightning rods on the ocean during a thunderstorm. But there was very clearly close lightning strikes—”too close,” as Spencer said—during Tribal.

That Tribal and both challenges played out in the rain was a reminder of the physical environment, which has often faded to the background in recent years. And it also just elevated everything from the challenges to the strategy to see it play out as rain fell.

As someone who’s not a fan of the extra vote twist, I’m even less thrilled with the idea that a player can veto someone else’s vote. There’s just something about that core idea of Survivor giving everyone an equal vote and equal chance that makes it interesting and so variable. (Just look to Big Brother to see what happens when a game’s structure limits and boxes in its players.)

That said, Fishbach seems like enough of an underdog player right now—in the majority, but at the bottom. (Andrew Savage said in exit interviews that his plan and/or the alliance’s plan was to blindside Stephen sooner than later.) And since Fishbach is willing to do risky things, such as aligning with three easily-targeted players, I’m glad this power is in his hands, even if I don’t like it.

Speaking of additional power, Jeremy now holds two hidden immunity idols, having found a clue to the next one. Rather than being hidden in a challenge, it was hanging from a string on the beach with a light illuminating it, but Jeremy was able to sneak off in the middle of the night and get it. (Interestingly, Jeff Probst says that no one else could have taken the idol except Jeremy. Someone else may have seen him get it, but no one else could have acquired it. So, by finding the clue he basically found the idol.)

Jeremy’s getting a hero’s edit, from the idols to his emotional reflection on wanting to win for his family. Though he was genuinely emotional, he did frame that in a slightly odd way: “I just want Val to win. She deserves it more than me, you know,” he cried. That was sweet but also I was kind of worried he thought she was actually out there playing Survivor like last time.

Both challenges had firm connections to the strategy narrative. The immunity challenge, in the rain, had the great reveal of the buoys popping up after Probst dramatically cut a rope, and then Spencer and Stephen’s desperate swim for the advantage. Receiving it may have given Stephen confidence to push his allies Jeremy and Spencer to a move they otherwise might not have made.

The reward challenge—yet another repeat from Spencer and Tasha’s season, though at least a complex and epic obstacle course—led to a Survivor spa reward where we saw Ciera, the “queen of just saying things,” focused on getting rid of Jeremy. “You go to the end with Jeremy, you don’t win,” she said, by way of trying to convince everyone to make a move.

Yet even though he may be the bigger threat, ultimately, half of Jeremy’s alliance that was on the reward (Spencer and Stephen) teamed up with Ciera, while the other half, Tasha and Joe, were part of the blindsided group.

Will that fracture the alliance? Also, will Joe ever lose a challenge or will he just end up in the finals? And here’s another question:

There have been two major themes this season, and by themes I mean “things Survivor is telling us subtly via the equivalent of banner planes towing signs and shooting off fireworks and having Probst yell it over a loudspeaker.” Those have been 1) second chances, and 2) the game is different now.

If the players say that the game is moving faster, I believe them. And I have no doubt that the game has evolved since season one. But the editing—and Probst—keep hammering this idea over and over again that these moves represent some kind of revolutionary new game play.

Really? I’m not a Survivor historian who recalls every twist and turn of all 30 seasons, but I remember everything from large alliances picking off smaller ones to minority alliances flipping the game on those who were confident or cocky. Stephen suggested  “it’s a game of voting blocs,” but hasn’t that always been true? Putting too much faith in an alliance often means a surprise exit.

In other words, the game play is exciting, but that’s also what I’ve come to expect from Survivor. That’s the fun of the show!

It’s one of the reasons why I love the format so much, and why I can write about it every week; even if similar things have happened before, there’s something interesting happening.

Programming note: Next week, CBS has scheduled two back-to-back hour-long episodes on Thanksgiving eve. But because of the holiday, I won’t have time to write until the weekend, after we’ve all gorged on food and things.