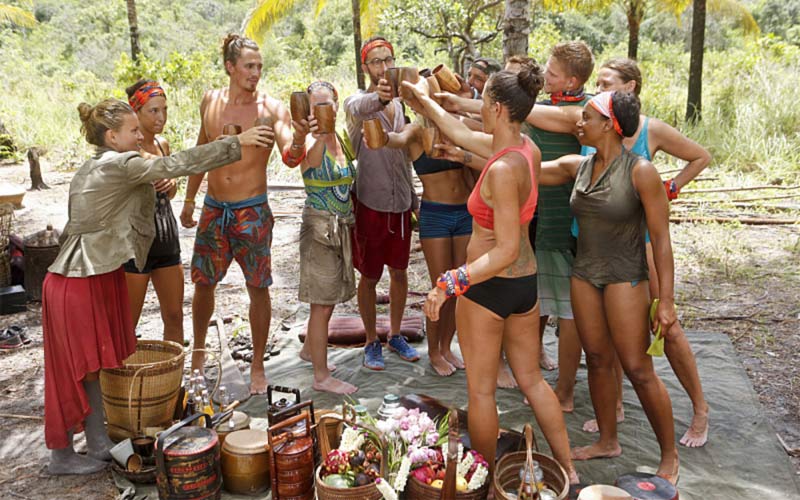 The best vote during the first post-merge Survivor Cambodia: Second Chance Tribal Council came from Ciera Eastin. It may not have been the smartest, and it may not bode well for her game, but her wait, what? vote for Andrew Savage was still the best vote.

It was the best vote not just because it was for Savage, and it represented the kind of deflated feeling that came from the result. The largest merge tribe in the history of Survivor went into Tribal Council with a minority alliance planning to play the numbers and vote-splitting against the dominant alliance. It was very exciting.

Yet what happened was that they decided to stick together and all vote out Kass. Those who voted out Kass included Kelley, who’d organized an anti-bro coalition of Kass, Ciera, Keith, Abi, and possibly Spencer and Joe to target Tasha. Minus Abi and Ciera, they all decided to go with the Kass flow.

Spencer and Joe may have been swing votes between two voting blocs, but really the whole tribe swung one direction, and it was the oh-okay-fine direction. Before that happened, Spencer appeared to have the most difficult decision, but even then his best bet was still to vote out Kass. His options were: betray and annoy Kass, who’d be out of the game, or betray and annoy Savage and others, who’d all still be there. Not a tough call in the game, ultimately.

Ciera’s speech at Tribal—”I don’t like to play with people who are scared to play”—seems in retrospect to just be annoyance at the way the vote was about to play out. Ciera’s frustration with the groupthink decision is understandable: For all this old-school, new-school talk, they’re playing a relatively safe game. (For now. This huge alliance can’t possibly stick together, right?)

That said, I am thoroughly glad to be rid of the Chaos Kass phrase and storyline. I think I like the idea of Kass’ game better than Kass’ actual game, though she’s consistently interesting.

Whatever her game is, I prefer it to Andrew Savage’s game, which seems to be based on expected entitlement for being an alpha male who’s not getting what he’s due. His insecurity is right there—he said he wanted to win immunity only to send a message to  these “young studs”—but not acknowledged. Although he wanted to target Ciera, and the studs argued for Kass instead, he was ultimately validated in that everyone lined up behind his alliance and his whining.

Savage started the episode crushed at the blindside of Woo. “They’re incredible liars,” he nearly cried. “I’m not gonna go down without a fight. Fuck them. Pieces of shit,” he said. Boo hoo, you didn’t tell me who you were going to blindside. Boo hoo, Ciera called him out on his alliance with Woo.

#FUAS indeed. (A+ to Eliza Orlins for creating that hashtag.)

If anything, the events of this episode were a clear illustration of the mistake made last week: The target should have been Savage, not Woo; that was Kass’ fatal mistake in the game. Maybe they intended him to be their next target, but then came the early merge.

It should have been a surprise, though perhaps because of all the switch-ups, they didn’t seem all that surprised or thrown off by it. I really appreciate those kinds of minor twists, ones that upend expectations for the audience and players about even the most basic game elements—are you paying attention, Big Brother?

All the switches did make it challenging to keep track of what tribe/alliance the players were referring to. In a perfect bit of timing, right after I tweeted that I needed on-screen graphics to help me understand, Spencer literally drew pictures in the sand to illustrate the tribe’s alliances to Joe, and then he also explained things in “Joe language.”

Nearly all of the episode was strategy talk and intrigue, with a brief break for the editing to mock Stephen Fishbach once again as he recited a poem to the tribe that was trapped in the shelter during a rainstorm. I don’t know what the endgame is for highlighting all of these moments with Stephen, but I fear that Probst thinks storytelling means hammering the same few points over and over again.

The immunity challenge was again a repeat from Cagayan, again, but that’s forgivable since it allowed Probst great lines such as, “You’re holding a lot more pole now.” But his double-entendre was overshadowed by Spencer talking about Joe and saying, “Joe is a guy I wouldn’t mind swinging with.” Hot.

Despite all the time spent at the new merged tribe’s camp, we did not see the new tribe name itself, but the name, Orkun, appeared on screen. It appears to be the anglicized version of the Khmer word for “thank you” (អរគុណ). But this is where my mind went immediately: