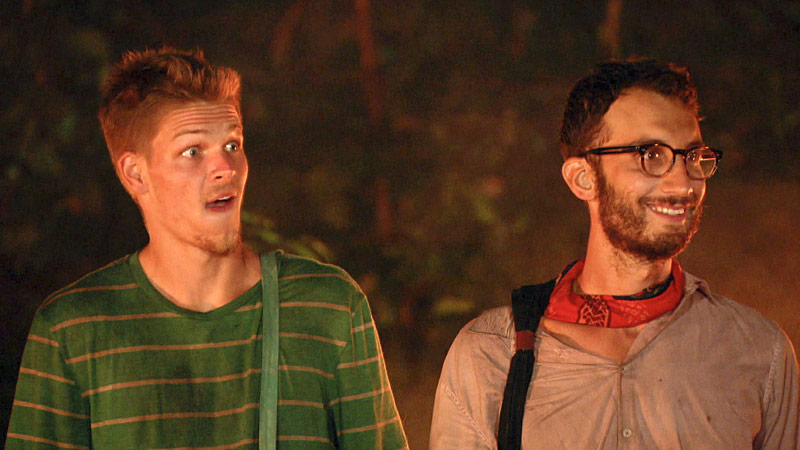 “Like Selling Your Soul to the Devil” and “My Wheels Are Spinning,” episodes 10 and 11 of Survivor Cambodia: Second Chance, were two of the best complete episodes in the show’s history. The effects of playing a physical and strategic game in the elements; a variety of challenges; raw comedy; game play that was complicated but followable; big, unexpected twists; lows and highs—everything was there, unfolding perfectly.

What makes Survivor such an enduring and exceptional television show, one that can be as good or better than scripted dramas or sports, is not just the game’s format, nor the production values, nor even the contestants. Instead, it’s the combination of all of it. And this was just the right mix, the perfect assembly of parts, from wildlife b-roll metaphors to Jeff Probst’s questions at Tribal Council, survival to blindsides.

If last season was mostly shattered fragments of those elements littering the floor and cutting our feet, this season is producing a cathedral’s worth of awesome mosaics, and it just created two perfect ones.

The only disappointing thing about either episode was CBS’ decision to air them back-to-back on Thanksgiving eve, which earned the show its lowest ratings ever. Survivor wasn’t alone here: Over on Fox, Empire also had its lowest 18-49 rating to date. When DVR usage is factored in, ratings will surely rebound a little, since there were at least some viewers—like me—who couldn’t watch live Wednesday. But these were the kind of episodes that work whenever, even if you’re watching them again, even if you already know the outcome.

Though nearly all of the cast got meaningful attention in one way or another, both episodes gave a lot of their focus to Stephen Fishbach. They represented a kind of high for his storyline, which has often dredged up the lowest of the low all season long, quite the contrast between Stephen’s first Survivor appearance and his off-screen podcasting “know-it-all” reputation.

Fishbach cleverly referenced that at one point by saying “I didn’t know it all” in regards to what was happening, such as the idol that saved him. Yet including him saying that was a moment, like so many others, that worked to establish Stephen as someone who didn’t know what was going on and couldn’t handle himself in this game.

He started off so confident that he was crowing about it in an interview, though seconds later he caught himself. “Never say that on Survivor, that you’re in a great position, bevause that’s the death knell. That’s when you’re going home.”

And it was, though it took two episodes and two wild votes for the some in the tribe to get rid of Fishbach and his advantage.

Despite being almost done in by #SevereGastrointestinalDistress, he was first saved by Jeremy playing the idol not even Stephen knew Jeremy had. It was a dramatic yet low-key moment as Jeremy said, simply, “Yeah, Jeff,” and then shuffled up to give the idol to Probst. “My decision comes down to who can I trust more going forward. That’s for Fishbach.”

That emotional if questionable moment—what a gesture! was that a smart move?—sent Ciera to the jury with just three votes. I will miss the way she played and played, such as on the reward, when she made the case for targeting Stephen. Who would have guessed that move could lead to her exit?

Jeremy’s save also kept Fishbach in the game long enough to have some redemption in winning the reward challenge which may have been my favorite challenge in several seasons. Besides that it was held at night, it was the perfect combination of physical and mental. Stephen had to run through the jungle with his swollen feet that even shocked Probst (“wow”).

Fishbach almost didn’t win, and it came down to literal split-second end between Spencer and Stephen. Stephen chose Jeremy and Tasha to take with him—saying thanks and repairing a relationship, respectively. He may have been able to win them back, but not the rest of the tribe, apparently led by Kelley, who kept her focus on the threat he posted—even when Joe was finally an available target.

Yes, Joe finally lost an immunity challenge, during the second episode. Like Fishbach, Joe found himself in a race to the finish with Spencer, though Spencer won. Joe does not give up easily, nor did he give up his chance to play for immunity when it was offered.

But first: misery. Starting at the top of the two episodes, the rain was brutal, with cold wind causing violent shivering. It went on so long there wasn’t even a break to allow for individual interviews; one of the many comedic moments was Keith hiding under a shirt as shelter while doing an interview.

The first reward challenge, a repeat of Survivor Tocantins’ full-tackle basketball in water, was infused with desperation for reward and temporary relief from the rain. I couldn’t keep track of who was on what team, but it didn’t seem to matter: everyone just wanted it, and fought hard for a break from the weather, like when Kimmi clung to Tasha as she was dragged through the water.

The rain kept coming, and Probst and the producers added a twist at the first immunity challenge: an option to give up a chance at immunity for a better shelter. The trick was that only five had to opt out. Whether it was because of the rain or the high improbability of beating Joe at an endurance challenge, every single player except Joe and Keith voted for the new shelter.

The shelter came complete with a fire and platform base. Clearly, it was time for the producers to intervene with the misery, which may have eventually led to medical issues. Also, as Ciera observed, all the rain prevented strategic conversations because everyone was huddled together under the original, crappy shelter.

The new shelter also had, as we discovered later, a hidden immunity idol under its platform—which led Kelley Wentworth’s second incredible acquisition of an idol. The best part of this particular effort was, for me, Kelley’s facial expressions she was making literally behind Abi-Maria’s back, since Abi was lingering and therefore not giving Kelley a chance to crawl underneath the shelter.

While reality show producers can offer a twist, a shelter, and an idol, they cannot control the rain, and it seemed as though this brilliant new shelter arrived just as the rain abated. Alas! Joe’s hair was poofed up at Tribal Council, and by the next episode’s immunity challenge, they were back to sweating in the sun.

Back at the first immunity challenge, Keith gave endurance a good try but Joe won easily, of course, and fist-bumped Probst, because bros. As impressive as it is, Joe’s winning streak has become somewhat boring. Although he is and became a target, he isn’t exactly an underdog fighting for his place in the game.

I’m also not quite sure what to make of his game. He insisted in an interview that he didn’t trust Ciera because “I know she’s a liar,” which is a pretty strong judgement, yet he also refused to sink as low as Abi, who nicknamed Fishbach “poopy pants” because of his stomach problem.

Abi repeatedly calling Stephen that name was a reminder that 1) she’s still there and 2) better players keep leaving. Alas, a smart game involves taking someone who can’t win to the end, and it seems like everyone knows that’s Abi.

Yet they also know how impossible she is to manage. Despite the assurances that she wasn’t being voted out during the second Tribal Council, she was acting as if she wanted to be. She told Spencer, “I’m ready to go home tonight if I have to. But I’m ready to.” Abi! She’s so wonderfully frustrating. How do you play a game of chess when one of the pawns is made of butter and melting?

Perhaps that’s what made her the secondary target for Fishbach’s alliance at the second Tribal Council.

Oh, that second Tribal Council. As Spencer said, “There are so many permutations of what could happen.” For something so complicated, though, it was presented rather cleanly.

Because of Fishbach, Tasha, Jeremy, and Kimmi’s (alas, unfounded) fears that Joe had an idol, they split their votes between Joe and Abi. Had they not split the votes, Joe would have left the game, since Kelley, Abi, Keith, and Spencer’s votes wouldn’t have been enough.

The split, however, left an open door for Kelley’s alliance, which had pulled in Spencer, who voted for Fishbach even though Fishbach trusted him enough to reveal his advantage during a strategy conversation. Fishbach used Joe’s vote to vote for Joe (whoa), but even if he’d also used his own vote to vote for Joe, that wouldn’t have been enough for Joe to exit, thanks to Spencer’s defection.

Once again, the extra vote/stolen extra vote has resulted in a player’s exit, which seems apt punishment for using a game element that’s fundamentally unfair. But Stephen was okay with that.

“Great blindside,” Fishbach said, seemingly amused as he gathered his torch to be snuffed. “That was really awesome.” If even the player who’s being voted out can recognize how great the moment is, you know it’s incredible—and you know that’s Survivor at its best.