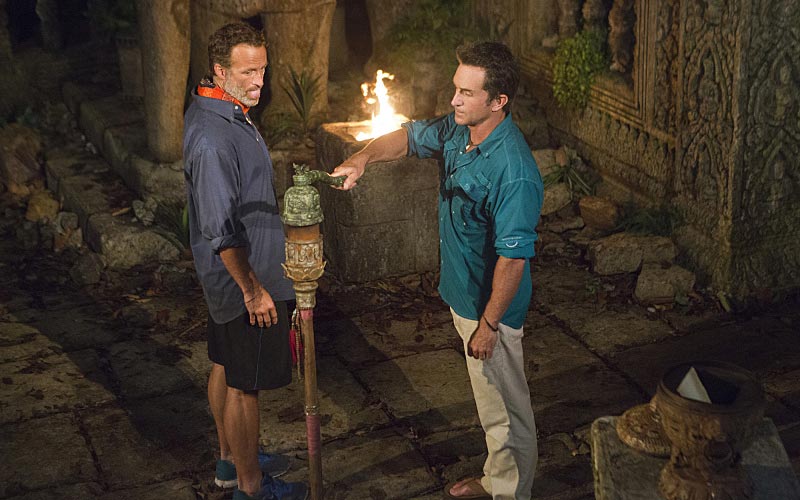 After getting his torch snuffed on Survivor, Andrew Savage has backed away from some of his harsh language. (Photo by Monty Brinton/CBS)

Survivor Cambodia: Second Chance antagonist Andrew Savage has backed away from the comments he made in interviews on the show about his fellow players. This is an impressive display of honest ownership of bad behavior that inspired an aggressive hashtag, #FUAS.

Before he was voted out last week, Savage said, among other things, that Stephen Fishbach is “lacking” in “morals, values, loyalty, dignity, courage,” and called some players’ game play “disgusting.”

Asked if he has regrets, Savage told People:

“Yes. There were a couple of things where I crossed the lines. During one of my first interviews about Fishbach looking for idols, I said he doesn’t have ethics and morals. That’s a stretch. I said that in the heat of moment; I overstepped and I wouldn’t say that normally. Stephen’s a friend of mine. He’s a good guy.

Also, after the second tribe swap, when Woo was blindsided. I gave an interview where there were f-bombs. I wouldn’t do that normally. I was a little embarrassed by that. I’ve watched that scene closely, and I was just venting. And when I was done, I just smiled cheek to cheek. I was thinking, ‘this will never make the episode.’ I just needed to vent. I couldn’t do it in the shelter. But I regret it. I shouldn’t have done it.”

He went further, too, when asked about how he conflated gameplay with people’s personalities.

“That was frustration; it was a total double standard on my part. I was saying that people’s gameplay was disgusting and despicable, but I did the same thing. I blindsided Peih Gee and didn’t say anything to her. Being on Survivor and being sleep deprived and hungry, and uncomfortable and frustrated, it led to a double standard on my part. It was very raw. It’s not disgusting; it’s part of Survivor.”

Again, I’m impressed. This seems genuine, and it’s not just throwaway contrition. By pointing out his own hypocrisy, he’s adding another checkmark in the bad behavior column, but ultimately I think he deserves a lot of credit for owning everything he said.

I, for one, will retire my use of the hashtag.