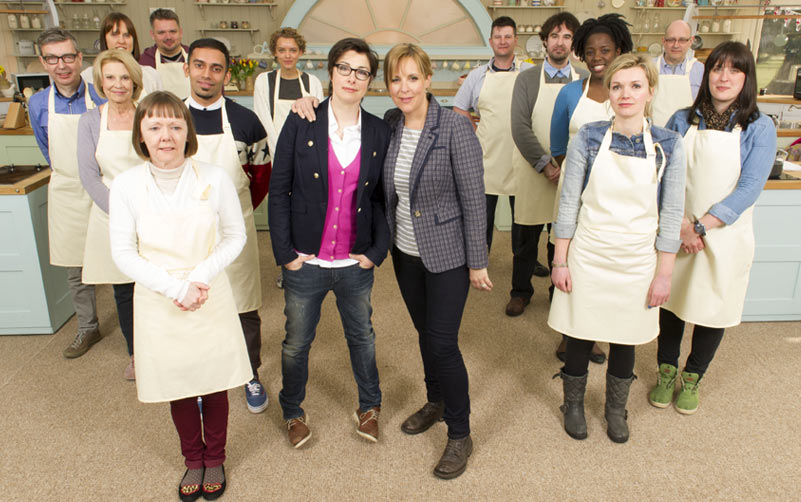 The addictive and delicious The Great British Baking Show is concluding on PBS next week. While this is just the second season to air in the United States, it has captured the hearts and attention of a new audience.

For those of us in the U.S. who’ve only seen two seasons so far, it’s challenging to find information or answers to questions without bumping into results of already-aired seasons of The Great British Bake-Off.

So, I’ve gathered together behind-the-scenes information about the show and how it’s produced, and presented it entirely spoiler-free. However, the sources of the information—always linked and cited, of course, such as these two fascinating behind-the-scenes articles published by The Telegraph and The Guardian)—may reveal winners and other information.

Where did the idea for GBBO come from?

The concept of The Great British Bake-Off actually came from the United States. Yes, the Telegraph reports that executive producer and creator Anna Beattie “came up with the idea after talking to a friend who had seen ‘bake-offs’ in America.” Ironic that those very Pillsbury-sponsored bake-offs are the ones that led the show to change its title for broadcast in the United States.

Beattie started Love Productions with her husband Richard McKerrow (they sold a majority share to Sky in 2014), and license the format around the world. CBS aired a version in 2013, and Love Productions is producing ABC’s holiday baking competition with Mary Berry as a judge.

Where is the show filmed?

Even though every season except the first has taken place in a tent, the filming location has changed regularly:

Has the show’s format changed over its life?

Yes, significantly. During the first UK season, which aired in 2010, the 10 contestants traveled between cities for themed bakes. The tent was introduced in the second series, which also saw the addition of the star baker award.

Filming now takes place over 10 weeks—an extraordinary amount of time compared to typical US reality series—and only on weekends. Contestants stay at a hotel (the judges and hosts are in a different hotel) during the weekends and return home during the week.

How do contestants get selected?

Like any reality series, there’s a lengthy process, which includes an application, phone interviews, an in-person audition and screen test, psychological exams, and more. One contestant said he spent “a couple of thousand pounds to get to this stage—the expense of getting to all the auditions, the ingredients.” He’s referring to practice bakes and the bakes required for an in-person audition; those who are cast have their ingredient expenses covered.

What happens during the bakes?

A lot. First, contestants are shuttled from their hotel to the tent, and like we see on screen, do two different bakes on Saturday and one on Sunday. Like on Trading Spaces, contestants wear the same clothes each day for continuity.

There’s a crew of 50 or so behind the scenes. If a contestant wants to take something out of the oven, they have to let a producer know first so one of the six camera crews can capture it.

While they might spend a lot of time staring into the oven, the contestants “are encouraged to take half-hour breaks when their baking schedule allows,” the Telegraph reports.

The show’s chief home economist Faenia Moore (The Guardian reports her title is “an anachronistic hangover from postwar attempts to bring rigour and respectability to school cookery lessons”), who’s basically in charge of the food producers, observes the contestants and reports back to producers about problems so Mel and Sue can talk with them.

Moore’s three-person team of producers is responsible for all the food and equipment, and they work out of a prep kitchen adjacent to the tent (contestants aren’t allowed in). The team starts acquiring ingredients two days before each episode’s shoot, in part because they have to remove all brand labels.

If the contestants change their recipe or need a new ingredient, the show has someone waiting at a nearby store.

Do the show’s producers try to create drama?

No, or at least, not any more—and what they did do during season one was low-key for a reality series. Host Sue Perkins revealed as part of a profile in The Telegraph that she and Mel actually walked off the set at some point because of producers attempts to milk contestants for drama, which the paper compares to The X Factor. Sue said:

“We felt uncomfortable with it, and we said ‘We don’t think you’ve got the right presenters’. I’m proud that we did that, because what we were saying was ‘Let’s try and do this a different way’—and no one ever cried again. Maybe they cry because their soufflé collapsed, but nobody’s crying because someone’s going ‘Does this mean a lot about your grandmother?’ Many the bakers have sad stories, but guess what? We never touch on any of them.”

Sue says that controversy is “My idea of hell” and added, “A good Bake Off for me is just about cakes and nice people—and that’s a successful show.”

How much practice do the contestants get?

The show makes it clear that contestants have all week to practice their signature bakes and showstopper challenge creations. Their expenses are covered for the supplies they need to buy.

But they actually have even more time than that: Producers identify the 10 signature bakes and showstoppers during pre-production, and before the competition even begins, every contestant has to identify what they’d bake for each one.

Of course, many of them will never bake some of those things, but they know what’s ahead for the entire competition. That’s remarkable, considering how many other cooking competitions rely on surprise to create drama. Here, the only surprise is the technical bake.

Do the contestants get other help?

Yes, though it is limited. Besides practice on two of the three bakes for each episode, food producers will step in with advice or new ingredients if necessary. “We help the bakers to a certain degree. We do show the disasters, but you don’t want to set anyone up for a fall,” Faenia Moore told The Telegraph.

Who eats the bakes after judging ends?

The contestants and the reality show’s crew. Faenia Moore told RadioTimes, “It is really important that the bakers actually have a chance to taste what they have been slaving over for three or four hours. So I put together a basket of all their different bakes so they can taste their own and everyone else’s. Then, in a very orderly fashion, of course, the crew dig in—they really love it when the bakers cook something savoury as there is usually so much sugar around.”

However, one contestant told the Birmingham Mail, “The cameramen literally stand there with forks in their back pockets, waiting to swoop as soon as filming stops. The cakes are meant to be taken to a lunch area where everyone can share them, but they don’t usually get that far because the crew eat them first.”

How fair is the competition?

How do they know each oven will produce the same results? “A dozen Victoria sponge mixes are prepared and placed into each oven at exactly the same time by members of the production crew,” executive producer Anna Beattie revealed.

Why isn’t there product placement?

The show works to minimize how many products are shown, including removing brand labels from ingredients.

That’s because the show airs on the BBC (series one to four on BBC Two, five and six on BBC One), which is a public broadcaster and has rules about product integration.

How much do the judges and hosts earn?

The show has been increasingly popular in the UK, with last year’s season finale being the most-popular broadcast of the year outside of sports. So, its stars’ pay has increased over time, too, though exactly how much they make hasn’t been officially revealed.

The Daily Mail said (citing no sources) that for the series that aired this year in the UK, series 6, Mary Berry and Paul Hollywood each earned £500,000.

In an earlier story, the Daily Mail reported that Sue Perkins and Mel Giedroyc earn “in excess of £100,000 a series,” though the story didn’t specify if that’s for one or both of them.

Where can I watch The Great British Baking Show?

If you missed season one earlier this year, or have missed episodes (why the the schedule changed this season), you can catch up online or on demand.

How to watch all seasons of The Great British Baking Show

series one to four

not the actual show but better than nothing