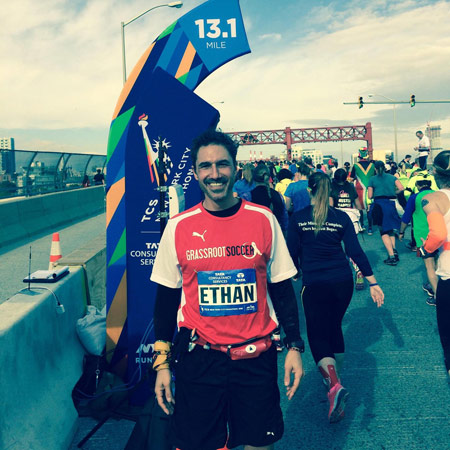 Ethan Zohn halfway through the 2015 New York City marathon, in a photo posted to his Facebook page.

Survivor Africa winner Ethan Zohn turned 42 on Nov. 12, and to celebrate, he’s running two marathons this month and using that to call attention to a fundraiser for his charity, Grassroot Soccer. He’s close to his $42,000 goal, having raised just over $34,000 as of Monday afternoon.

This is quite possibly the most Ethan Zohn thing ever: raising money for charity while running not one but two marathons, and doing that to honor others.

In his explanation of why he’s doing this, Ethan references his past health challenges:

“I turn 42 on November 12th (according to my stem cell docs, I’m really only three and a half…). I want to celebrate the marathon of my life, and honor all the people who got me to this point, by running two birthday month marathons and raising $42,000 for Grassroot Soccer (GRS). Oy veh! […]

This is an opportunity to honor all the folks who helped reassemble my body. My body is bones, flesh and organs, but it’s also my brother Lee’s stem cells, my friend’s platelets, my family’s blood transfusions, my doctor’s chemo and targeted hodgkin’s lymphoma therapy, and most importantly it’s strength and spirit sustained by all the virtual hugs and support of family, friends and fans near and far.”

Donations will actually be matched 1:1 by other donors to Grassroot Soccer, an organization that, as it says, “connects young people with the mentors, information, and health services they need to thrive, and empowers adolescents to make educated choices about pressing health challenges such as HIV & AIDS, sexual health, gender-based violence, and malaria.”

A $10-donation funds one soccer kit; $50 funds an HIV test and a counselor. Learn more here.