Audrey Middleton was on Big Brother 17 for only 14 episodes before being eliminated during the fourth week of game play, but she left a significant mark.

From her candid discussion of gender identity and her transition to her odd behavior—culminating in a meme-worthy blanket and sunglasses outfit—she was a stand-out character.

So what is it like now, about four months after her eviction, to look back on that experience? And what did she expect going into it?

I talked to her yesterday, at Stetson University, where she was appearing as part of Transgender Awareness Week (and where I teach). “I’m still in this transition phase from reality TV to back to real life,” she said. “I’m having a blast.”

Audrey on her game play and this season’s twist

“It’s really authentic,” Audrey said of Big Brother. “Sometimes as a viewer, you’re like, Oh, they’re rigging that for that person. But a lot of it is dumb luck. … It is completely organic.”

Also authentic was Audrey’s behavior in the house and her game play, which started strong and then completely imploded. “I was a fan of the show but I never watched the feeds, and I believe in my heart that if I watched the feeds I would have had a different approach. But I was so excited to play that I got right to business,” she told me.

Specifically, she said, “I would have chilled out. The first week, before the big blow-up in the have-not room, I got along with everybody. I was really well-liked; I had a relationship with everyone. I had one-on-ones with everyone; my social game was on point.” Audrey said other houseguests told her things such as, “You are someone I would want to be aligned with, and I don’t see people targeting you right away. I kind of took it a little too far.”

As to BB17’s failed twist, Audrey wished it lasted longer. “The week I got eliminated, I was like, Where’s my takeover? I was a little disappointed that it went away, because I actually like that better than Battle of the Block,” she said. “It was fun to see a celebrity…and there are all these random twists happening. It’s a lot to manage, it’s a lot to keep up with, but from a player perspective, I enjoyed it. I don’t know if I would have liked it so much as a viewer.”

What viewers enjoyed, especially on the live feeds, was her unexpected behavior. “I put a blanket on my head—I think it’s hilarious now,” Audrey told me. “I’m so glad that I did it. I sang songs in the have-not room, I randomly dressed up like one of the twins and popped out of the storage rooms. I did things that were unpredictable. Another reason why I love these shows is because I am entertained by human behavior and how people respond to things. I love being the one who says the random dick joke in a really quiet room or makes people feel a little uncomfortable, because I like to see how they respond to that. I respond well to that. It was fun to do and I’m glad I did it.”

Leaving the Big Brother house after being vulnerable

When Audrey was voted out, she said, “I had the expectation that I’d be more phased, but I also didn’t have an expectation because I’d never done anything like this before.” But there’s a good reason for her attitude: “When you make yourself completely vulnerable on a platform 24/7, you have a limited shock factor. You kind of give all your Fs up.”

“My personal experience in the house, I kind of knew how everybody felt about me, unfortunately, so I wasn’t going to be surprised. I already had some idea, plus the walls are really thin and you hear stuff.” (She wasn’t exaggerating, saying that houseguests hear, “like, everything. No drywall at all whatsoever in that whole soundstudio. It’s intense: You have to be extra secretive; it’s very hard to do.”)

As to Big Brother‘s audience or other people, she didn’t care—though she knew that being on national television was like being “on a platter for people to stab at you.”

“When I signed up for the show, I was like, Well, I’m making myself vulnerable to the whole world. And I’m coming out on this platform and I don’t get to give craps anymore,” Audrey told me.

“So what people say about me, it doesn’t matter. I’m not going to look it up. I wasn’t as interested; I didn’t care. At this point, I understand that people are going to judge you whether you’re on a platform or not. Now you’re just under a magnifying glass and it just happens a little more exclusively and intensely.” 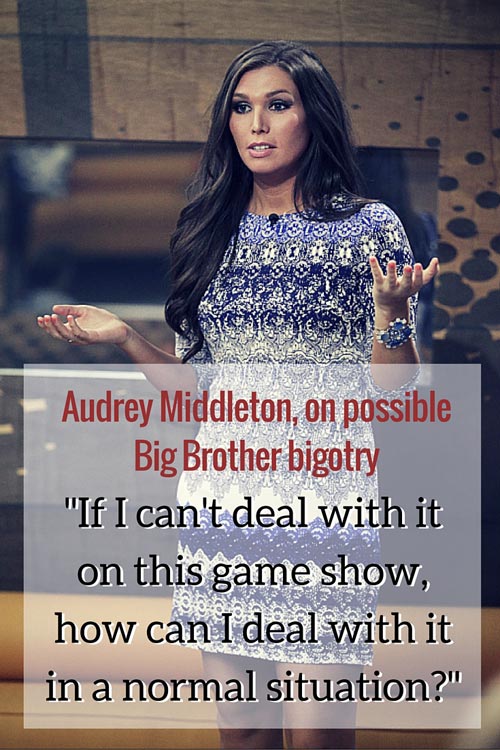 Audrey Middleton has watched Big Brother since season six, and said she was well-aware of the show’s recent past history of houseguest bigotry. Not only did that not deter her from being open about her life, but her take on the possibility of more bigotry surprised and impressed me.

The plan going into the house was to reveal her transition the first day, when the houseguests introduced themselves. But in the middle of interviews with a series of press outlets while the cast was still sequestered, TMZ reported that she would be the show’s first transgender houseguest. Audrey told me, “I don’t know how they found out” and said that the show’s producers, who “totally were cool with everything,” asked her if she wanted to continue interviews that day. She declined, because she still wanted to come out on the show itself and didn’t want to have to avoid questions the press would ask.

“I didn’t want it to be limited to just a few soundbites. I wanted to have the opportunity to really share my story, educate these houseguests the best that I could that first week—which wasn’t on the feeds, but there were some feed moments that did air,” she said.

Audrey was warmly embraced by the cast. “I didn’t know what to expect. It was a relief when everyone was super-encouraging. Caitlyn Jenner had really paved a good path for someone like me to follow in her footsteps and step on a big platform. She had such a warm response through her transition—for the most part. So it was a little bit surprising, and a relief,” she told me.

I asked if the producers said anything to her about casting more accepting people this season. “They didn’t at all whatsoever,” she said. “They can’t, because that wouldn’t be fair. You have that expectation in the back of your head, but that’s just real life. That happens anywhere you go. So why would this situation be any different? I mean, I have the expectations that the producers are putting on a show, they want the most interesting results. I’ve seen the show; they’re going choose people who have radical personality types, because it’s about human behavior and how people respond to that environment and each other.”

“So yeah, I expected it, but I didn’t fear it or have any concerns because that’s real life,” she added. “If I can’t deal with it on this game show, how can I deal with it in a normal situation?”

Being authentic in a world full of judgement

While Audrey didn’t search for what people were saying, people did reach out to her, and she appreciates those connections. “I received a lot of e-mails and letters, and people reached out to me through social media giving me reinforcing messages—how I’ve touched them, and how I’ve helped them,” she said. “That’s been really amazing; that’s one of the most awesome things that I was able to discover after all of this.”

Those messages aren’t just from people working through their own gender identity, though there are some people who are, but also people who are coming out as gay, or just “people who just also didn’t have much confidence themselves,” Audrey said. “I exemplified the courage to come out, but I also exemplified a special kind of confidence to go on a platform and really make yourself absolutely exposed. For the average human, we don’t do that very often. We’re a very protected and guarded species.”

Without naming names, Audrey said she’s been surprised to meet reality TV stars who were unlike their television personas. “How did you contain this part of your personality?” she wondered. “They set themselves up to be these characters.”

She’s continuing to be vulnerable now in front of audiences where she shares her story and talks candidly about her experiences. “I’m kind of an open book,” she told me, saying that she preferred to engage in conversation with groups rather than lecture.

But while Audrey encourages questions from audiences, she’s benefitted from finding answers on her own.

“I appreciate people seeking guidance, but the truth is, we seek these answers from people and experiences because that’s how we’re conditioned to be. We’re not conditioned to explore things ourselves, figure things out on our own,” Audrey told me. “That’s how I am where I am right now. I am who I am right now because I didn’t go to anyone and say, What should I believe? What should I do after school? I did what felt good to me. I made mistakes and I learned from them. It’s really important, at least for me, to be able to explore my own free will because that’s the only way I’m ever going to know myself inside out.”