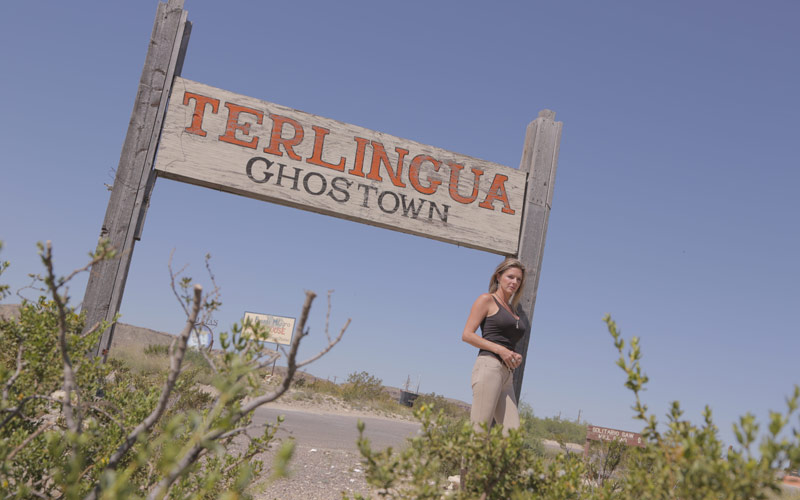 Ronda Haberer, one of the residents of Terlingua, Texas, that Badlands, Texas, follows. (Photo by Kenneth Kayne/Original Productions)

Terlingua, Texas, is 200 miles from “a major anything,” one person says during the first episode of National Geographic’s Badlands, Texas. Like so many other remote locations, it is now, ironically enough, the subject of a reality TV series.

I’ve only seen episode one of the show, which has received practically no promotion, but what I’ve seen is very compelling both aesthetically and in terms of its content. Produced by Original Productions, it gives people time to talk and gives the landscape time to settle in to our consciousness. Despite some opportunities, it does not make fun of people nor does it seem set-up and fake like Duck Dynasty.

Why even make that connection? Because some residents of Terlingua—those who did not let cameras follow them—are skeptical, telling the San Antonio Express News last spring that they feared the series would be a “sideshow” that exploits a tragedy that was covered heavily in the media earlier this year and last.

A NatGeo spokesperson did promise it was “documentary vérité” series. While there are clearly some set-up establishing shots—a reporter observed someone positioning and re-positioning a rattlesnake—the first hour is largely first-person commentary and sweeping shots of West Texas, which looks both gorgeous and haunting.

A mystery in Badlands, Texas

The artistry is present and foreground, but it may be obscuring a very narrow focus—or, as one resident put it, “a false premise.” For example, if Terlingua actually is somewhat of a tourist destination, that’s not at all illustrated in episode one, which makes it seem desolate.

There’s a tonal similarity to the outstanding series The Last Alaskans—Badlands, Texas, isn’t as quiet or contemplative, but there are lots of lingering shots of landscapes, and character development via monologues. Some of those are reflective, one man is a conspiracy theorist. They talk and there aren’t a lot of quick cuts.

As a result, the first hour builds slowly. It’s actually very slow, though each act ends with a little bit more information about where this is going. (Googling will tell you exactly where this is going, of course, but like The Jinx, one may prefer to let the story unfold on television first and read more later.)

Following each commercial break, though, Badlands, Texas, resets to more character development. After this happens a few times, it gets repetitive, obvious, and even annoying. But the other material was compelling enough to keep me mostly engaged, and hopefully that is not the structure every episode will follow.

Throughout the first hour, a lot of the shots have the foreground and background out of focus, and that’s how the series feels in this first episode: there’s some clarity but a lot is obscured. I’m interested to see what’s eventually revealed.