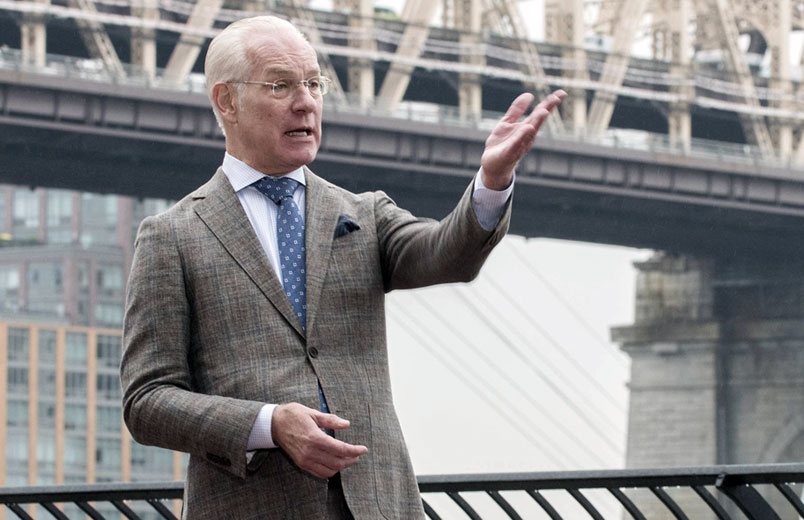 Project Runway co-host and mentor Tim Gunn, who's been heavily criticized over the way he dealt with Swapnil. (Photo by Barbara Nitke/Lifetime)

Sometimes on the Internet—a very nice place that was ruined once humans started using it—people accuse me of bias in my television criticism. Considering that criticism is writing designed to share my opinion, analysis, and preferences, this kind of accusation makes me laugh, and also makes my face turn all Madeline Kahn in Clue.

What these fine folks mean actually mean by “bias” is something like, I don’t agree with you but don’t want to actually make an argument and discuss because that’d make my thinker hurt. They want opinions that concur with their own and want to dismiss everything else. I understand that, but I also engage in television criticism because I find discussions about what we’re watching stimulating; disagreement helps me understand others’ perspectives and my own.

So last week, after Project Runway, when those same fine folks accused me of bias in my recap of Project Runway, and also accused Tim Gunn of the same, I laughed it off, after I doused the flames on the side of my face.

Yet this time, there was more persistence to this language, and it was cropping up all over: in comments, on social media, in e-mail. People were, it seemed, very angry at Tim Gunn for failing to do his job, and they were very angry at anyone who criticized Swapnil’s behavior.

At first, I dismissed it, for the reasons cited above. Then a person named Patti wrote this to me:

“That anyone calling themselves a mentor would indulge in such disrespectful behavior as that of Tim Gunn in his expletive-ridden tirade at a mentee in front of same’s competitors is ridiculous and insulting to teachers and mentors everywhere. In fact, this would make a good teaching model for how not to be a mentor and then have students discuss and suggest how the situation might have been handled better. I’ve never thought Tim Gunn’s—or most of the judging, as well, because it is so subjective—added much to the show, but it’s possible that Gunn’s outburst helped to produce the ugliest clothing I’ve ever seen on Project Runway, and I’ve watched for several seasons. Tim Gunn owes viewers and all of last week’s contestants a huge apology as does Heidi Klum for thinking this made for good TV. It didn’t in my opinion.”

Ah! So interesting and thoughtful. This gets at something interesting to think about and consider, including the role of a teacher in this kind of environment. This is the kind of discussion we should be having. (I’d have written back to Patti, but she wrote from a non-working e-mail address.)

First, how fascinating that the subjective parts of the show, the centerpieces of competitive reality TV, are uninteresting to a viewer. While I often find the judging to be frustrating, confused, or weak—especially since Michael Kors left—that part of each episode is interesting to me as an artist/writer, critic, and teacher. It gives the contestants a chance to discuss their choices, defending them or explaining their thought processes. The judging allows us to see how professionals evaluate others’ craft.

As to Tim’s role, I actually find the workroom segments with Tim’s critique to be among the more watchable parts.  He broke out as a television character not because he robotically evaluated the contestants’ work, but because he was compassionate and passionate. Those who think he has not been frustrated with contestants in the past are forgetting the past. Remember this? Or this? And those who think he hasn’t gotten defensive over the show before are also forgetting things, like the season 12 reunion.

Was Tim Gunn a good mentor with Swapnil?

So, let’s not pretend Tim Gunn is Mary Poppins. He’s not, thankfully.

Swapnil clearly tried Tim’s patience. What we saw repeatedly all season long was Swapnil wasting away his time, smoking or talking or just standing there, and then banging something out. This is, of course, the product of editing and what someone has decided we should see. Whether or not it perfectly reflects reality is something else, but what was absolutely, unequivocally clear from Tim’s response was that Swapnil’s behavior affected him.

At the start of the season, Swapnil’s amusing/frustrating attitude worked. Last week, it did not. That brings us to his demanding model, who happened to be a member of the crew. Let’s assume for a moment that the conspiracy theory is accurate, that she was placed there to be as big of a pain in the Zac Posen as possible.

That he didn’t even have something for her to try on when every other contestant did made an clear argument that he was once again wasting his time and his opportunity to produce something worthwhile. Given a challenge, Swapnil fell on his face. She is not at all the first difficult model we’ve seen on the show, and he also wasn’t, as far as we saw, giving her at all what she was asking for.

To come back to Patti’s argument: I actually think that it’s perfectly acceptable for a teacher to get upset, especially at untapped potential. Yes, I am biased here (oh!) because I teach. I also have many close friends who teach, both at the collegiate level and in public schools, where teachers are asked not only to constantly pivot to the whims of a political educational system, but also are faced daily with instructing and evaluating 150 or 180 human teenagers full of hormones, a society that presents them with no actual consequences for their failures, and developing brains that cannot recognize the value of anything to their future, never mind a book. They deal with that because they care, which provides an exoskeleton against the bullshit.

That said, Tim Gunn’s mentees are not petulant or apathetic teenagers. They are adults who’ve been chosen to compete on a reality show based on their talent and personalities. So, while his language, approach, and/or passion might not have made sense in a middle school classroom, they were certainly fine in the workroom. Even when he yelled, “What is the fucking point?” at Swapnil, he was trying to help, to ignite something, anything from a designer who was extinguishing himself.

Also, his frustration with this group of contestants mirrors my own, because what they’ve produced this season so far has been not great. Tim may have responded emotionally to the designers because of his relationship to the crew members, but he also may have responded that way because the designers are producing shit week after week. He knows they can do better, and he’s trying to help, even when he’s infuriated. In that situation, I’d want someone to push me, even if it angered me in the moment.

If Tim Gunn crossed over into Gordon Ramsay territory, which is 95 percent yelling and five percent asking questions and ignoring the answers so he can yell more, I would be the first person to express dismay. In the past, I’ve expressed dismay when Tim went the opposite direction, and was, at least on screen, just a “make it work!” robot. (Recall that Gordon Ramsay used to be an excellent teacher and mentor, back during the Ramsay’s Kitchen Nightmares days and before he was infected with Foxness.)

But that’s not what has happened. Also, it is not Tim’s role to be impartial. It’s his job to care and be invested, and we shouldn’t be surprised when that comes with occasional emotional responses—especially when they’re in response to frustration in human form.