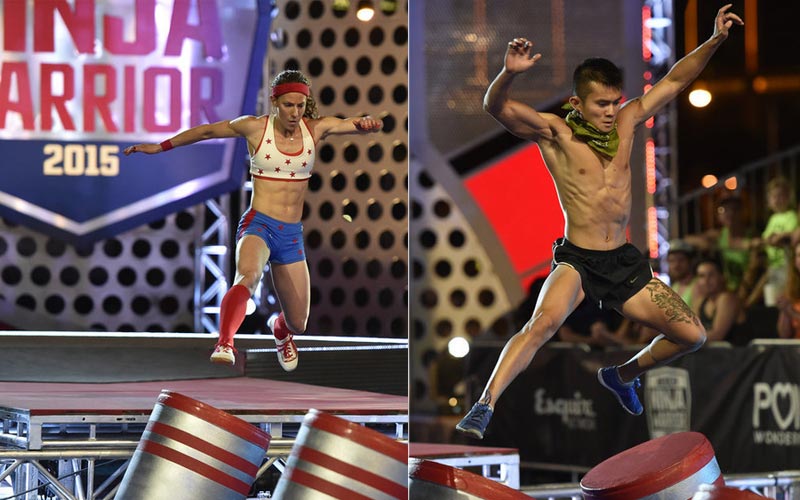 Rose Wetzel (left) and Van Tran during the Las Vegas Finals of American Nina Warrior, which is getting a spin-off series. (Photos by David Becker/NBC)

The success of American Ninja Warrior has led Esquire to order a spin-off series, Team Ninja Warrior, a competition that will send teams of three through a new kind of obstacle course.

The NBC series’ hosts, Akbar Gbajabiamila and Matt Iseman, will also host the spin-off, which will debut early next year.

A total of 24 three-person all-star teams will compete in the new series, and race head-to-head on a new obstacle course.

It will accommodate two people at once and feature some familiar obstacles that have been modified, such as the “Dual Warped Wall.” Esquire’s press release says that “teams with the fastest cumulative times in each episode will advance to the finale where only one team will be crowned Team Ninja Warrior champions.”

Altogether, this seems like a terrific idea, capitalizing on the show’s popularity and the popularity of some of its contestants, who will get far more screen and time in this format.

ANW contestants who will return for Team Ninja Warrior

Besides noting that the original series “has been a highly successful series for both Esquire Network and NBC,” Esquire announced some of the contestants who will return:

“The teams will feature top performers from previous seasons of American Ninja Warrior including: Geoff Britten, the first person to ever defeat the course; Brent Steffensen, a six year Ninja veteran, “The Mighty” Kacy Catanzaro, the first woman to reach the American Ninja Warrior finals, who became a social media phenomenon with her finals run being viewed over 9 million times, and other top contestants such as, Flip Rodriguez, Brian Arnold, Joe Moravsky, Jessie Graff, Kevin Bull and Lance Pekus.”

The new series will be produced by the same company, A. Smith & Co. Productions.

In the press release, Esquire EVP Matt Hanna said, “We’ve assembled the top competitors who dominated past seasons, constructed a course with the most unforgiving obstacles, and are presenting a new dual run format that is certain to deliver the same addictive, awe-inspiring reactions as the original American Ninja Warrior.”