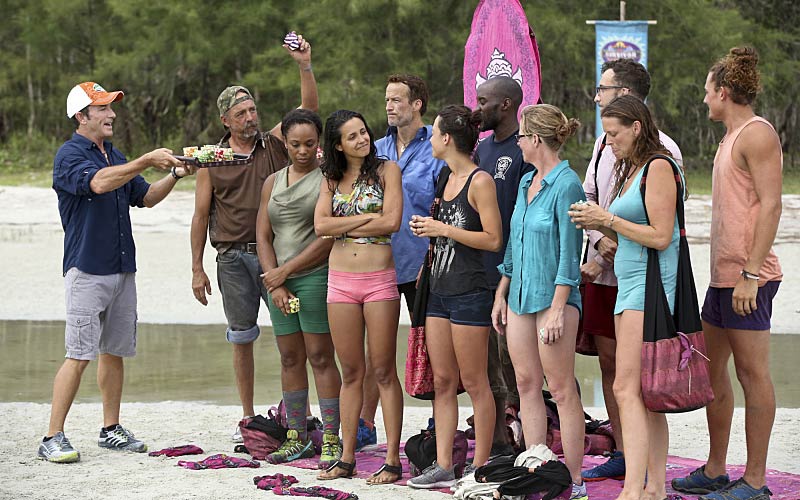 The disorientation felt by Survivor players after they’d gotten comfortable—or even comfortable in their ostracized—is something I experienced when watching tonight’s episode. In fact, I felt a little like Keith trying to get into a hammock: I was having a good time but wasn’t sure I’d gotten the hang of this thing quite yet.

And then came the vote.

Every tribe ended up with four people from one tribe and two from another. Though that looked bad for the twosomes, and led to moments like Kelley illustrating how she was kicking Terry Dietz under the bus,  it looked especially bad for Jeff Probst bro and stand-in Andrew Savage. Yet by the end of the episode, he’d completely swung the game in his favor.

Yes, the new Angkor tribe is such an amusing disaster that a four-person alliance left the vote up to the two-person minority. That’s especially insane since it meant one of them, Abi, Peih Gee, Woo, or, Jeff Varner, would be voted out. And really, despite Varner’s odd behavior at Tribal, it came down to the childish fight between Peih Gee and Abi. You can blame this on Abi for deciding to flip—and she announced it directly to Woo and Peih Gee—and thus forcing everyone’s hand, but you can also blame the others for failing to manage Abi, who should be an asset, and by that I mean, a lump of a player to sit next to at the final Tribal Council.

Voting out Peih Gee makes some sense beyond the Abi stuff, but it still came across like a very first-episode kind of vote, I suppose this was a reset back to day one for most everyone. Except Woo, who sadly responds as if he’s still on the plane on the way to the location: Wait, we started playing?

Fresh starts for Survivors who need another second chance

Spencer was the poster boy for the reset, and told the camera, “I’m trying something new on this tribe: I’m trying to have feelings.” That was both sincere and amusing, which is also how I’d describe the one effort of his the editors included: his ironic attempt to connect emotionally with Jeremy by telling Jeremy about his failure to connect emotionally (with his new girlfriend, who’d told him “I love you” but who has yet to hear it back from Spencer).

Meanwhile, everyone’s favorite crazy threat/underdog Stephen Fishbach has escaped from Camp Macho, though he hasn’t yet escaped the editors’ hammering him for being so awkward. Cut from him saying “it’s so liberating not to be in camp macho; I couldn’t be happier” to him failing to cut a coconut open with a machete, hacking at it as if it was a balloon and the machete was a feather.

It was the challenge, however, that ramped everything up to 10. As physical as it was, I didn’t really care which tribe won or lost; I have not yet grown attached to one over the other. (Jeff Probst’s attempt to infuse it with second chance story—it was a repeat of one from a previous season, and each tribe had one person from that season—did not succeed, but then, I respond to all of his attempts to tell, not show, as if I’m out for a run and he pulls up alongside me in a white van and tries to convince me to climb in.

But really, the challenge was just a backdrop for the episode’s two biggest moments, one of which bled over into Tribal Council.

First, Jeremy found a clue to the challenge idol at camp, and learned it was hidden on the back of a crate. Correction: taped to a crate in such a way that anyone actually looking at it would think, Why is this hidden immunity idol taped to the side of this crate? No one noticed, though, and Jeremy got it. He was not nearly as slick as Kelley was, kneeling down awkwardly next to the crate, but the cover worked and he shoved the idol into his pants, and now there are two idols in the game.

But I have saved the best moment for last, the moment that gave the episode its title. It started when, as the challenge ended and his tribe lost, Jeff Varner mouthed something to Kelly Wiglesworth, who’s now on a different tribe. I checked closed captioning and watched it several times, but still have no idea what he said. But it was the fact that he said anything that caused Tasha to notice and jump in front of him, raising up her hands and declaring:

WE GOT A RAT #Survivor pic.twitter.com/WyeKGxPjAF

Tasha took that as a major betrayal. Doing what he does best, Probst seized on this opportunity and basically spawned a mini-Tribal Council worth of discussion. “We’re trying to bond as a tribe. That doesn’t send a good message,” Tasha said. Then, for some reason, Varner started confessing all the deals he’d made, and then Woo felt betrayed, and everything fell apart.

At Tribal Council later, Probst brought it up by saying “a meltdown occurred,” to which Varner responded perfectly, “Hi.” Varner called it “an emotional meltdown that I don’t recall,” basically arguing that fatigue and other factors led him to totally forget what happened. Apparently, his tribemates forgot too. That moment was basically him waving a giant flag and saying, I’m an easy target! A strategic threat and someone who’s prone to outbursts and open communication with people on other tribes!

And his tribe voted out Peih Gee. To be charitable, that was maybe Savage and Tasha’s best move, aligning with two of the four to vote out Peih Gee instead of making a riskier play to target Varner. Yet I still can’t believe that 1) a four-person alliance dissolved itself for no real reason, and 2) Varner’s outburst had no immediate impact at all. If Jeff Varner can make it through that without having any repercussions, I can’t wait to see what he does next—and see who, besides the rain and sky, he gives the finger to.