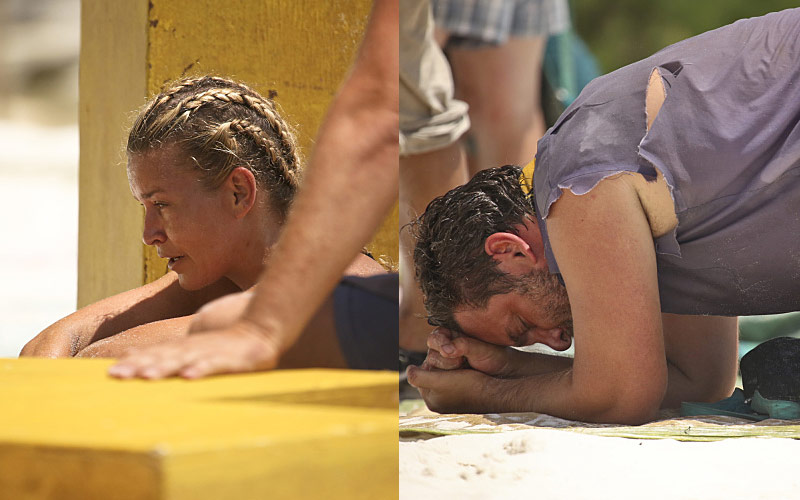 Some episodes of Survivor are basically perfect, and this fourth episode of Survivor Cambodia: Second Chance, was one of those.

Act after act, moment after moment, everything worked: The end of the reward challenge. A dejected tribe being reenergized and then flaming out. A classic immunity challenge that tests tribal communication and teamwork but is full of comedy and pain. Kass and her idol/present. Moments such as Abi telling Woo, “Make sure you don’t write ‘Abi'” as he went to vote, or Jeff Varner kissing Abi-Maria while saying, “You little bitch” as he exited. The BABY MONKEY OMG.

Sure, there have been episodes with much more high-level strategy, or more intensely dramatic moments. But as a whole, it came together. There’s been some uneven editing and narrative this season, but this episode was the opposite. The result may have been a little surprising, but the lead-up to Tribal Council and the discussion both fleshed out the options well enough that it didn’t feel like earlier episodes this season, where there was very little foundation for the outcome.

Even the decisions I would quibble with, such as finally having a reward challenge and then only allowing one person to participate, paid off spectacularly well. That challenge—let’s all eye roll together: the Hero Challenge—with an incredible come-from-behind finish for Andrew Savage. You couldn’t have scripted a better arc to that challenge, with him catching up and then being overtaken by Terry Dietz in the last moments as they panted their way up the beach. Then, after Terry’s bag missed the net, Savage used what appeared to be the very last bit of energy he had to launch his bag, and it gracefully, as if in slow motion, flew up and landed, landing his tribe a much-needed reward.

And then, oh! The turn. His fueled-up and energized tribe was ahead at the immunity challenge but went down in self-defeat. Jeff Probst even mocked his boo, saying Angkor looked “almost as if they’re just waiting for Ta Keo to win so we can be done.” Their giant puzzle mostly sat undone, like the tribe itself.

Chaos Kass blindsides Kelley and us

If there isn’t a merge soon and their members reabsorbed into other alliances, Angkor is probably going to defeat themselves—though you could argue that the tribe swap and starting from zero at a crap beach didn’t help.

We saw very little of other tribes, and some people continue to stay in the background, though Monica reemerged from the shadows for a brief conversation and a reminder that she is also on the cast. And we heard Jeremy say he wanted to be Stephen’s JT, though notably we didn’t actually see them discuss any kind of alliance.

The most significant non-Angkor tribe scene was with Kass, who told us that, in order to improve her game, she read Dale Carnegie’s How to Win Friends and Influence People. She summarized its lessons as “act as sincere as you can; sympathize with people.”

The editing cut between her describing her new strategy and footage of her being sneaky while everyone else was sleeping, doing things like cutting beads off a torch. Sitting in the sand, working on what looked like a fake idol, she had an opportunity to demonstrate her new social skills when Kelley approached, and instead abruptly said, “No, go the other way.”

This editing totally worked on me; I couldn’t believe she was being so obvious and oblivious. And then: She handed Kelley a small box, one of the ones that held the merged tribe buffs, and said happy birthday. She’d made a “good luck charm” for Kelley, who confessed, “I thought you were making a fake idol.”

Again, flawless editing and narrative in that whole scene. It was by far my favorite moment (as I discussed during the Absolutely Unofficial Not CBS Survivor After Show, which you can watch below).

Blindfolded, banged up, and defeated

The episode was a string of satisfying moments like this. Kass went on to be the caller during the classic Survivor blindfolded/banged up challenge, and  Judging by his tribe getting their pieces first, Jeff Varner was the most effective caller, but Kass was by far the most entertaining.

“KEEEEEEEETTTH DOOOOOP IT,” she screamed at him, and even though he was about 14 inches away, he still couldn’t hear. At another point, when a tribemate asked for directions, she said, “I’m yelling at someone else.” During all this, as people got whacked, smashed, and jabbed by giant puzzle pieces, Probst walked around and babbled. I really wanted Kass to yell at him, too: JEEEEEEEFF. SHUUUUUUUUUT UUUUUUUUP.”

It was a great episode even though it meant the loss of one of the best characters, Jeff Varner. I’ve saved this for last because I don’t really want to admit he’s gone yet. I’m comforted knowing that he will be back—even for a relatively early boot, he had a significant impact and proved that he’s worthy of returning.

Sure, his game was imperfect, and his fate in the game was pretty assured after his challenge meltdown last week. The only obstacle to his exit seemed to be Abi, who was fixated on Woo because he’d voted for her, though in fairness she probably would have tried to vote out anything that slighted her, like, say, a soft patch of sand that she stumbled over.

Clearly, the tribe didn’t need her vote to vote out Varner, but I think they did need to manage Abi so that she didn’t feel betrayed/blindsided when they did. There didn’t seem to really be an option, because Varner is clearly more of a strategic threat than Woo, who often seems surprised that they’re even at Tribal Council. Wait, we’re voting? I thought we were just here for bedtime stories from Jeff Probst.

Joking aside, Woo did give a remarkably on-point argument as to why he should stay—Did he actually think he was vulnerable, or was he just playing to make it seem like Abi was in control?—and Varner did, too. They helped draw the episode’s threads into a succinct bow.

Varner’s argument may not have been enough to change the inevitable, but it was enough to cap a perfect episode of Survivor. And Jeff Varner’s consolation prize is knowing just how much he contributed to this season so far, and how very likely it will be that he’ll return to play this game again.