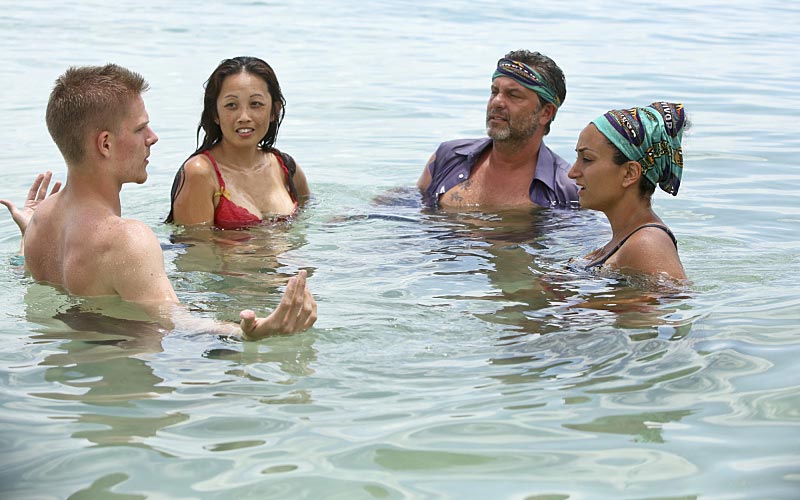 Sometimes on Survivor, the best, most entertaining, most strategic thing happens, and it’s still a tiny bit disappointing. That’s how I felt about the rather incredible swing from last week to this week.

The editing gives Jeff Varner a lot of credit for the major shift that turned members of episode one’s alliance into its targets. And Varner even framed his switch last week as a lesson for his alliance that they need to play. I’m not quite sure if turning on your own alliance and lowering its numbers is the best way to make an argument, so I think that might be a slight inflation of what happened. But the end product is one I’m on board with: Varner’s move freaked out the alleged old-school players and they re-joined with him to target two new-school players, Shirin and Spencer.

Oh, double S: I wanted both of them to go far in the game, because I like them as people, players, and characters.

Yet I completely understand why Spencer and Shirin were targeted. Not only are they smart and strong players, but they were a visible pair and that’s a clear threat. So, as much as I loved Jeff Varner swinging effortlessly back over to those who were caught off guard last week and switching the game up entirely (and gathering up Abi: “I like your little moments. They turn me on.”), it was disappointing to see one of them go.

Despite my disappointment, all of this made for an incredibly strong episode.

Spencer’s devastation—actual tears—at having to vote out Shirin was unexpected. (The preview offered a bit of hope, as he may just have brand-new life in the game with the three-tribe switch next week, which I’m very much looking forward to.) Clearly, they both knew what was coming with their votes for each other, a sad end to that alliance.

That said, there was some real bullshit editing when Abi supposedly tells Shirin that the alliance is targeting her and Spencer. During a conversation that seems mostly about Abi’s hurt feelings, Abi said, “They want to vote you and Spencer off.” Not only did that piece of audio seem to not come from that moment, it also seemed like a frankenbyte, a sentence pieced together from other sentences. We did not actually see Abi saying it (the view was of the back of her head) and Shirin’s response to the oddly stilted and choppy sentence was not what you would expect: “Are we still in this together?”

Again, because Shirin and Spencer knew what was up by the time Tribal Council rolled around, this didn’t seem like the most manipulative edit, just an illustrative shortcut, but it was such a bad hack job. I expect more from Survivor, and definitely expect them to have enough integrity not to screw with audio to create moments that may not have actually occured.

During that conversation, Shirin apologized to Abi: “I’m sorry I didn’t stand up for you.” The events that led to that moment became a major issue at Tribal Council, where Jeff Probst made me want to go Abi with his attempt to construct second chance storylines.

Primarily, I object to his argument that Abi feeling alone and being comforted by Terry was equivalent to Shirin’s experience of having a verbal assault finally interrupted by Mike. You may recall that Shirin, a survivor of domestic violence, was repeatedly verbally attacked and harassed while the entire tribe—except, eventually, Mike—did absolutely nothing.

On this week’s episode, in a wonderful moment, Abi materialized from the darkness to interrupt Peih Gee and Shirin, who were talking about Abi. I understand that Abi felt hurt and alone. But being completely ignored while someone is verbally assaulting you is not the same as feeling excluded. Abi wasn’t “rescued,” as she said, nor was she attacked; she was comforted after she heard conversation that hurt her feelings.

Thus, Probst saying this was the same thing as last season was, at best, a massive stretch. It felt to me like Jeff Probst was saying to a survivor of a tsunami, “Don’t you understand how what happened to you is the exact same thing as what happened to her? She was walking on the beach and a wave splashed her and her shorts kinda got wet. It’s uncanny! What a parallel! Oh boy do we have a storyline now!”

Again, Shirin did apologize to Abi, and agreed that her interaction with Abi was not ideal for the game or even nice. But it was not the same as last season.

What’s most grating about Probst creating story here is that the actual story is interesting enough without this phony connection to previous seasons, this attempt to create hypocrisy where there was none. I think it’s a much more interesting story that Abi is openly annoying everyone—well, except Jeff Varner and his stimulated parts—yet it’s Shirin and Spencer who are targeted. It’s a much more interesting story that two members of the dominant alliance this week were suddenly on the bottom.

It was en episode of disproportionate responses. In an attempt to not be seen as a threat, Joe tried to make himself into an asset. Besides teaching yoga in his fetching underwear, we saw him catching fish, assembling the Swiss Family Hammock House, serving as an on-call masseuse, and doing everyone’s taxes on their prize money. Okay, not that last two, but he was going so far out of his way to not stand out that others noticed.

Elsewhere, Andrew Savage ripped Stephen Fishbach, which was quite the overreaction. It seemed to me like Savage was looking for the tiniest moment to turn Stephen into the Target logo, and he jumped on the smallest thing, which was when Stephen asked if Jeremy was off looking for idols.

Actually, Jeremy was off thinking about Val, his pregnant wife, because he’d been emotionally moved by Savage’s story of meeting his wife. Clearly, Savage was missing his wife, but I actually didn’t find the story to be touching because his demeanor throughout the telling of the story was very somber and even sad. I was bracing myself for a very tragic end.

Thankfully, it had a happy ending, and prompted Kass to tear up and reflect on how her last group of tribemates “were horrible” but this group is different: “we’re real people and I’m gonna be a real person throughout this.”

Well, real people except for Stephen Fishbach, who Savage told us is terrible because he’s “playing the game 24/7” (wait: that’s a bad thing?) and, I am not making this up, Stephen is “lacking” in “morals, values, loyalty, dignity, courage.” Savage might as well have added: “And also he has no friends, humanity, gravitational pull, or reason for consuming oxygen.” Again, I think Savage’s response to his tribemates makes sense—turn Fishbach into a target to deflect the fact that Savage should be a target—but there’s no reason he had to draw those kinds of insane conclusions in an interview.

Thanks to moments like this, for an episode that didn’t have a reward challenge, it really moved, even though several people completely evaporated, including Kelly Wiglesworth and Woo.The immunity challenge was tense and physically brutal, with quite the ending, as Ta Keo came from behind to think they’d won it all, but no, they’d just been fooled by another diabolical Survivor puzzle. It was a fitting turn in an episode with many unexpected switch-ups, and next weeks tribe switch will, I hope, keep that momentum going.