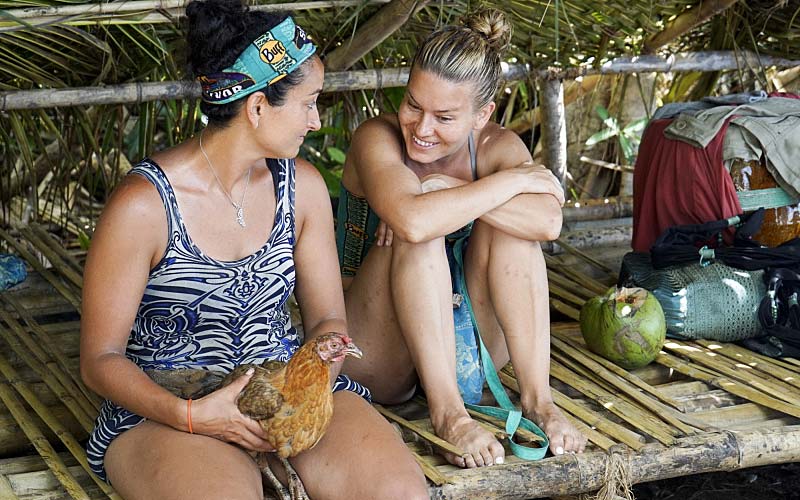 The second episode of Survivor Cambodia Second Chance was a terrific hour of television, with entertaining twists and dramatic moments. But it left out a crazy moment and also completely misrepresented the actual events that led to Shirin’s exit. Shirin says she was voted out ultimately because she tried to protect her alliance, which included Abi.

“… I got sent home because I got caught red-handed coming for Varner. He told me he wanted to get rid of Spencer after we got rid of Vytas. And everybody was pretty sick of living with Abi, so everybody else wanted her. So, all of the sudden the two people we’re choosing between were in my alliance. So, I went to the other side, to Terry and those guys and said, ‘Varner screwed you over, he’s about to screw us over. Why don’t we get rid of him? He’s playing the middleman.’ And instead of going with it, they stuck with him and ratted me out. And Varner said, ‘If she’s gunning for me, I’m going to take her out.'”

Assuming this is true—and of course, it is Shirin’s version—that’s incredible, and such an interesting story, with her getting caught and then targeted. Even more fascinating to me is that Shirin was, on some level, trying to protect Abi, a member of her alliance, by targeting Jeff Varner. Instead, the edit made it seem like Abi’s hurt feelings led her to stay with the alliance and turn against Shirin.

Why not tell that version of the story? I understand that the editing cannot always include every detail and strategizing is often very complex, but what happened here is not that complicated. Yet it’s a story that was entirely absent from the episode. Why?

Whatever actually happened, the terrible editing that I pointed out in my recap now seems like a way of inventing a new version of the events instead of the above. Again, why?

Update, 9:30 p.m.: I’ll walk back my strong reaction here. I always want to see more, not less, but I have been convinced by others’ arguments that this version of events ultimately jibes with what we saw on television. Even more significantly, Shirin’s responses to this story, below, add additional information—namely, what was discussed at Tribal Council, i.e. not any of this. So, what the editors had to work with wasn’t this full story, and thus the final edit makes more sense.

Even more amazing is the story Shirin tells about what happened after the votes were read but before her torch was snuffed. Shirin used the opportunity to lie in order to help the remaining members of her alliance: She told the tribe that Terry Deitz had a hidden immunity idol.

In her conversation with Dalton Ross and Rob Cesternino, Shirin reveals:

“I said, ‘Terry has the idol, by the way, guys.’ And then everyone starts freaking out, I keep waking up to Jeff. And then Varner’s like, ‘What do you mean? Tell us how do you know!’ And so I start making up stories: I’m like, I saw him digging and burying it, that’s how I caught him. And then I thought Probst, at this point, was going to yell at me. Because as you probably know, he gets pretty strict. I turn around and look at Probst; he this big grin on his face, and he’s like, ‘Anything else?’ … I was doing it to open a door for Kelley and Spencer to stay in there.”

That’s amazing. I’ll ask one more time: Why was that not shown? Why?!