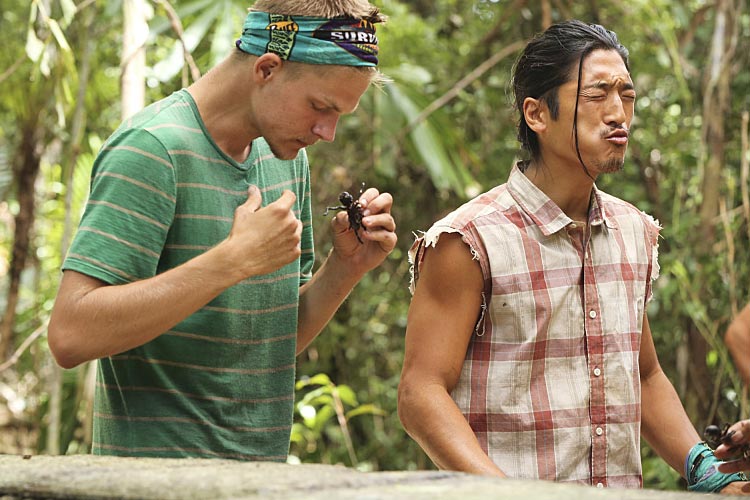 Spencer and Woo eat tarantulas during the immunity challenge. (Photo by Monty Brinton/CBS)

Survivor Cambodia: Second Chance opened and closed with a real-life survival story, one that involved Terry Deitz’s 16-year-old son Danny. Terry left the game after Jeff Probst woke him in the middle of the night with the dire news.

Can you imagine getting on that boat in the dark? Knowing that there’s at least 24 hours of flying and travel ahead before you can be with your child?

Survivor’s production seemed to handle this very well: Probst reveals that within 20 minutes of production getting a call from Terry’s wife, the crew was at the tribe beach telling Terry, while others were making travel plans to get Terry home. Also, Terry called his son immediately after leaving the beach, on the boat, using Probst’s phone. (Probst said that was an “afterthought” so there wasn’t a camera on the boat, which I’m glad there wasn’t, because we did not need to see that phone call.)

Teasing these events in the promo last week—which prompted speculation from the unspoiled about whether Probst’s visit was due to anything from illness to a rule violation—was a little less palatable. CBS’ social media did reveal that it was a family medical emergency, and this unfolded within the first minute, but something like this doesn’t need to be teased to be powerful.

While Terry’s departure did leave us hanging with the question of what actually happened to Terry’s son, the network and producers thankfully included a post-preview tag with Terry and his son. Terry briefly explained that his son had a heart transplant. That was followed by Jeff Probst in a CBS Cares promo during which he advocated for organ donation.

The game moves on without Terry

There was something jarring about shifting from the somber, emotional discussion to “drop your buffs!” and then the greased-up slip-n-slide challenge, always a favorite for comedy and hot sexy moments like watching people who haven’t showered in weeks oil up their dirty, dirty bodies.

But the game moved on, with brand-new tribes that will be shifted again next week when the three tribes merge. Because this tribe switch lasted for one episode, the only real consequence of it that we were privy to was Kass gunning for Spencer, who you may recall are mortal enemies.

Ta Keo won a picnic reward, having successfully tossed more greasy rings at a post, but later lost immunity, perhaps because they were so full and just couldn’t eat another tarantula or balut egg. Having an eating challenge as the immunity challenge really works, as it puts a spotlight on individual players’ ability to perform, far more so than the typical obstacle course-puzzle challenge.

Several clearly struggled not just with eating, but with the effect that had on their tribe. Although Kimmi’s vegetarianism didn’t get in the way of eating a tarantula, it kept her from eating a pig brain and she let Woo win the round (“my gift is to let Woo eat some pig brain”). Still, her tribe was victorious, sending Ta Keo to Tribal Council.

The strategizing started well before the immunity challenge, however. At the new Bayon, Stephen got very, very emotional talking about their opportunity to make a big move and vote out Joe and his underpants. In an interview, Stephen cried about “the idea that I would come up short” and said it would be a mistake “to not take control of the game when we had the chance,” and that voting out Joe “would be the move that set the tenor for the whole season.”

Alas, they never had the chance, because his tribe won immunity.

Previously, Savage declared that he wanted to orchestrate one of the “most devastating, unexpeced blidndsides in the history of Survivor” by voting out Spencer and using Ciera as the pawn. Nu uh, said Ciera.

With a four-three vote split on the horizon, the self-appointed variable became Chaos Kass, who was practically setting off fireworks at camp because she was going to get “revenge on Spencer.” Tribal Council was a wash of bullshitting as everyone talked without saying much.

Ultimately, though, Kass joined with Spencer, Abi, and Ciera to vote out Woo—defeating not just woo, but also Andrew Savage. The biggest surprise was that Abi didn’t jump up and take credit, nor was this framed as her revenge story. There’s only so much faux revenge one episode can handle.