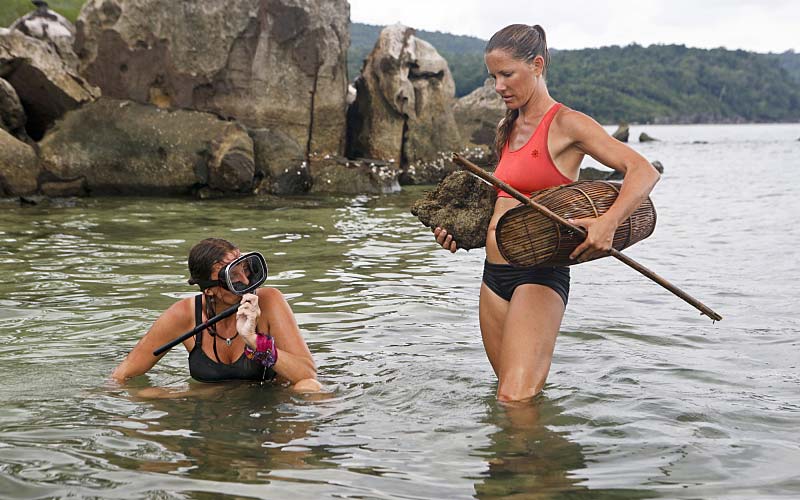 The facial expression Monica delivered at the end of Survivor Cambodia‘s Tribal Council was quite spectacular, and she clearly was blindsided by her alliance. From the first day 12 scene, however, to Jeff Probst’s leading questions at Tribal Council, her exit was anything but a surprise, leading to a kind of oh-okay-fine episode.

If someone hasn’t been on Survivor for weeks and weeks, and suddenly emerges to get into a food fight with Kimmi Kappenberg, that person is not going to make it to the next episode.

Also: The episode was titled “A Snake in the Grass,” which is what Kimmi called Monica—though disappointingly, without any wild hand motions.

Yes, Monica was shocked, but I think more that she was surprised by the cameras and lights, since she’s been gone so much this season I assumed she wandered off to Vietnam. (That actually is where she’s going as a non-jury member, so hopefully she scouted some good places for pho.)

Probst’s questions during Tribal Council were so leading that I’m surprised someone didn’t catch on—though as someone pointed out on Twitter, this, too, was likely just the editing focusing only on the relevant questions from the 45 minutes or so of Tribal Council. Still, he was obvious.

Was this blindside smart strategy?

I don’t quite understand the vote as brilliant strategy, which was attributed to Kimmi. She was annoyed with Monica, starting with Monica’s desire to call Sea Shepherd in to surround all remaining clams in the ocean with small boats so those clams would last for the whole game.

Monica argued this was smart. “I’m not living day to day,” she said. “I’m more looking at the end of the game.” Not quite: At least in terms of that example, Monica was so focused on the future she missed what was in front of her, i.e. an annoyed ally. Also, who knows how long they’d be at that beach?

Then Monica threw out the idea of a women’s alliance, which would obviously include Kelly Wiglesworth, who’s obviously one of the two in new Bayon’s minority. While I have no idea why such alliances need to be arranged by genitalia, it’s not necessarily a bad idea to pull in a member of the two-person minority in the event that there’s another tribe switch or merge soon.

Stephen Fishbach—who’s getting a now-baffingly shitty edit that is trying to make him out as a bumbling fool—made the point that they’d be sending a message to their otherwise-intact original tribe that they weren’t loyal.

Whether the editing or their strategy is to blame, I just can’t quite figure out their rationale. Maybe everyone on Bayon was annoyed by Monica and will treat Jeremy, Stephen, and Kimmi as heroes?

Hey, this season is about second chances apparently

Even if the outcome made little sense, it was an interesting vote, considering that a four-person alliance created a 3-2-1 vote to blindside on of their own. And leading up to that were two strong challenges, even if they were familiar repeats.

Which brings me to by far the worst part of this very good season: the forced narrative of second chances. It’s annoying in part because we’ve had years and years of cast members with second chances—and some have had third and fourth chances.

It’s mostly getting tired fast because everything is framed that way. Both challenges were framed by Jeff Probst as second chances for people who’d played them earlier and lost, which begs the question: While planning challenges for the season, how did the producers know the people who’d played them before would make it this far in the game to have a second chance? Or are they just naming people who’ve played before?

Woo’s story about his mother surviving a heart attack and transplant was touching and inspiring, yet from what I assume were producers’ leading questions to the editing left him framing it as motivation for his own second chance. That’s just a little bit of a stretch. Near-death experience ≠ Survivor. However, for Abi, heart transplant = knee surgery.

If it wasn’t for everything with Monica and Kimmi, I would have been sure Woo’s story was a redemptive edit signaling his impending exit in the game, though it was instead used to foreshadow his losing tribe’s second chance at life in the game.

Yes, Angkor managed to win a tarp by coming in second at the reward challenge, and then actually win the immunity challenge outright. Their performance in the challenges was an impressive comeback for the dysfunctional tribe, and also a reprieve from the relentless focus on Savage, Abi, and that tribe’s misery. I may not quite understand Monica’s exit, but I was thrilled for the change of scenery.