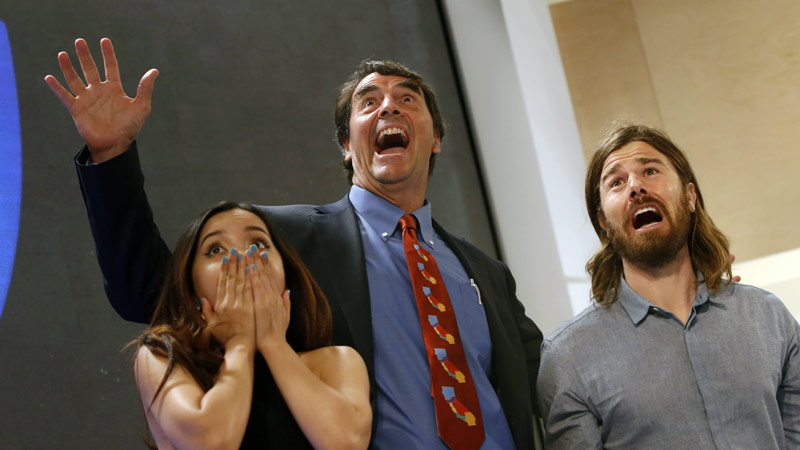 On Startup U's finale, Tim Draper (center) and Michelle Phan and Dan Price react to something, perhaps how terrible some of the startup ideas are. (Photo by Ron Koeberer/ABC Family)

One of the best new shows of the year will conclude at 5 p.m. ET today: Startup U, the Ugly Brothers Studios-produced series about young entrepreneurs in a residential educational program. Low ratings led ABC Family to cast it aside, out of prime-time, but it has continued to be a thoroughly entertaining series, one that deserves a wider audience.

In many ways, this series felt like a throwback to early reality TV, and from me, that’s absolutely a complement. Its cameras observed what happened and edited those moments into themed episodes and season-long arcs. The goofiness, the challenges, the interpersonal drama on the teams—all of that was what would have happened if cameras weren’t there.

Draper University is basically a reality TV show come to life—which is so bizarre I don’t know if I’ve fully processed it—and it was the perfect setting for a television show. Its young amateurs were perfect fodder for reality TV, and in casting, producers chose (from those who’d already been accepted to the school) a strong mix of people to focus on. They also had passion and drive, even if the focus of their enthusiasm was sometimes called into question.

Watching them develop their mostly bad ideas into slightly less bad ideas was interesting, though the show gave less attention to the development of their businesses and more to the weekly activities and learning that was taking place. Considering how not very developed the ideas seemed in the penultimate episode, I’m curious about how much time they spent working on their business versus participating in school-mandated activities.

The end result of the program, and the subject of today’s finale, is a pitch to investors. In a recent episode, program director Charlie Taibi, who often fulfilled the role of camp counselor, told the students in the program, “Last year, almost $50 billion was invested in startups. That’s almost a billion dollars a week. That’s you, tomorrow, if you want it to be you. But you’ve got to want it.”

They also have to have, you know, viable businesses and products, but that didn’t seem to be the case. Romeo in a Box’s founder Erin ordered boxes off Amazon the day before pitching her product, when she realized that the cost of the box and its contents exceeded what someone would pay for it. Tony has a business focused on 3D printing houses, and thinks it can be done but doesn’t really know, and ends up printing a concrete turd as proof of concept.

Carly, the founder of Pretty Litter, has an intriguing idea about cat litter that changes colors if there’s an issue with a cat’s health. Yet days before the pitch, we saw her sitting on the floor of her dorm room mixing existing litter, food coloring, and baking soda, before a fellow student tested it with her own urine.

In other words: They often seemed to have absolutely no idea what they’re doing. With a few notable exceptions and moments of resistance to the Draper University program, however, they really seemed to care about both their ideas and learning.

All of that, their passion, growth, and missteps. made for compelling television—someone peed on cat litter to see if it would change color even though it was not color-changing cat litter!

And, as I had to remind myself while watching, the cast members’ learning was the point of their presence at Draper University. It’s for 18- to 28-year-olds who pay money to get basic help; the program is designed “to help you learn how to start a startup, and opportunities to build your entrepreneurial network and get mentoring,” according to its web site. Draper U. is not an incubator nor an accelerator like Y Combinator. (Speaking of: There needs to be a Y Combinator documentary series.)

Although it concludes with pitching before VCs, and an investment for the best-in-class business/idea, the cast and their potential businesses seem far away from Shark Tank; they’re not even on the level of people who show up and are dismissed by the sharks as coming in too early, or having a product, not a business.

Actually, Startup U basically functions as a prequel to shows like Shark Tank. Considering how it didn’t resonate with ABC Family’s audience, and/or ABC Family, I’d love to see Startup U move to CNBC for a second season and be paired with Shark Tank and The Profit, where, in that order, they represent various stages of investment and maturity of a business. That’s probably unlikely because Hollywood, but maybe with a new title and modified tone, a show set at Draper U could work elsewhere.

As difficult as it may be to get new reality shows on the air now, there also seems to be a disturbing new trend: networks abandoning creatively strong shows that have failed to perform. (The corollary is the bizarre way networks sometimes get behind shows that everyone knows just aren’t working or are destined to fail.) Yes, it’s an extraordinary challenge to get viewers to sample or watch something with so much new television, but sometimes it seems like some networks don’t even bother to try sometimes, giving up before they even really start. The passion of the cast and producers was on screen, waiting for the right audience.

Again, I’m not pretending it’s easy to publicize and market a new, untested show, but it’d help if networks believed in the great products they have as much as the Startup U entrepreneurs believe in their bad ones.