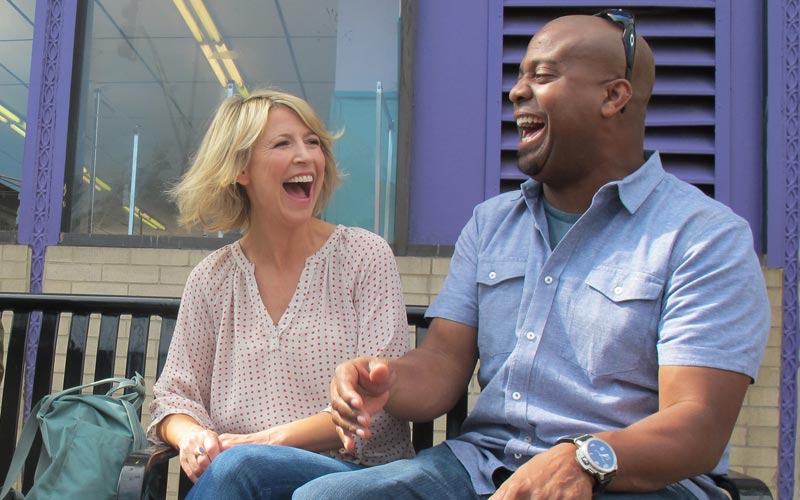 Samantha Brown has been taking me on vacations for years.

Okay, I’ve never actually met her, and only talked to her on the phone once now, but I’ve spent many weekend hours on the couch watching shows such as Great Hotels or Great Weekends, escaping for a few moments into another country or a theme park. Her joy is irresistible, and makes me the shows so much more engaging than the mere advertorials they are at their core.

Samantha’s personality anchors the glossy footage of places that Travel Channel does so well, making everything seem accessible, human, real. And that’s by design: Since the start of her career, Samantha told me when we talked recently, she’s been focused on being a person people would want to travel with.

She certainly has been a terrific television travel companion, and now, she’s actually taking people along with her. Her new Travel Channel show 50/50, co-hosted with Chris Grundy, has a remarkable premise: they ask random strangers to go with them on a 50-hour trip worth $50,000.

Ambushing people for a 50-hour trip

The pilot for the new travel reality series was filmed about a year ago, and in this case, the pilot was a critical proof of concept. “The network didn’t know if it could exist,” Samantha told me. “Would people go with us?”

They did, and filming on the rest of the episodes began this June. But the show debuted last week with a stunt episode filmed as part of The Today Show in August that’s not really representative of the series. The episode that airs Sunday at 7 p.m. will be the first true episode of 50/50: Samantha Brown and Chris Grundy approaching strangers on the streets, asking them to leave that afternoon.

So how exactly do they get people to say yes?

Unlike, say, Cash Cab, the people Samantha and Chris approach have not been pre-screened. They’re literally choosing random people off the street. (Again, last Sunday’s premiere was an exception, since The Today Show wanted to pick the participants via a competition.)

“It is absolutely, completely random,” she told me. “We just start out a really casual conversation” and determine if “we would just want to hang out with them for two days.” They started early because flights were typically scheduled for mid-afternoon.

It may seem counterintuitive, but Samantha and Chris were actually looking for people to reject their offer. “We kind of want to go with the people we think are going to say no,” she said. “It needs to be a challenge to go. We want people who really want to go but really have some obstacles to be there.”

Ultimately, they’re looking for a couple—which includes partners, best friends, spouses, people who’ve been dating for just one month—but the nature of randomly approaching people means they’re often talking to just one person, who then has to get their partner to agree, too. Samantha told me that “there have been times where we’ve gotten a couple, they’re all set to go, and their kids flipped out” about them leaving, so they didn’t go. “They knew that they were making a mistake.”

Unlike the casting, the 50-hour trips are planned. “It’s definitely mapped out. Every decision, there is a choice,” she said. For example, “when we arrive: Do you want to stay at this luxury suite hotel, or this private villa? Usually we give them, with their choices, a contrast.”

The hosts play into that choice: “We definitely can play devil’s advocate,” Samantha said, admitting that “we can play a little dirty” when one co-host prefers one option and the other disagrees.

The hotels, restaurants, businesses, and other locations know that they might be chosen, and get a call from the producers to let them know if they’ll be there or not. Those that aren’t chosen still get visited by a camera crew to capture B-roll footage, which is presented in the episode to allow viewers at home to consider which option they’d choose.

While a typical shoot for a half-hour travel show takes four days, this show takes only three—and as a mother of 2.5-year-old twins, Samantha told me that she appreciates the “fast and furious” schedule.

That’s because, filming various series, she can be away from home 15 days a month. (A future, not-yet-scheduled series is Track Down Samantha Brown, on which “you have to guess” where she is. Samantha said that was “a hard show to shoot” in comparison, in part because concealing signage, language, and other revealing details is difficult.)

Traveling with a camera crew 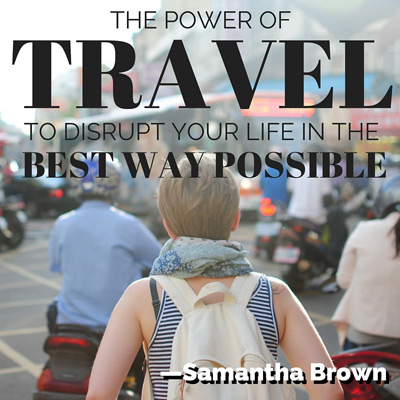 When Samantha Brown is not filming travel series, she still travels, though her family will often combine her work with vacation. She told me that “it’s really nice to wake up in the morning and not have to be on camera,” and said it was “an adjustment in the beginning” to get used to the lack of privacy.

While traveling with “a huge camera crew can really slow you down,” she said, she’s also grown to appreciate the benefits. “Everything is basically done for us: how we’re getting from point A to point B. It’s really nice to be taken care of.” On her own, “no one’s bringing me lunch; no one’s figured out where we’re going to stop and have a coffee break.”

Samantha has been traveling with camera crews since a successful yet harrowing audition in 1999. She’s embraced her knowledge—or lack thereof.

“When I first started, I wasn’t a traveler, I didn’t have that background,” Samantha told me. “I wanted to be less of a host, less of an expert, just a real person who people wanted to travel with. I was discovering the world for the first time and I really wanted the viewers to go along on this really fascinating journey with me. I wasn’t an expert so I didn’t want to pretend that I was.”

“It’s really amazing to literally have people with me along the way,” she added. And 50/50 allows her to share that experience and illustrate what she loves about travel.

“We take people out of their normal, everyday lives and take them to a destination that’s extraordinary,” she said. “It really shows the power of travel to disrupt your life in the best way possible.”