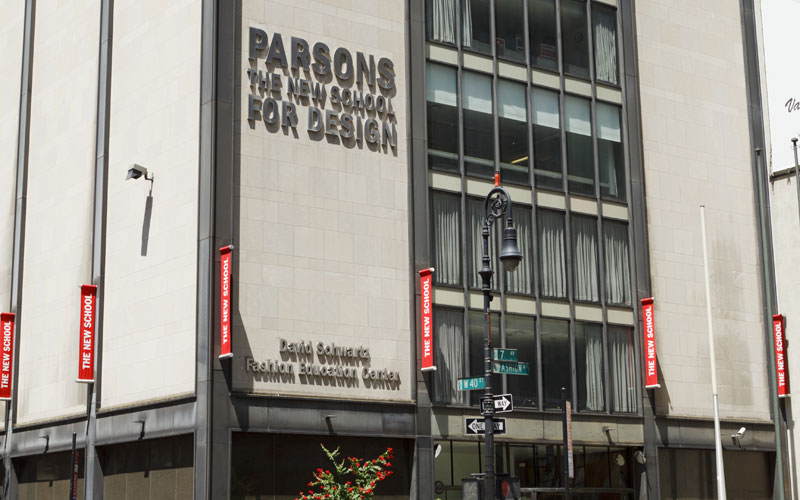 The building that used to house Parsons and host Project Runway, which is being demolished for a hotel. (Photo by DW Labs Incorporated/Shutterstock)

Since 2004, Project Runway‘s home and filming location has been the Parsons School of Design in New York City. It’s where the workroom and the runway were located, and it was a five-minutes, 0.2 mile walk from Mood.

Parsons also gave us Tim Gunn, who taught there and was supposed to just be an off-camera adviser when the show started. For years, he stayed at the school even after the show took off. (Despite being the show’s accidental, break-out star, he was paid nothing at first, and as late as the fourth season, Tim relied on his Parsons salary to pay his bills.)

But Parsons hasn’t been shown at all during Project Runway 14, and there has been just one trip to Mood; most challenges have used pre-selected fabrics or unconventional materials.

That’s because the building that hosted the school and the show is being demolished so a 29-story hotel can be built there. The building, located at 7th Avenue and 40th Street W, had a synagogue on its first floor. The New York Times reported that, “[b]y the end of the year, demolition will begin.”

While the synagogue will remain the same location, as part of the new building, Parsons has moved on. Parsons School of Design is now located at 66 Fifth Avenue in Greenwich Village.

Why did the show not move along with Parsons? A representative from the school told me:

“For a number of years, the show had been filmed at Parsons’ former fashion building in Midtown Manhattan. However, when Parsons moved its fashion school to Greenwich Village to join the rest of The New School campus, the university no longer had the facilities to accommodate the program.”

In other words, it was not the show’s choice to move.

Where Project Runway is filmed now

On Project Runway 14, the workroom and runway spaces seems so similar to previous seasons, I didn’t notice the lack of Parsons establishing shots at first, until the designers and Tim Gunn finally went to Mood and I realized what had been missing. As it turns out, those interiors were created on a soundstage about two miles to the east of the old location.

Project Runway executive producer Sara Rea told me that the show moved to GUM Studios in Long Island City, which is near the Queens Midtown Tunnel. It’s a new facility that opened earlier this year, having relocated from South Williamsburg.

I asked if the move affected the production in any way, and Rea said, via Lifetime:

“The move did not affect production. Most of the time spent on the show is in the workroom and that never changed.

We go to Mood various times through the season as it warrants for the challenge. If its an unconventional challenge (as they have already been multiple thus far this season) there is no reason for the designers to go to Mood.  You will definitely see them there as the season continues.”